Forbidden Kingdom of the Wolves- A Roleplay discussion

An extension of the Leaf Tribe forest

Stone leapt onto a boulder in the shady forest, and let out a deafening howl, warning others to stay away. Stone leapt off, racing through the forest at top speed until he padded onto boulder that went off the edge of just a small Rocky Mountain of stones and boulders

I leave my past behind. Age cannot define me nor my fangs.

Tribes are flimsy promises of security. The real life of a wolf is alone, roughing it in the wilderness.

You cannot hide form me. I will track you down.


Personality :
Onyx is clever and sly. She hangs around Tribe territories, harassing wolves stupid enough to go out alone and stealing prey. She always asks for materials such as leather from pelts when she returns her quarry. Onyx never trusts anyone and is always taking advantage of others.

I don't walk. I saunter, because I know nobody can hurt me. 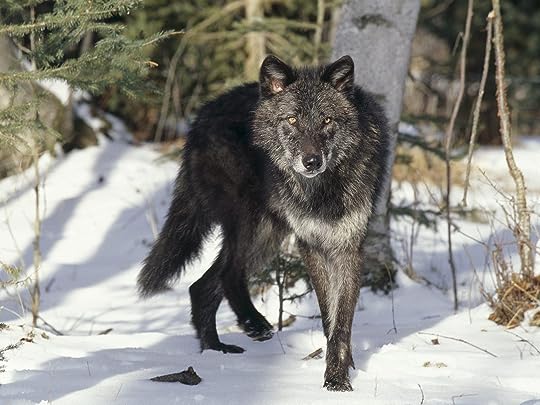 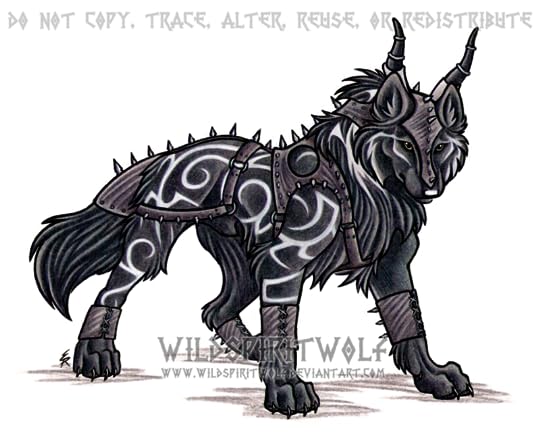 (just leg armor)
She wears a wolf skull without the lower jaw over her own face that fits her like a mask and has been colored black and red to strike fear in her enemies.

"Mom?" Onyx squeaked. She had hidden like her mother had asked, right before the Tribe wolves attacked. She clawed out of the brambles and gasped. Her mother lay on the group, blood pooling from her neck. Onyx rushed over.
"Mommy, Mommy, don't die," she pleaded, pushing her nose into her mother's cold fur. "Wake up Mommy..."
Onyx cried all night, curled up in her mother's body. She stayed awake until dawn, then spent the rest of the day digging a huge hole until her claws hurt. Anger had taken over now, making her work relentlessly. She buried her mother at sundown, vowing to avenge her death. Then she set off into the forest, not looking back.

Onyx put on a burst of speed and brought down the deer. She dug into its soft belly while it was still warm. She remembered her mother as she ate, which was rare. She barely thought about her anymore. Onyx pushed aside the thought and continued eating until she couldn't anymore. She picked up the carcass and dragged it back to her temporary den so no Tribe wolves could get it. She had purposefully hunted in their territory, as if to punish them for the unfairness in her life, all of which was their fault.

She was getting close. Onyx always knew when she was. The scent trail became rushed and panicked as her quarry realized she was right on their tail. How fortunate that she had realized the way to properly deal with the Tribes. Her nose was too good to just use for hunting. Why not take advantage of her worst enemies while she was at it? She slowed to a halt. The runaway criminal was just ahead, stopping for a break. She crept forward, haunches waggling, ready to strike.

Family? The Tribes killed my only family. The only real family I have is my skill and my sense of revenge.

Friends mean nothing. They are fake.

Other:
Has a sense of revenge for the Tribes after how they treated her.

(Ok, done and if I need to remember her things and everything I'll just go to this post)

Onyx followed the wolf from a distance. He seemed likely to know a place where she could find her quarry. She was careful to stay downwind and bounded forward, trapping Stone. Behind him was a drop, in front of him was her.
"You."
She narrowed her eyes.

Stone snapped his gaze to Onyx, "What do you want?" Stone's tone was light, no hit of growl in it. Stone's fluffy tail brushed the leaves on the ground as he sniffed the air, 'She doesn't smell like any wolf I've seen or met before' Stone thought

Onyx growled at his tone.
"I need you to help me," she said, lifting her muzzle. "Do you recognize this scent?"
She tugged a few hairs from a wolf pelt from between her claws in tossed them in his direction.

((Gtg bed you're two hours behind me))

Warlordess EmeraldBookDragon, Songbird of the Seas and Wise Siren of the Mountain wrote: "Onyx growled at his tone.
"I need you to help me," she said, lifting her muzzle. "Do you recognize this scent?"
She tugged a few hairs from a wolf pelt from between her claws in tossed them in his..."

Stone nodded, "Smells like one of the tribe wolves that hang around here" Stone then added to Onyx, "Why?"

Onyx snorted.
"Then your nose is as dull as a badger's. This is the fur of a criminal," she snapped. "And you're going to help me find him."

"I don't have to" Stone looked Onyx in the eye, he didn't seem like a threat but boy would he have surprises for her! "If that wolf is a criminal I'll be glad to hunt him down but still, what did he do?"

Onyx saw the threat in his eyes and growled a warning. She was not one to be trifled with.
"That is between my employers and me," she said, baring her teeth. "And if you value having all four limbs I suggest you help. I am not in a benevolent mood."

Stone glared at her, "I'll help you track him down" Stone added to himself, "Don't have to be angry" Stone grumbled. Stone lifted his head, leaping off the stack of stones and boulders

reply | flag *
message 24: by [deleted user] (new)
Apr 03, 2016 09:47PM
Fortis, a Leaf Tribe commoner, wandered farther from his log than he thought he had, in search of herbs that had begun to seed, wandering farther and farther away from the Tribe's border.

Toboe wandered through the forest sniffing the air for fellow wolves as he went. He didn't particularly like being so far out his tribes borders, but on a cold day such as this, he needed to get to lower group lest he freeze to death.

reply | flag *
message 28: by [deleted user] (new)
Apr 03, 2016 10:01PM
(ok, thank you, now on with the show) Fortis, smelling around for herbs, smelled a young wolf, seeming to be sort of just wandering around aimlessly. though Fortis, not being necessarily young, was not afraid of the young wolf, but decided it would be wise to exercise caution.

When Toboe notice the older wolf, he wasn't sure what to do. He could tell just by the wolf's scent that she was from Leaf tribe. However, he also knew that this was neutral group so they had no reason to fight. Eventually he decided to approach cautiously, not knowing she was friend or foe.

reply | flag *
message 30: by [deleted user] (new)
Apr 03, 2016 10:13PM
(Fortis is a male, sorry i didn't make that clearer) Fortis saw the younger wolf emerge from behind a tree and said, a bit to obviously cautious "hello, be you friend or be you foe?" after hearing himself realized that he was more nervous than he had originally thought.

"I am Toboe of Breeze Tribe, I'm not here for a fight. I'm just here to escape the cold for a bit," Toboe answered, relaxing as he could tell that if this older wolf was nervous as well then obviously he didn't have anything to worry about.

((No prob sorry for getting the gender confused.))

"well, i am Fortis of the Leaf Tribe," he said "i am searching for seeding herbs" he thought for a minute and then asked "why are you inside the Leaf Tribe border, it's dangerous for outsiders here?"

"Oh really, cool! I don't know much about plants, but I could help you if you want," Toboe said before shifting embarrassedly at the mention of trespassing. "Sorry Ithought this was neutral ground like I said I am trying to get out of the cold, but if this is your land I'll just leave."

reply | flag *
message 35: by [deleted user] (new)
Apr 03, 2016 10:46PM
Fortis, being slightly confused about the neutral ground thing asked "this i Leaf Tribe territory, isn't it? if not, well, most of Leaf Tribe's Territory is new to me, so it makes sense if i left by accident." he didn't much notice the border (if there is any way to tell the difference) during his walks, but he didn't think about it much either. "anyway, if this is still Leaf Tribe Territory, i won't tell anyone. it would have been an accident, and there is still the likely chance i have wandered outside of the border. and i would love some help, thank you."

reply | flag *
message 36: by [deleted user] (new)
Apr 03, 2016 10:52PM
he then said after a bit of an embarrassed pause, said "i apologize if i ramble a bit, people don't generally talk to me, it's a thing that happens when you live inside a log in the middle of a large forest"

"It's alright, I just wanted to make sure I respected your tribe's border. What does this plant look like by way?" Toboe asked in the hoping to settle this birder issue and get on with finding this seed pod.

"Well, that sounds like something that would grow in my territory, not here in warmer parts," Toboe replied. ((It's alright! :))

Forbidden Kingdom of the Wolves- A Roleplay