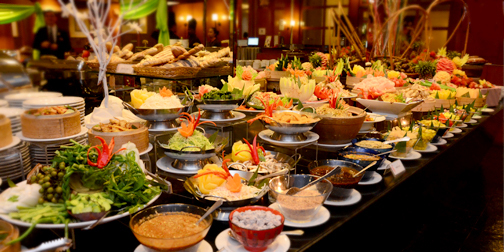 Derek rolled up to the buffet line, scowling as his cast bumped the edge of the table. Stupid casts, he thought. Stupid chair. Stupid ice. He spent much of his time thinking that. Ever since he'd slipped and broken his legs a few weeks ago, he'd been bitter and sullen. While he was never the most talkative person, he would at least smile sometimes. Now you were lucky if he only gave you a blank stare.

He grabbed a plate and set it in his lap and moved down the line slowly, adding what he wanted to the dish. When he came to the end of the meat section, there was the some brisket. He leaned forward to get some, but he couldn't reach it from his position and he didn't dare try and rise up because then he'd dump his plate on the ground. He cursed under his breath.

Aghulli spent a copious amount of time near the sweets end of the table, contemplating what to eat first. Though, several looks of carefully directed judgement had her moving away from the spot before she could make much of a decision. She didn't need people the same age as her looking down on her eating habits, and as much as she would have liked to let them know that, she had been warned to be on some sort of good behavior for the party. Glancing around, she caught sight of Derek in his chair. Unlike the other agents that didn't seem to know whether to offer help or not, she strolled ( read: skipped ) over to where he was. "Having difficulties," she inquired, though it sounded more like a statement.

Derek turned to look at Aghulli. "No, I'm not," he grumbled, still in a sour mood and glaring at the meat. He tried one more time to reach for it but almost spilled the plate in his lap. "Yes," he finally admitted to her. "I can't reach it because of this damned chair and I'm in this damned chair because of an icy rooftop." He glared at his legs, as though they were the ones responsible for the ice on the roof. Because of that one mistake, he was out of commission for two months in the casts or longer if his bones didn't heal and then there was the physical therapy he'd have to attend.

Aghulli watched his second attempt to get the brisket dubiously. Brows raised as he admitted defeat, she retrieved the meats for him without a word and a small smile. "You'll be out of that chair in no time," she chirped, surprisingly positive. Perhaps if it were someone else, she might have laughed and watched them struggle a little longer before doing anything. It was always fun to see a little helplessness in people, especially the kind that would imply they'd have no means of getting away. "And while you're in the chair you can have people doing whatever you need for you."

Derek snorted, though he nodded his head in thanks to her. "I'd rather be out in the field than having people do things for me. I hate this. I can't train. I can't go on missions for at least three or four more months." And even then it might take longer for him to get back into shape. He was at the mercy of their doctors to tell him when he was fit to go back to work. He settled the plate more in his lap.

At this, Aghulli frowned. "I thought guys liked women dressing up in nurses' uniforms doing anything they asked," she stated, brows furrowed, "And I'd certainly like not having to lift a finger for anything I want." Lips pursed, she set her empty plate down on the buffet table, not much in the mood for anything other than sweets. "Like now; I could do anything you asked." Smile returning, she moved to grasp at the handles on the back of his wheelchair. "Like, push you around!"

Derek shook his head at her. "You know, not all guys are the same. I don't like being helpless. I can't do anything and I'm at the mercy of other people. Like right now. You could push me off of something or out a window and I'd be unable to stop you. You have complete control and I don't." He twisted a bit in his seat to look up at her. He didn't have to look up far. "How would you feel if you were stuck in a chair for two months?"