This topic is about George A. Romero's Empire of the Dead
6 views
NEWS > AMC coming out with a Zombie/Vampire TV series next year

Mod
Yes, AMC will be coming out with yet another zombie television show next year called Empire of the Dead. This show however will not just feature zombies…but vampires as well.

The series will be based off of a graphic novel, which was written by George A. Romero, director of the original 1968 classic zombie film Night of the Living Dead. It looks like Romero will be behind the TV show as well.

I’m actually shocked that not only have I not read Empire of the Dead, but that I have never even heard of the series before being that I am a huge fan of zombies and vampires as well a comic book reader and comic book artist. There’s not much information on what it’s about from what I have read online at least, but from looking at some of the artwork it looks like vampires are using zombies as slaves. Perhaps I’ll ask Santa Claus for a copy of the graphic novel this year so I can read it and see for myself.

It seems like a lot of people find it funny that AMC is doing this since their number one show is The Walking Dead and they also have it’s spin-off (or prequel) Fear The Walking Dead, so now they’ll have a third zombie show. Me, I think its badass because it’s a zombies vs. vampires show. Zombies and vampires are often compared to one another because they are both “undead”. Also, who knows zombies better than Romero, let’s see how he does with vampires.

You know, Guillermo del Toro promised everyone that he was going to “save the vampire” with The Strain (when he said save it, he obviously sees that Twilight pretty much ruined the whole genre). I have not read the books but I have seen the TV show and...it’s okay. However, his type of vampire is not really the kind I prefer, they are more like bloodsucking aliens than vampires to me. I prefer the “classic” or “traditional” vampire; undead monsters with fangs that sleep in coffins, killed only by sunlight and wooden stakes, etc. However, points to him for trying. Well we’ve got The Strain, Lady Gaga is a vampire on American Horror Story: Hotel and now there is going to be an Empire of the Dead TV show…so maybe there is hope for all us true vampire fans.

Interesting news... I love vampires, and zombies. In fact, most types of horror creatures are fine by me. There have been many pairings of such creatures over the years; typically vampires and werewolves, but also Frankenstein, the Wolf Man, even aliens or the Mummy. But I have not seen vampires and zombies paired up before... Personally I think that is an interesting combo. Okay, the vampire is a swiftly moving, intelligent being, whereas the zombie is incognisant and often (though not always) moves slowly, so at first glance there is no contest. But a suave, lone vampire cornered in some dark crypt by a horde of infected zombies in frenzy - to me that could have interesting results...
I actually have just written and published the first book from my trilogy on that very mashup ("Once Bitten, Twice Die") and so to see that subject on the silver screen will, for me, be actually extremely interesting... I look forward to it even more than I am anticipating the new Star Wars film... Thanks for the post Dan. Bring on the Empire of the Dead...

I'll check out 'Year of the Dead'. Looks interesting... Thanks...

Mod
Antony wrote: "Interesting news... I love vampires, and zombies. In fact, most types of horror creatures are fine by me. There have been many pairings of such creatures over the years; typically vampires and were..."

Yes, I love all horror creatures as well. Vampires have always been my favorite, but the rest are awesome. It all started when I saw this 1987 film when I was a kid called The Monster Squad. It's about a bunch of kids in a small American town who go from having a "monster club" in their tree house to not only finding out that Dracula, the Wolfman, the Mummy, The creature from the black lagoon and Frankenstein's monster are not just in the movies but are real, and that they are the only people to stop them and Dracula's plot to shift the balance between good and evil (although Frankenstein's monster turns out to actually be good and tries to help them). I guess I Iiked it because it was a bunch of kids my age kicking the shit out of scary monsters. It kind of feels like The Goonies only instead of going after pirates' treasure, the kids are out to kill monsters. However, the director said the original idea was "what if the little rascals met the Universal monsters?". It was pretty popular with other kids at the time and introduced a whole new generation to those characters. So if it weren't for that film, I probably wouldn't be reading horror or even talking about vampires, etc. today.

So Thanks, Fred Dekker for making this awesome movie... 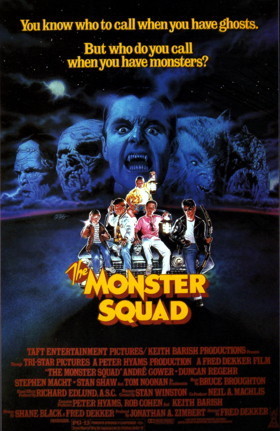 Love the concept - some light-hearted fun. It doesn't always have to be genre-faithful, it can just be pure escapism...

Mod
Antony wrote: "Love the concept - some light-hearted fun. It doesn't always have to be genre-faithful, it can just be pure escapism..."

What do you mean by that?

Just that it doesn't always have to stick to the exact same genre. I am sure this film was light-hearted and good fun for it... S'all...

Mod
I was talking about The Monster Squad movie and how I loved it so much when I was a kid. Also how it got me into monsters and horror. I don't get what that comment has to do with that.

Never heard of the Monster Squad before, but it really looks like fun as Antony suggested - will have to research that one. And there are never enough zombie/vampire shows out there I guess :)

I'm not surprised AMC wants to run yet another show - as long as there's money to make with that genre, they sure want to get it.

Dan wrote: "I was talking about The Monster Squad movie and how I loved it so much when I was a kid. Also how it got me into monsters and horror. I don't get what that comment has to do with that."

Err, I was kinda agreeing with you. No offense meant.

Year of the Dead (other topics)