This next sketch didn't interest me that much other than making me wonder once again, if women, some women, really do act this way. The sketch is titled "Miss Evans and the Eagle" and was first published in Bell's Life in London on October 4, 1835. The eagle of the title - reminded me of Bleak House and Peter's bird count and wondered how many birds we would be coming across in this one sketch, but as close as I can remember the eagle was the only bird in the sketch and that wasn't a bird it was place to go. According to the notes in my copy of the book the Eagle was:

"Famous tavern and pleasure garden in the City Road, with a Grecian Saloon for dancing and sideshows, attracting crowds of up to 6,000 customers a night. Demolished in 1901 and rebuilt as a public house, which still stands."

I found that more interesting than Miss Jemima Evans, her friend and their young men. Especially when the ladies in the sketch:

"after a great blushing and giggling, and hiding of faces in elaborate pocket-handkerchiefs, they consented to do. Having tasted it once, they were easily prevailed upon to taste it again; and they sat out in the garden tasting shrub, and looking at the Busses alternately, till it was just the proper time to go to the Eagle; and then they resumed their journey, and walked very fast, for fear they should lose the beginning of the concert in the Rotunda. "

That blushing and giggling part reminds me of how my 16 year old niece can whisper and laugh and giggle with her friends constantly, or at least it seems constant, until I'm ready to throw something at them. But all the "waistcoat and whiskers" staring and winking at J'mima and her friend, and the young men showing symptoms of 'boiling over' and the girls threatening to faint away on the spot gets on my nerves, although how you manage to faint on demand is beyond me. But leaving J'mima and her friends to be taken home in a hackney coach I'm going back to the Eagle. Here is a picture of it: 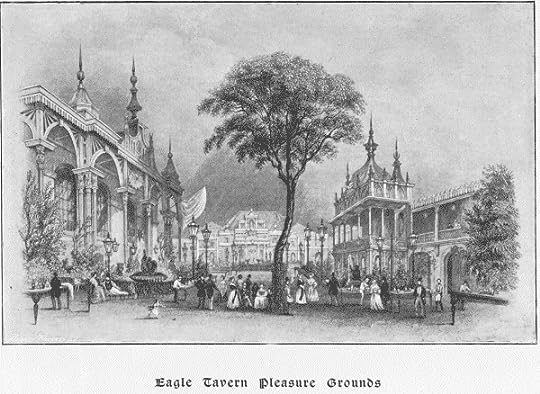 And here are some interesting things I've found pertaining to the Eagle. The first thing I found (other than the picture) is that it was said to have gained a wide reputation because of this popular song:

"Up and down the City Road
In and out the Eagle
That's the way the money goes;
Pop goes the Weasel."
- OLD SONG

My only problem with this, other than never having realized the silly song was considered overly popular, is that I knew it as a child and didn't know those words, not the first two lines anyway. The way I remember it had something to do with a monkey chasing a weasel around a mulberry bush, or something like that. Anyway, the next thing I came across was this old advertisment:

PROPRIETOR, Mr. T. ROUSE.- Unrivalled Galas, with brilliant fireworks, and splendid illuminations, and a series of superior amusements, every Monday and Wednesday. To attempt a description of the numerous and varied sources of entertainment at this unrivalled establishment would be vain. Concert in the open air, dancing and vaudeville in the Saloon, set paintings, cosmoramas, fountains, grottos, elegant buildings, arcade, colonnade, grounds, statuary, singing, music, &c.; render it a fairy scene, of which a due estimate can only be formed by inspection. Open every evening. On Thursday a Benefit, for the Laudable Pension Society, Bethnal Green. See bills.
The whole under the direction of Mr. Raymond. Brilliant Discharge of Fireworks, By the inimitable British Artist Thomas Brock.
A Band will be stationed in the Temples, To play during the Evening.

Admission 2s.
The Doors will open at Five o'clock.

And then there is this coming twelve years later:

"EAGLE TAVERN, CITY ROAD. A place of public entertainment, frequented by the lower orders, and licensed for theatrical purposes pursuant to Act 25 Geo. II. It stands on the site of "The Shepherd and Shepherdess," a tea-house and garden, noted some sixty years since. Taverns of this description has seriously injured the minor theatres, as at houses like the Eagle, with both a music and a spirit licence, people can see, hear, and drink; at theatres they can only see and hear.

And now I am done with this sketch and am moving on to the next one, after that I may go look up the weasel song if I still have any interest in reliving that part of my childhood. 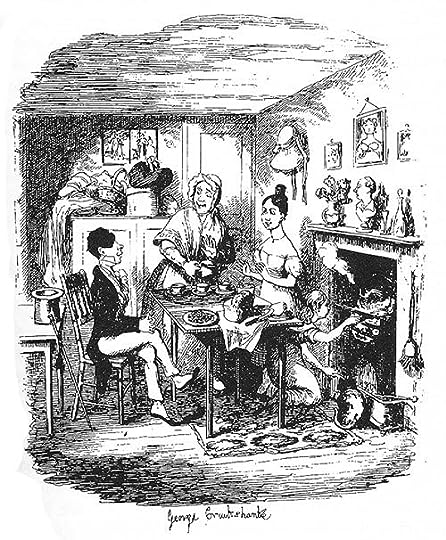 Here is an illustration by Fred Barnard: 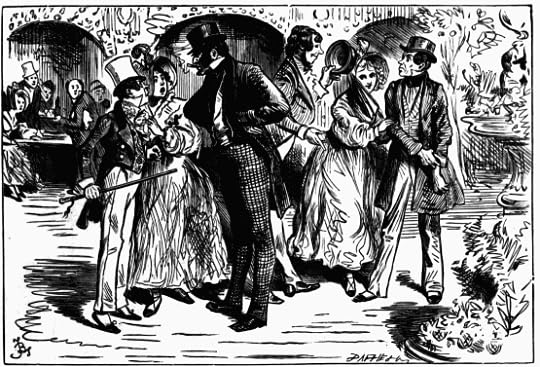 "What do you mean by that, Scoundrel?" exclaimed Mr. Samuel Wilkins. . . . "What's the matter with you, you little Humbug?" replied Whiskers."

like you, I did not particularly take to this Sketch and to the insipid behaviour of both males and females described here. I didn't even find it very hilarious.

Nevertheless, thanks a lot for the extra information you gave here!

Kim wrote: "This next sketch didn't interest me that much other than making me wonder once again, if women, some women, really do act this way. The sketch is titled "Miss Evans and the Eagle" and was first pub..."

"People can see, hear and drink; at theatres they can only see and hear." I lol when I read this description of the Eagle Tavern.

Thank you Kim for remembering me when you saw a reference to a bird. While there was no feathered bird in the story, it was still a bird reference.

Peter wrote: "People can see, hear and drink; at theatres they can only see and hear." I lol when I read this description of the Eagle Tavern."

Yes, I too laughed at that description, it also had me a little confused since I thought I was reading old advertisements of London businesses and this didn't seem to be very flattering of an advertisement. I finally decided with phrases like that and the "A place of public entertainment, frequented by the lower orders," it couldn't have been written as an advertisement. It wouldn't have talked me into going there anyway.

Peter wrote: ""People can see, hear and drink; at theatres they can only see and hear.""

That's why I always prefer the pictures over the theatre. Just try opening a bag of crisps during an opera or a play, and see what is going to happen. In Shakespeare's days people also ate and drank during the show, and they had Shakespeare and not some kind of new-fangled experimental theatre ;-)