Our next sketch is found at a very appropriate place, just following the Christmas sketch is "The New Year", which was first published in Bell's Life in London on January 3, 1836. The sketch begins with this:

" Next to Christmas-day, the most pleasant annual epoch in existence is the advent of the New Year. There are a lachrymose set of people who usher in the New Year with watching and fasting, as if they were bound to attend as chief mourners at the obsequies of the old one. Now, we cannot but think it a great deal more complimentary, both to the old year that has rolled away, and to the New Year that is just beginning to dawn upon us, to see the old fellow out, and the new one in, with gaiety and glee."

Dickens goes on to say that he is seated by the fireside on the last night of the year, writing the article" with as jovial a face as if nothing extraordinary had happened, or was about to happen, to disturb our good humour."

This is how I often picture him, sitting at a desk next to a fireplace just looking out the window and writing down what he sees. Not what I see, but what he sees, which is so much more than I would ever see. He tells us about the hackney-coaches and carriages rattling up and down the street taking smartly dressed people, he imagines, to crowded parties. He then goes on to describe one of these parties "as well as if we were duly dress-coated and pumped, and had just been announced at the drawing-room door."

"Take the house with the green blinds for instance. We know it is a quadrille party, because we saw some men taking up the front drawing-room carpet while we sat at breakfast this morning, and if further evidence be required, and we must tell the truth, we just now saw one of the young ladies 'doing' another of the young ladies' hair, near one of the bedroom windows, in an unusual style of splendour, which nothing else but a quadrille party could possibly justify."

Most of the rest of the sketch centers on Mr. Tupple, the "perfect ladies' man - such a delightful companion, too!"

"Tupple rubs his hands very hard, and smiles as if it were all capital fun, and keeps constantly bowing and turning himself round, till the whole family have been introduced, when he glides into a chair at the corner of the sofa, and opens a miscellaneous conversation with the young ladies upon the weather, and the theatres, and the old year, and the last new murder, and the balloon, and the ladies' sleeves, and the festivities of the season, and a great many other topics of small talk."

I suppose it is good the sketch isn't longer because I could have grown tired of Mr. Tupple rather quickly. And the rest of the party and the sketch, is spent happily eating, drinking, dancing, toasting, and all the usual New Year's Eve party things. That brought me back to the beginning when Dickens first told us to see the new year in with "gaiety and glee" which brings to mind the thought that I have never brought in the New Year with gaiety and glee. I rather like New Year's Eve, but it is usually spent right here and rather peacefully. And I've always felt rather sorry for the old year, everyone else - like all those standing out in the cold in New York City waiting for the ball to drop, seem so happy to be getting rid of the old year and getting into the new one as soon as possible, I would think the old year had been absolutely horrible. But usually there are good things to look back on at the end of every year and I find that I am going to miss it, but that's just me. Even Dickens though, with his talk of gaiety and glee doesn't sound particularly cheerful with his last paragraph:

"We have scarcely written the last word of the previous sentence, when the first stroke of twelve, peals from the neighbouring churches. There certainly - we must confess it now - is something awful in the sound. Strictly speaking, it may not be more impressive now, than at any other time; for the hours steal as swiftly on, at other periods, and their flight is little heeded. But, we measure man's life by years, and it is a solemn knell that warns us we have passed another of the landmarks which stands between us and the grave. Disguise it as we may, the reflection will force itself on our minds, that when the next bell announces the arrival of a new year, we may be insensible alike of the timely warning we have so often neglected, and of all the warm feelings that glow within us now."

It is quite interesting to note and quite impressive to realize that Dickens can write such warm, family-centred and celebratory stories such as Christmas and The New Year and also present such horrors and depression with the stories on gin shops and the prison system.

The wide range and topicality certainly give us much early evidence of what was to come in his novels.

I actually don't like New Year's Eve at all and I have stopped celebrating it for a long time. Another year has gone by, and usually times are no longer what they used to be. A colleague of mine, who knows me as a man bent on proving that things used to be better than they are, a few weeks ago sent me a postcard that made me laugh.

It has the picture of a grump and a speech bubble saying: "Everything used to be better in the old days - even the future."

As to Mr. Tupple, why he is quite a sycophant, isn't he?

Kim wrote: "This is how I often picture him, sitting at a desk next to a fireplace just looking out the window and writing down what he sees."

What amazes me most about Dickens is that he actually seemed to have written a chapter or two when guests were present. At least, that is what they told me in Gads Hill Place. From time to time he would join his family's guests in the drawing room, sitting at a desk and write and then read out his harvest to his family and guest. I don't know if this is true, but at least it is a wonderful story. 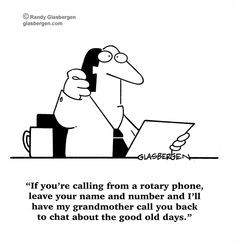 Could we make it a conference call so I can talk to people of like minds?

Sounds good to me. Good old days, good old music. My contemporary problem would be solved. :-)