Mod
While Korosensei will be teaching quite alot of the core subjects, This is where mods can request to be a teacher of a specific subject. Each will be trained assassins, Each with their own specific set of skills that will be taught to the students. Current Subjects that can be taught by human teachers. Try to bring each subject into something that could be used as an assassin. There are Also Side Subjects that can be taught by the same teachers.
Language Arts:Open
P.E/Gym: Killian & Ana Decker
Chemistry:Open
History:Open
Side Subjects
Art of Seduction and Persuasion/ Language Arts teacher.
Training in Close Quarters Combat and Fire arms/ P.E & gym Teachers.
Art of creating poison and explosive devices / Chemistry Teacher.
Art of Assassination / History teacher. 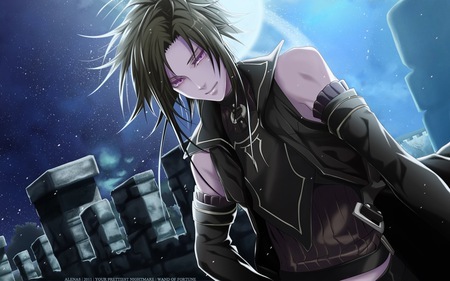 Appearance: Killian has Semi long black hair that he often keeps in a messy but almost clean like appearance. He wears a black sleeveless vest along with long fingerless gloves that go up to his elbows. Often described as a knockout assassin and now Teacher he along with his wife are known to show a lot of skin during their assassin days and nothing about that has changed. The back of his vest has buckles in order to tighten it for when he needs to maneuver. This all black outfit is the one he will wear around the E-class students but will switch into a full suit when visiting the main campus for assemblies and other school meetings.
Full Physical Description: Killian is a quite tall man with an above average looking level of fitness. He is around 6,6ft tall which allows him to look more imposing and have longer reach on opponents. He is built to be an assassin and was always a hit with the ladies because of his really fit and well toned body.
Dressing Style: He often wears his custom made assassin clothing that he used to use when he was in his assassination job. Either that or a nice clothing that lets him blend in with the schools regulation dress code while he sticks to his own style on the E-class campus.

Personality: Killians Personality can be best described as good. He is very caring to those who he is close to and will do anything to help or protect them. Though that being said he is still known for his cold and precise personality that had made him so famous in the assassination business along with government business. When he is focused on either training or killing a target it could almost be described as an assassins personality. Where he is in the perfect state for killing a target. These qualities are what made him a good Assassin, Teacher, and husband to his assassin wife.

Special Skills (Skills for Teachers that make them an assassin.)
◆ Exceptional Skills in Firearms training and Close quarters Combat
◆ Very well versed in almost all forms of hand to hand combat.
◆ Can use pursuasion and intelligence to make a person off
Strongest Subjects
◆ He is an exceptional coach and gym teacher
◆ He can also be a very good language arts teacher if need be.
◆ He is also very strong in math, Which has proven itself in his sniping work.
Weakest Subjects
◆ History on other assassins was not something he found interesting. He has limited knowledge on that.
◆ Chemistry was never one of his strong traits and he avoids mention of it when teaching.

Likes:
◆ Attempting to Shoot the ‘squid’ when ever he can.
◆ Eating italian food.
◆ focused students with a want to learn.
◆ Training the students in their prefered combat style.
◆ The seclusion of the E-class campus
Dislikes:
◆ Blending in with the other teachers when on the main campus.
◆ Being made a fool of. (Generally by Korosensei)
◆ Students that neglect learning and are a general pain.
◆ Being told how to train his students.
◆ The Main campus of the academy.

Home: A home nearby the school that is for the teachers and other faculty to stay in during the school year.
Roommate: His Wife Ana Decker
Level of Teacher: Legendary Assassin
Area Of Teaching Gym Teacher / Boys combat instructor and trainer.
Assassination Preference. Firearms or close in more personal assassination techniques.

Strengths: (Personality Wise.)
◆ Able to adapt to others views
◆ Able to take criticism and insults with ease.
◆ Strong nature and hard to put down.
◆ Caring nature that allows him to connect with students.
◆ Protective nature for his students.
Weaknesses: (Personality Wise.)
◆ Can often be overprotective when it comes to the ones he cares about, which can get him in trouble if he does something bad.
◆ Is not a fan of really cold weather and really hot weather.
◆ Not good with very young children.
◆ Has a very shaky trust with the government and chairmen of the academy.

Mod
Could i make a teacher? Ik im a mod but i wanted to ask before making one XD

Mod
Yeah you can make a teacher. XD sorry for not replying earlier.