Mod
Post all characters that will belong to no tribe here and wait for a mod's approval before roleplaying.

Personality: Querus is secretive and a recluse, avoiding the Tribes. He tends to steal from them at times, taking what he needs to provide for himself. He never harms anyone unless they attack first, but is often viewed with fear. He sticks to the shadows in Trube territory, hoping not to be noticed.
Querus is no ordinary loner. He hopes one day to find someone willing to accept him, into their Tribe or into their heart. He is secretly a romantic and wishes to find the special someone that will see past his shadowy exterior and see the yearning inside him. He is kind to those that are kind to him and has a soft spot for helpless and young others.

History: Querus has been outside the Tribes as far as he can remember. He taught himself how to do everything and never knew his parents.

Family: none that he knows of

Mate/Crush: wishes he had one

Young/Babies: wishes he had some

Powers (if any): doesn't know it yet but his claws are able to rip through anything and he can grow in size if there is dire need

Other (optional-likes, dislikes, etc.)
Querus wants nothing but to be accepted.

Yes, someone in the Tribes he meets, please.

Species: Kelpie:
The Kelpie often appears with its mane dripping with water, standing near a freshwater stream, river or lake.
It resembles a beautiful pony with either a white or grayish black coat.
It can be identified by pieces of seaweed caught and tangled in its long, dripping wet mane.
Passersby would come across this seemingly tame pony and quickly be lured and tempted to mount it.
The riders would then find themselves magically stuck to its back. Once mounted, the deadly pony would dive into the deepest waters and drown the unfortunate passengers.
It was also capable of shape-shifting and assuming a human form to seduce a human lover.
Its shape-shifting powers are said to be contained in its magical bridle.
If captured, this deadly water pony was said to have the strength of up to ten regular horses.
This mythical horse was also known to warn against upcoming storms by wailing and howling 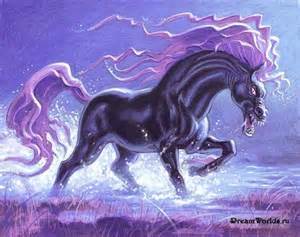 Personality: pure evil. She is out to destroy the tribes. She hates everyone. Especially humans because humans killed her parents. She is protective and hostile.

History: Her parents were killed when she was 6 and she vowed to avenge them and kill all of the humans.

Name: Molkar
Age: 19
Species: Dragon
Rank: loner
Personality: Stubborn and harsh, Molkar has learned to live off of the land. He avoids even the outcasts, due to a "misunderstanding" between them years ago.
Appearance: http://vignette1.wikia.nocookie.net/f...
Mate/crush: None (but open)
Babies: None

History: Among the few remaining of the Ancient bloodline before Lucifer. He Really had no part to play in the underworld, so he decided to go topside. He seeks a mortal Life and Gave his immortality away for a bargaining chip to the mortal realm.