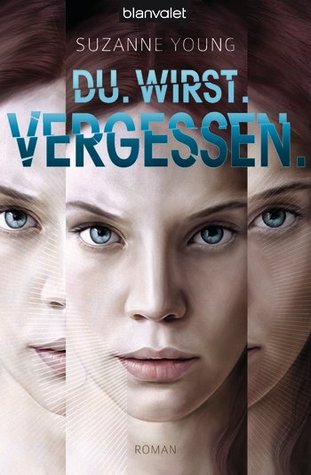 Book synopsis:
In Sloane’s world, true feelings are forbidden, teen suicide is an epidemic, and the only solution is The Program.

Sloane knows better than to cry in front of anyone. With suicide now an international epidemic, one outburst could land her in The Program, the only proven course of treatment. Sloane’s parents have already lost one child; Sloane knows they’ll do anything to keep her alive. She also knows that everyone who’s been through The Program returns as a blank slate. Because their depression is gone—but so are their memories.

Under constant surveillance at home and at school, Sloane puts on a brave face and keeps her feelings buried as deep as she can. The only person Sloane can be herself with is James. He’s promised to keep them both safe and out of treatment, and Sloane knows their love is strong enough to withstand anything. But despite the promises they made to each other, it’s getting harder to hide the truth. They are both growing weaker. Depression is setting in. And The Program is coming for them.

I didn't realize they were turning this into a movie.
https://www.youtube.com/watch?v=b-yDK...
I just started chapter six. This book really gives a new meaning to white coat syndrome!
(view spoiler)[I couldn't imagine having to burn myself just to let out my emotions. (hide spoiler)] I've seen a lot of people complain that the book is too depressing. I hope I'm in the right frame of mind to take this story on.

I'm to chapter 2 or 3 in part 2. I'm enjoying as well. Plan on reading more later tonight.

I started this book on August 9th and it was slow for a while but like in the middle it picked up a bit and I could not put it down. I just finished it today and omg guys you are not going to believe what happens

I am currently ordering the second book!

Awesome Katia!! I'm glad, I need a book that's hard to put down. My last few have been hard to pick back up :p

I know! right? Do you think you will continue the series?

I'm reading with another group and I thought I would comment here, in case anyone is still lurking on this Buddy Read:

After Chapter 6: This was not what I expected ~ there's an epidemic of teenage suicides, so they've developed a Program to deal with the problem. I'm surprised at how little emotion I feel for these upset and depressed teens. Sloane hasn't impressed me at all, but I do like James and his sense of humor.

I found it strange that they kept talking about how Sloane doesn't know how to swim. Foreshadowing?
(hide spoiler)]

Part I: So far this has a been a depressing and predictable story. (view spoiler)[Okay, everyone could see that Miller was going to commit suicide and that James and Sloane would get taken. I'm surprised that it took as long as 121 pages to get it done.

Miller was very sad, and of course, poor James and Sloane would catch the depression. She lost her brother, her best friend, her other good friend and now, her boyfriend. The loneliness and just sheer loss would be very depressing.

I understand that parents have jobs they can't leave, but I would think that teens encountering friends and lovers that don't remember them would be very depressing. I don't think they should allow teenage visitors at all. And maybe they should totally relocate the re-programmed.

Relationships keep us engaged in life and bring happiness. Heart breaks definitely cause depression and angst, but wouldn't the good offset the bad?

I would hate losing the personality of my daughters, but I would do anything to save their lives. Though I can't imagine living with a daughter who was no longer herself, I think I would rather have her with me than lost, if I had a choice.
(hide spoiler)]

Part II - The Program:
This part was faster and more interesting. (view spoiler)[ Red pill makes you more relaxed, willing to talk and marks the memories. Then yellow pill makes you forget the marked memories. Scary.

I thought that Realm might be a Program plant. He seemed to have too much clout and didn't seem as depressed as the others.

Roger creeped me out from the time he was watching Sloane in high school. I'm glad that she might keep a memory thanks to Roger's purple pill, but kissing him was repulsive.

I'm glad that they didn't make Sloane forget Brady. Why would changing their appearance upon leaving The Program matter?

Do Nurse Kell and Dr. Warren really believe in The Program and helping these adolescents?
(hide spoiler)]

Part III - Wish You Weren't Here:
This was the best part by far. It was strange and things happened unbelievably quickly. Also, if your memories were taken (view spoiler)[ would you really be physically involved with a stranger? But the idea that you can't thwart true love was sweet. And the way holding each other felt good and natural and exciting.

I was sad that James wasn't the fun, sweet guy anymore and that he was angry and frustrated. Could that have been true love that you didn't remember manifesting itself?

Realm seemed to genuinely care for Sloane. I was a little annoyed that she would kiss and snuggle with Realm even though she was only interested in being friends.

Her former best friend, Lacey, being the only new friend that she makes seems a bit too farfetched. I could suspend belief for James, after all, she has the picture of James and Brady to bring them together, but Lacey too?! Unless it's not coincidence and her subconscious remembers Lacey too. Hmmm...

It didn't make any sense to me why you would allow normal teenagers to interact with the Returners at that club. Except for a good plot device, that seemed contrary to their other rules.

I liked Realm's sister offering to help Sloane and James. They would need the aid if they were to escape successfully. But will they escape into suicide? Death seems like a steep price to pay for not allowing government intervention in your life. It's not like the government is killing everyone and they are running to save their lives.

The final scene with Realm, Shep, Derek and the new girl was very creepy. It was like an episode of the twilight zone. So was this the scenario if you were a difficult girl fighting re-programming?

James was a difficult boy, it doesn't sound like this was the method they used on him at all.
(hide spoiler)]

The Program (other topics)