I really wish this book would be bought by Hollywood and turned into a romantic comedy. But, since the movie-going market refuses to like gay romances, it seems unlikely. Sigh.

Marshall Thornton is best known to me for the "Boystown" books; his gritty and authentic detective series set in early 1980s Chicago featuring gay ex-cop Nick Nowack. "The Ghost Slept Over" is a departure, and a truly delightful one.

A comic romance about a struggling LA actor who inherits a fortune from a long-ago ex, it is also the sort of small-town farce that reminds me of the Christopher Guest film "Waiting for Guffman" and the classic film by Noel Coward, "Blithe Spirit." There is really nothing in this book that is entirely new for this genre, which is why Marshall's deft comic writing skills are so important. He is a funny writer, and left me chuckling all the way through the narrative. The main characters, Cal and Dewey (the actor and his small-town lawyer) are by no means deep psychological portraits; but we learn more than enough about them to understand who they are, and to feel like they're friends. Indeed, Cal at first seems shallow and opportunistic - but that feeling gradually gives way to something more sympathetic as we learn how he got to where he is.

It's also important that the main characters in the book are all gay and all out in the context of small-town America. Dewey tosses out the line "there are more homophobes than homos" in his town, as he ponders the difficulty presented by dating for gay men in quaint, isolated Marlboro. And yet, he lives his life openly and without any hesitation or shame. He has found happiness away from a big gay population center. He's likable and admirable. As gay as he was, Noel Coward was all about amusing his straight audiences with innuendo and sly asides. None of his plays ever confronted actual gay men living gay lives (yeah, yeah, it was the time, I know, I know). For me, that makes this book important.

So I want everyone who likes this book to make good use of their extensive Hollywood industry connections. Let's see if we can get it made into a film before Matt Bomer gets too old to play Cal, or Russell Tovey too old to play Dewey. Hey, I can always dream.

I agree Ulysses - this was a rollicking fun and snappy read. I've not seen the films you'd mentioned but the dialogue/banter style reminds me of Rick Copp's series - The Actor's Guide To Murder and the zany madcap antics a little like Joe Keenan's books - My Lucky Star.

Overall, I found the characters likeable and having the chapters coming from Cal's and Dewey's perspectives made it all the more interesting. I have to say that I had mounting anxiety throughout the middle section of the book as I wasn't entirely clear as to the ghost's intentions (malevolent or not). As you mentioned, whilst this is supposed to be a small town - I was a little surprised at the number of gay characters popping up within the immediate vicinity (secondary as well as fleeting ones).

The resolution of Cal's haunting is the only part which did not fully satisfy. (view spoiler)[I felt the introduction of the wide-eyed hunky research student a little too convenient and that Mac's love focus shifted far too easily away from the object of his affection/obsession. (hide spoiler)]

I would also advise Marshall to do a further proof read as there are a few spelling errors and more than a couple of missing words, some of which caused an entirely different meaning to the sentence.

That said, I fully agree with your casting choices for this to be made into a rom-com film. A 4 star rating from me. 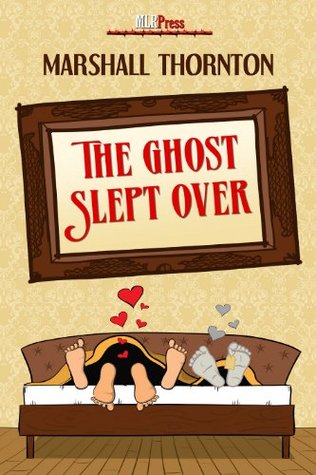