Mod
Fiscal analyst Mike Carlson is good with spreadsheets and baseball stats. He doesn’t believe in fate, true love, or fantasy. But then a fertility goddess whisks him away to another world. A promise has been broken, and if Mike is ever to return to California—and his comfortable if lonely life—he must complete a pilgrimage to the shrines of a death goddess.

A humiliating event convinces Mike to hire a guard to accompany him, and hunky Goran is handy enough with a sword, if a little too liberal with his ale. A man with no home and no family, Goran is deeper than he first appears. As Mike learns more about Goran, his disbelief wavers and his goals become less clear. Contending with feuding gods, the challenges of the journey, and his growing attraction to Goran, Mike faces a puzzle far harder to solve than simple rows of numbers.

I'm a huge fan of Fielding's work, so I pre-ordered this one just as soon as I heard it was being published.

I did enjoy it, but I have to say that it doesn't have the emotional impact of some of her other fantasy stories, like the Ennek trilogy or Brute. The world-building seemed a little weak, and the growing relationship between the protagonists wasn't as carefully explored or defined as much as it was in the other stories I just mentioned (both of which I really did love).

Still, Goran is a fantastic character---very easy to fall for him! And middling Kim Fielding is still well worth reading, so I'll recommend this to those who enjoy gay-themed fantasy.

The cover... well.... The artwork is done by Paul Richmond, who has illustrated a lot of Dreamspinner's titles. Great artist, but while I think many of his covers are truly excellent, others tend toward the "silly" side of things, and I'm afraid this one falls in that category. Heh. Still---like I said, I enjoyed the book enough to recommend it, and will eagerly await the author's next title. 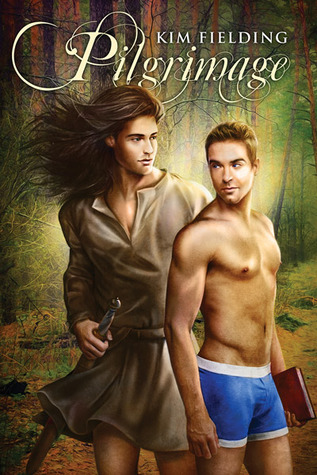 I didn't think the cover was too terrible. I think what I liked was Goran's hair floating in the air. But he looked slimmer than I imagined. I liked this book a lot but to be honest I just like k fielding's style a whole lot. She does the kind of romantic story I love to read. It is never too overwhelmingly sweet like C Cardeno or full of angst like Amy Lane. She strikes the right balance that appeals to me.

Mod
Mercedes wrote: "I didn't think the cover was too terrible. I think what I liked was Goran's hair floating in the air. But he looked slimmer than I imagined...."

The long-haired guy drawn on the cover is certainly attractive, but he doesn't look AT ALL like the Goran I pictured as I was reading. I thought Goran would be less the "pretty boy" type; more stocky and solid and a bit worn about the edges (he was all scarred up, remember)....