With the help of his deaf son, a gay single father in the South looks for love. 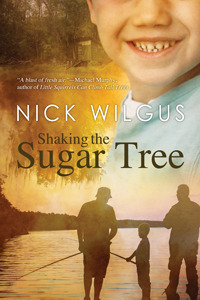 Wise-cracking Wiley Cantrell is loud and roaringly outrageous—and he needs to be to keep his deeply religious neighbors and family in the Deep South at bay. A failed writer on food stamps, Wiley works a minimum wage job and barely manages to keep himself and his deaf son, Noah, more than a stone’s throw away from Dumpster-diving.

Noah was a meth baby and has the birth defects to prove it. He sees how lonely his father is and tries to help him find a boyfriend while Wiley struggles to help Noah have a relationship with his incarcerated mother, who believes the best way to feed a child is with a slingshot. No wonder Noah becomes Wiley’s biggest supporter when Boston nurse Jackson Ledbetter walks past Wiley’s cash register and sets his sugar tree on fire.

Jackson falls like a wet mule wearing concrete boots for Wiley’s sense of humor. And while Wiley represents much of the best of the South, Jackson is hiding a secret that could threaten this new family in the making.

When North meets South, the cultural misunderstandings are many, but so are the laughs, and the tears, but, as they say down in Dixie, it’s all good.

A most enjoyable read. Brilliant! FIVE STARS! But don't take my word for it. You decide.