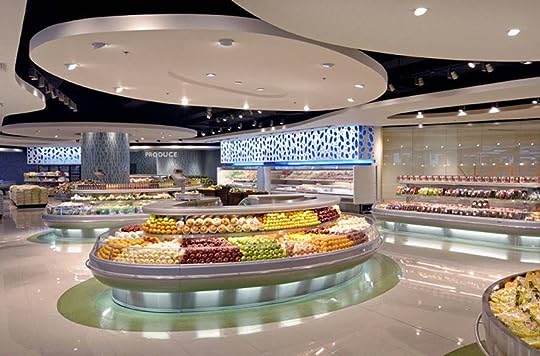 ❝Yes, it's amazing as it looks. This custom built food court has held the hearts of many food lovers as some people have been known to come for this alone. It's slim and precious design, topped with almost every bit of food you could possibly want also covers booths and regular tables for those to sit after staying out in the snow.❞

Rowen sighed as she opened the door to the food court, her bag resting off her shoulder. Her training had ran her to her limits and back, and she loved it. She finally had something to look forward to in the day other than a brief walk around outside. She had felt completely of kilter due to the year she took off from skating. She had gotten back to practicing, rebuilding her maintained strength, but now she was back in the top ranks at competition. Rowen Connell was back.

Eli opened the door to the food court and shoved his hands into his pockets, walking around lazily in his pj pants. His eyes darted around scanning the food choices. He stopped at the fresh fruit and stood. He sighed and grabbed a bright green granny smith apple. He tossed it up as he sat down at a booth alone. He took a large bite, then sat the apple down on a blindingly white napkin. He looked around and pulled out his galaxy note 3 and went through his emails, and focusing on one about the local LGBT support group. He sighed and closed it. He was too tired for this crap. He briefly rubbed his eye and slouched down, looking around, surveying his surroundings.

Contessa shoved her long hair out of her face and glided across the room. Her lips were pressed together harshly, almost making her look mad. She wasn't exactly mad, she just wasn't particularly happy either. Tessa carefully put some stuff on her plate. Prepackaged foods, like chips and a fortune cookie. If Tessa had wanted to eat healthy, she would have made a smoothie at home. This was just her way of getting out of the house. Her parents didn't really care where she was, but when she was at home they tended to watch her every move. Ugh.

Tessa paid for her food then walked to a table some guy was sitting at. "That's my spot." She muttered, annoyed as she sat across from him instead. It wasn't so much her spot, but that was a more valid complaint than 'you're wearing pajamas'. Yeah, that detail hadn't escaped Contessa's notice. She tilted her head and opened a bottle of water. Her own clothes were probably only a little bit dressier, but they were also more expensive. Brand names and such. Why had she decide to sit with him again?

Eli twiddled his thumbs under the table. "Um.." He looked at the seat and began to pick up his apple and his phone, preparing to leave. "Do you want me to move?' he looked around at the basically empty food court. There was an old man in the far right corner mumbling to himself. He looked weirdly at him and faced back to the girl sitting across from him. He casually took a small nibble of his apple, awaiting her response.

Contessa shamelessly watched him fidget. It was cute, that he took her words to heart; She certainly hadn't meant to upset him. Although he didn't look upset, more confused? Tessa supposed that was reasonable. After all, there was maybe two other people in the food court. Plenty of other tables to sit at. She shrugged, giving that sort of I-don't-care attitude. Because it was true. He could move or he could stay. It didn't really make much difference. "Sure, why don't you go home and come back when you're old enough to dress and stick up for yourself." Tessa's words were harsh, but the tone of her voice was kind of bland. She put the lid back on the water bottle without ever taking a sip and popped open the small bag of plain flavored chips. Tessa never seemed to have an appetite(sp), but she went through the motions anyways.

Eli's eyes grew dark. "Ya know, maybe I would if one of my fathers wasn't dead and the other constantly trying to kill himself, and maybe I would if I could afford the shrinks there. Maybe I would but I won't because I just like fucking with bitches like you. " He slammed his apple on the table. And crossed his arms. It was acting up again. Not now. Not ever. His disorder never stopped for anything. As much as he tried. The horrible chemical compound of dysphoria and bipolar did horrible things to his brain. It drove him crazier and crazier through every mood swing. He just couldn't stand it. He grabbed his stuff and began to walk away. He just couldn't take the moods. He needed to lock himself away for a while, at least until he got a bit better.

Woah. Contessa's eyes widened at his outburst. Was that what it was like, when she flipped out for no apparent reason? "Shrinks don't help." Tessa called out, kind of loudly. She tapped her index and middle finger against the table impatiently. "They tell you to move on, that you can't keep living in the past. Well guess fucking what? I can't go anywhere without seeing something that reminds me of my brother." Tessa's voice cracked, showing emotion for the first time so far. "And everytime I go to text him, it hits me again. But you know what? I still get up and get dressed because he was all for normal, and average, and trying again when things didn't work the first time."

"I never said I stopped functioning. Yeah. They really don't help. I know. But they keep telling me to come back because I'm scared of what I'll do if I don't. And if I miss it, I can pretty much say goodbye to my dreams. But it wouldn't be so bad if my dreams actually went away though." He turned to face her. "So I could stop dreaming of the faces that raped and stabbed my girlfriend and I." Tears flowed freely from his eyes. "So I wouldn't have anymore disorders. So I wouldn't be haunted-" he stopped. Why would he tell this to a complete stranger in a fucking food court? He didn't understand how his brain worked. But somehow, he started to feel an inkling of relief to say it. To someone other than the bald headed freak that he saw weekly.

Contessa stared at Eli, confused by his sudden shift into crying mode. Her lips pressed together in disapproval, and her eyes narrowed but Tessa didn't comment on his drastic mood swing. She kept tapping her fingers against the table top and sighed to herself. Yeah, she'd gotten the crazy person apparently. While her own short speech had been a bit random and self-centered, his speech was much more dramatic. It just bothered her, because it was like he wanted pity or something instead of just dealing with it. Granted, she wasn't the best at handling things in her own life, but she didn't go around telling strangers she was raped either. Yeah, Tessa highly doubted that was actually true. Not because he was a guy, but just the way he spoke.

"Do you need a napkin?" Tessa asked since there were no tissues. She kept her voice blank, though if you looked at her closely, there were plenty of tells for how she was feeling. She didn't get why Eli was just standing there, an almost relieved expression on his face. Contessa was much more a fan of the hit-and-run method. You mention whatever, then make a quick exit leaving the other person with questions. Much more fun, no?

Eli wiped his own face. "I'm good." he felt suddenly awkward, studying eyes prying him open. He didn't like it. He shifted weight and walked slowly over to the trashcan, throwing away his barely eaten apple. He wasn't hungry anymore. He sniffled and turned on his heel, he pushed his hands in his pockets and pushed open the door with his shoulder, leaving the food court.

Eli walked back in, shivering and shaking snow off his grey jacket. "Too... fucking..... cold......" He sat down by the door and pushed his hair out of his face. He then got up, trying to avoid any eye contact. He went to the counter and bought a hot chocolate, then sat down at a small table in the corner. He fidgeted nervously.

Before Contessa could say anything else to Eli--though admittedly she hadn't known what to say--he was tossing the bright green apple into the trash and leaving. Which, yeah, hadn't she just mentioned that dramatic exits were cool? She'd never considered the idea of a dramatic entrance. He managed to walk back inside and capture her attention by not doing much of anything. Tessa tilted her head, and picked up her water and chips. Shoving the fortune cookie into her pocket, she stood up and wandered towards him. "Hey." She said, not sitting down next to him, but sort of just standing nearby.

He jumped slightly at the sound of her voice. Small drops of hot chocolate flew onto his hands and on the table. He kind of chuckled a little, but almost unnoticeably. "Sorry" he didn't know if he had spilled some on her or not. "hi." He took a small sip of the hot drink and sat it back down. He looked at Tessa wondering why she had chosen to come back. He thought that like she didn't like him. He just got that vibe. It's not like he didn't like her, he just felt kinda awkward.

Ugh. Tessa scrunched up her nose at his less than happy expression and sat down near him anyways. Clearly, Eli always walked around with a dorky look on his face that made him seem confused. "So," She said staring at him in an almost thoughtful but mostly agressive manner. "You want to explain about your freak-out?" Yeah, Contessa wasn't going to take no for an answer. People had reasons for everything, weather they knew it or not. You didn't go around crying and cussing if you were happy. You also didn't not eat unless you were having either a horrible day, were too lazy to make food, or were anorexic. Considering the fact that he'd bought an apple? Tessa doubted it was the last two choices.

"Um it's just stupid things going on up there" he said pointing to his head. "It's not unusual for things like this to happen" He sighed. His brain could be so stupid sometimes and he hated it with an extreme passion.