Argh! Baxter’s resolution was to go 24 hours without having a meltdown, but it wasn’t looking good.

He’d broken the same resolution the day earlier. First he awoke way too early in a crappy motel in a town too small to have a Starbucks. Then he’d spent endless hours on I-5, the Freeway That Never Ends. It had begun to rain almost the minute he crossed into Oregon, and it wasn’t a proper sort of rain, just heavy enough to get people to stop talking about drought. No, this was a drizzly-misty-sprinkly thing that came and went, so he was constantly having to adjust his windshield wipers. And besides, rain in July was unnatural! Oregon was too green. It hurt his eyes. And he couldn’t get anything decent on the radio, which left him with nothing to do but wonder why there were adult bookstores at every freeway exit up here. Traffic crawled through Portland and pretty much came to a complete stop on the bridge to Washington, which he thought was bad until he hit the outskirts of Seattle. Apparently the Emerald City was one big traffic jam. God, he thought, CalTrans ought to come up north and teach these people how to build a real freeway. By the time he’d checked into the nice hotel he couldn’t really afford, he was a wreck.

But today was a new day, and he woke up resolved to do better. He smiled at the hotel desk clerk, who was pretty cute; and of course finding coffee was no problem at all. He’d settled into a comfy window seat, his Venti Americano close at hand, and he’d pulled out his phone to search for a place to rent.

But now here it was, an hour later, and he hadn’t found a single place that didn’t either exceed his budget or involve a soul-crushing commute.

Instead of breaking down into embarrassing sobs, he texted his BFF. This was big mistake.

Marcus had the fastest thumbs in the West and he replied right away. What’s wrong baby boy?

I hate it here.

No, he wouldn’t adjust. And he didn’t have any time, dammit. He needed to find a place to live before the hotel maxed out his credit card. God, what had he been thinking, taking a job offer on a whim like this? Why didn’t you talk me out of this?? he demanded.

You need a change. And because bad breakup is bad.

No, bad breakup is devastating, demoralizing, and depressing. Baxter glared at his phone.

After a moment or two, Marcus texted him again. Be brave little soldier. We love you.

Baxter couldn’t help a small grin. His friends were far away, but they definitely cared about him. Love u 2. Gotta go.

Maybe, he decided, it would help if he walked around a little and got a feel for his new home. At least it wasn’t raining today, and if he pretended he was on vacation his mood might lift.

So he trudged up and down hills, taking in the touristy sights. He watched the ferries come and go, saw fish fly around Pike Place Market, took the monorail to Seattle Center, and snapped a selfie in front of the Space Needle. By the time he walked back to his hotel, he had a plan. Or at least a plan for a plan, which was a step in the right direction. He went up to his room long enough to grab a pen and pad of paper, then went out again in search of more caffeine.

He didn’t get far before he discovered a large glass-and-steel building that looked like it might be a condo for aliens. “What the hell is that?”

He must have said it out loud, because a bearded dude in a kilt and motorcycle jacket paused long enough to answer him. “Library.”

Wow. They didn’t have libraries like this back in SoCal. Or maybe they did—he hadn’t been in one since junior high. But this would be an excellent place to put his plan for a plan into action. Besides, he was curious to see the inside.

As it turned out, the interior didn’t resemble any library he’d ever seen. It had vast spaces with sloping glass walls. There were bright carpets, bright chairs, and bright escalators. The inside, he decided, looked like the aliens’ airport.

He found a quiet table near several rows of bookshelves, fished out his pen and paper, and put on his thinking cap. He began with a to-do list:

1. Find apartment
2. Let new boss know I made it to town
3. Figure out where new office is
4. Find True Love and live happily ever after

He stared at the list for a moment before scratching out item four. The last thing he needed right now was a relationship.

Okay, then. Item one. Random online searching wasn’t doing the job. What he needed was a second list, this one a list of places to look. He didn’t have to find a perfect home right away. Just something convenient, affordable, and not too appalling. If absolutely pressed, he’d even be willing to have a roommate. He only had to stay in this place until he found something better, and anyway he was probably going to be spending most of his waking hours at the new job.

Instead of making a new list, he took out his phone and typed in the URL for Craigslist. But before he could even change the location from LA to Seattle—which was a somewhat traumatic thing to do—he heard a weird watery sound. Sloshing. He glanced outside, but the sun was shining. Maybe the building had bad plumbing.

He intended to click on Housing, but his finger rebelled and he ended up at Personals instead. “No,” he muttered to himself. He’d crossed that item off his list. Besides, Craigslist might be good for finding apartments or cars or unloading used furniture, but he doubted it was a good place to find True Love.

You could find a lot of other interesting things, as it turned out. There were a lot of guys with very… specific tastes. And what exactly did all those acronyms mean? Baxter hadn’t been in the dating scene for a long time, and even back in the day he’d been too hesitant to dabble much. God, was he going to have to deal with all this crap? Clubs. Bars. Grindr? He shuddered.

Baxter looked up from his phone.

The first things he saw were the tops of knee-high leather boots and a pair of long, strong legs clad in buff-colored pants almost tight enough to qualify as leggings. Baxter’s eyes tracked upward. He almost choked when he got to the crotch—those pants left nothing to the imagination. Only this guy had a hell of a lot more than nothing.

With effort, Baxter continued raising his gaze. The guy wore a wide belt of striped fabric and a puffy white shirt with an open V neck. Nice chest—muscular but not steroidy. Dark chest hair. A brown leather vest that looked spotted with water stains.

“Pardon me,” the man repeated. He had a slight accent that Baxter couldn’t place. Although the man was smiling politely, his chest moved up and down rapidly, as if he was slightly out of breath. He shot a quick glance over his shoulder.

“I was hoping you would do me a great favor.”

The man’s smile increased a notch or two, but he stole another quick look behind him. “Might I have your paper and pen, please?”

Baxter was suspicious and bemused. But since they were just the cheapy pen and pad from the hotel, he shrugged and held them out. “Sure. Here you go.”

Oh. When the man really turned on the smile, he was toe-curlingly gorgeous. “Thank you, sir,” he said as he took the items. And then he executed a deep and graceful bow. “I am in your debt. But for now, I can give you only this small token of my gratitude.”

He reached inside his vest and pulled something out. He set it on the table with a clink. “Now if you’ll pardon me, I must flee.” With a jaunty little salute, he ran off. He disappeared between two tall rows of shelves.

Baxter looked down at what the man had given him. It was a golden coin. When Baxter picked it up, it was heavier than he expected. The front pictured a smug-looking guy with a ponytail, and it was stamped with the date, 1798. The back had a coat of arms and writing in a language Baxter couldn’t read.

He was still peering at the coin when he heard raised voices. A crowd of men came thundering up the escalator. They were dressed very much like the guy who’d taken his paper and pen. Some of them wore tricorn hats. But Baxter’s mild interest in their headgear disappeared when he realized what they were holding in their hands: swords.

Although he tried very hard to make himself invisible, there was nowhere to hide. Baxter watched as the men ran to and fro, swords waving, shouting to each other at the top of their lungs. Maybe, he thought, if I stay very still they won’t notice me.

But then one of the men—a tall, thin guy with a crooked nose—glanced Baxter’s way. An unlucky beam of sunlight came through the glass and hit the coin he still held, making it gleam.

The man pointed the tip of his blade directly at Baxter. “This way, boys!” he roared. He and his friends stampeded forward.

Baxter yelped, grabbed his phone, and sprinted off between the shelves.

And we're off to a running start! Literally! I loved this. I can't wait to read part 2 (and I'm starting to get some ideas for my bit...).

And it's hilarious that you set it at the Seattle Central branch. (For those who don't know--that's where the conference is.)

What a great start! I can't wait to see how things go from here!

A pic of Baster's "Condo for Aliens" 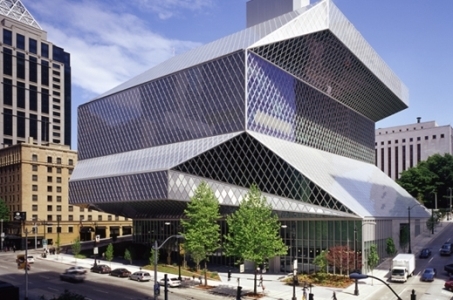 Jeffrey wrote: "And we're off to a running start! Literally! I loved this. I can't wait to read part 2 (and I'm starting to get some ideas for my bit...)."

Thanks! I had so much fun with this prompt. And I'm so looking forward to seeing what you guys do next. I may have been cackling evilly as I wrote. ;-)

And it's hilarious that you set it at the Seattle Central branch. (For those who don't know--that's where the conference is.)

Thank you! I just could not resist setting it there. :-)

Great start, Kim. I couldn't have done it, and I'm still trying very hard to rein in my weirder impulses. Because I could take this out there to a point where no one would know what to do with it. I'm a mental patient like that. :D

Andrea wrote: "Great start, Kim. I couldn't have done it, and I'm still trying very hard to rein in my weirder impulses. Because I could take this out there to a point where no one would know what to do with it. ..."