Mod
Talk about how awesome it was and if you want a second one. XD 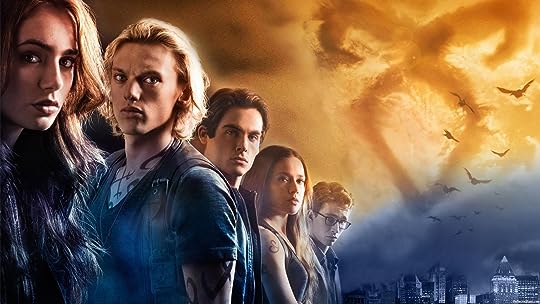 Jace: *sitting cross legged, stroking his chin* That felt like a documentary on Medieval weapons, except without an audio track. Poorly placed lines, my fabulous hair. If it didn't have me, I'd forget I'd watched this after thirty minutes.

Clary: That kick was worth at least 90 damage!

Clary: No way, it could totally have been more effective. Valentine was back in seconds after I kicked him. Maybe if I declared this was Sparta... Crack portals, crack tension.

Jace: The budget probably broke on costumes before they could buy you a sense of humour... but now I know why you weren't hired for it.

Alec: *staring horrified before cuffing the person beside him* Magnus, stop drooling over me, it's embarrassing.

Magnus: Mmmmmm... M'Alec. *stretches* Why don't you ever wear shirts like that?

Alec: THAT was barely anything at all! *mumbles to himself self-consciously* (The girls were showing less skin).

Isabelle: They chose my favourite boots and made demons fall into my whip. Shadowhunters need that kind of choreography. Demons know when to fall into our weapons, we know when to hit them. Our lives would be so much easier.

Jace: Not to mention boring. We spend all of this time complaining about mundane movies and their unrealistic fighting sequences--now, we don't have room to complain because we're emotionally wounded by something that was made for us.

Isabelle: Just because you were part of a Disney movie, Jace, doesn't mean you have to hate it for all its worth.
Simon, what do you call this, again? Trolling.

Jace: If you were any blonder, Alec, I swear.

Mod
I laughed way too loud when I read that. XD

So, I watched the movie for the first time. Unfortunately, my brain was numb because it was 3:00 am and I probably shouldn't have been watching a movie I'd anticipated for months in advance when I couldn't take anything seriously.

Mod
I loved the movie. Not all of it was correct(If you compare it to the book), but it came out way better than Percy Jackson and the Olympians: The Lightning Thief.

I had to watch the Sea of Monsters to truly appreciate the Mortal Instruments movie. After that, it was a good movie. Sure, some cheese was injected--such as the techno music while they killed vampires (I loved that part! Someone obviously had a sense of humour--and/or didn't want people to stray too much on the mass slaughter they were currently seeing) and the obvious garden scene.

I found, as a final opinion that the movie makers/actors/etc weren't trying too hard but they weren't trying too hard. It didn't feel extremely fake but neither were the reactions and facial expressions always timed. You could tell that there was a script (I guess it doesn't help when you know the lines from the book and when they were said and how I imagined they were said. Jaime Campbell could have got more comfortable with Jace).

It being correct wasn't my concern. I like artistic straying as long as they have a reason for it. What I found during the first time watching the movie is that it felt like a documentary about the book. The second time around, I watched it with other people who hadn't read it and it was more interesting, more real (I spent less time noticing that Alec's eye behind his socket moved when he was supposed to be asleep).

If there is a sequel, I can imagine that it would be better, less like a documentary, more comfort put in the acting (gingerly came to mind). I am a little afraid that they'll continue omitting Magnus but then again, one of the biggest complaints from people who saw the movie, liked it but hadn't read the book was that they wanted no relationship between Magnus and Alec because it made them uncomfortable.

To me, they're adorable and once you get to know Magnus, it takes no time to understand why he's worth being at Alec's side but if Magnus is not important because Clary can do anything and everything with runes, then he's not going to be in the scene very much--probably not even side mentioned as being around. They did their out-most to take away Magnus' part in the movie. The location of the vampires, the portal, the memories. They can't develop characters if the characters can't even look at each other in the eyes (that goes for everyone).

I wish for the next movie, that Clary and Simon aren't afraid to be the bubbly teenagers they are, watching anime and making references that all the serious Shadowhunters don't get. Even for New York, I felt alienated from society (which fit Clary in the books) but hopefully Jace is right, the world will change around them. In the second book you learn that the story doesn't revolve around Clary and Jace, they're just key competitors for the main role.