Mod
Demons chose before Earth was even created to spread chaos through the world. They are evil, but not thoroughly. They have consciences too.

Tempters focus their days on tempting humans to do evil.

Warriors fight Angels who try to do good and spread general chaos.

Darks are the rest of the Demons, who simply spread chaos whenever they want. 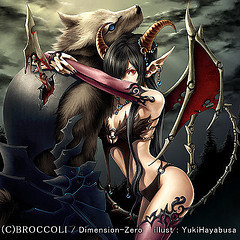 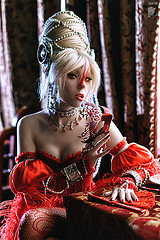 Personality: selfish, possessive, short-tempered, & will prey on her own to spite hell's decision

Background: Was a favored female demon, in heirloom for princes of darkness (most powerful demon, 'devil' to her is a slang word). Was cast to earth for her possessiveness & temper to teach humility by more powerful & influential older demons. Keeping out of hell is denial to a crazy club for her, earth is 'sooo laaaame'(valley girl voice).

Special: Turn to smoke & pass thru where air can. In human form she uses her charisma & charm to enthrall mortals/humans (intelligence & intuition determines severity of enthrallment, works like a soulgaze, like 'Dresden File' books the eyes are windows to soul, a few seconds of direct eye contact initiates intense feelings/peek into a humans soul, they're desires, etc)

Hand weapon: secretes a 2 ft. spear/knife edge - works like spear or large knife, & can move independently to other limbs - The magical spectrum quickly reveals the weapon is an extension of her tail in demon form, like scorpion tail. Unless looking at magical spectrum she can appear human after changing into demon form.

** Must revert to human form in sunlight **

Misdeed: Just way too naughty, tried to play hard to get with the prince & other powerful players... 'devil wears red & Prada'

Other: She's friendly to tempters in a mutually beneficial way to keep tabs on potential 'toys'. She knows watchers to keep up to date with any possible enemies. Absolutely loves turning angels into fallen because it tastes like a fine sherry or aged wine.