The Mercer Corporation might rule the world through the control of pheromones, but nothing, and no one, is going to stand in Maggie’s way. Especially Quentin Mercer.

Ever since the development of M-chips, which tap into human pheromones, M-Corp has become the new superpower. Why trust your heart when all you have to do is get within a two-metre radius of someone to record a compatibility rating? Ratings range from the rare ‘perfect match’ to the dreaded ‘negative’ and everything in between.

Three years ago Maggie’s father mysteriously rated as a ‘neg’ and was taken away from them. For the last two years, eighteen-year-old Maggie has had only one goal: to uncover the truth and bring him home. But even though she’s discovered the government’s secret underground prison network and the fact that negs aren’t going to rehab farms (not even close), she’s still no closer to finding her father. Her last hope is Quentin Mercer, her classmate at the elite Kingly Academy — and the heir to the Mercer Corporation.

By tricking Quentin into believing he’s a ‘neg,’ Maggie quickly gains access to all things M-Corp. But Quentin isn’t the person she thought he was… And while she can easily betray her morals in the quest to save her father, can she betray her heart?

Mod
What do you guys think?

Omg, I can't wait for Shirvingtons version of a dystopian novel!!!!! This sounds pretty awesome - and the plot idea is fresh and new!!!!

Now only one thought remains: how will Maggie compare to Violet? And is this guy more of a Linc or more of a Phoenix? I can't help but compare in wonder....

Mod
Ooooh me too! AND I KNOW RIGHT??? HER CREATING WORLDS IS JUST AMAZING AND I CAN'T WAIT FOR HER DYSTOPIAN WORLD!!!
:D

Well, the main character has the best name in the world, so how can I not read this book when it comes out? :P

I am so excited to read it! it sounds amazing!!!

Ikr, can u believe that is coming in just 3 months!!!

So have you seen the Disruption cover? It's so different from the VE covers, but unique in its own way, especially with the beige color scheme... A strange choice in color?

I've seen the cover. it is so interesting. I love the look of it. have you read the first few pages? they sound really good

Mod
LOVE THE COVER!!!! Only just saw it today though, so now I'm going to post it. :D

Hmm, maybe they'll put up the official cover officially soon, because it looks like a photo of the book, not just the cover.

Mod
And she's got a new publisher by the looks of things.
No more Hachette, Harper Collins instead.

Mmm. I'll look online at the cover. On the Goodreads iPhone app so I can't see pictures.

Mod
oh, well can't you see the cover at the start of the thread?

I made myself a promise.
I would do whatever it took. I’d see this through to the end.
Make it right.

I’d been tracking him for most of the day. I had other things to do, but it had been over a month since I’d monitored his weekend activity. And sloppiness wasn’t an option. Not now.

We were in DC, waiting in Dupont Circle Metro. He’d opted for a rare driver-free day, making it easier than usual to tail him, and I wondered why. Perhaps because he’d spent the morning touring Georgetown University and wanted to appear normal – not that everyone didn’t recognise him and point. I suspected it had more to do with not wanting to explain to Daddy why he’d explored a university other than Princeton. His family hailed from a long line of Princeton graduates and I knew it was assumed he would attend, like his brothers, after graduation. He probably already had a wing named after him.

Hidden beneath my faded blue baseball cap, I fidgeted with the edge of my sweater as I studied his movements carefully, with calculated interest. Carrying out my plans wasn’t going to keep me up at night. Not after all the things I’d already done.

He never noticed me anyway. Not once. Not even when the large lady with the foghorn voice asked me if she was on the right platform for Chinatown. It wasn’t because I was particularly stealthy. It was just that, standing there in his waist-hugging suit pants and crisp white shirt, he had no need to see me.

A commotion erupted at the other end of the platform. All eyes turned to watch as five M-Corp security guards stormed down the escalators, closing in on a short, balding man wearing wire glasses. I had barely registered the man before he was blocked from my view.

My attention returned to him. He had only just turned eighteen, but the tailored pants and shirt made him look older. I heard one of the M-Corp guards demand the man with the glasses activate his Phera-tech. The command was followed by a number of feeble attempts at refusal. Of course, the balding man knew it was futile. You could already hear the whispers of the other commuters.

It wasn’t that I was immune to the situation. I’d just seen it a whole lot worse. A whole lot more personal.

He on the other hand…

My interest heightened as I watched his reaction. Oddly, he observed the situation with a kind of reluctant curiosity, even taking steps towards the scene others were quickly distancing themselves from. His eyes widened as the guards restrained the man, fixing plastic ties to his wrists. One guard plugged in a portable linkup system to the man’s M-Band so that they could hack into his personal data while another recited the Negative Removal Act.

My view to the man cleared briefly. He was visibly shaking. He attempted to drop to his knees, though the guards held him up. He begged them to let him go, crying out in broken sobs for a chance to make right whatever it was he’d done – or was going to do – wrong.

No one made a move to help him, even though I heard one or two heart-rate monitors sound an alert. People’s hearts weren’t racing for him; it was fear for themselves that caused the spikes.

I knew my expression gave away nothing but detachment. He, on the other hand, watching everything with a look of revulsion, and I felt a sick sense of justification that he should see this now. Nothing could better prepare him.

The spotlights that lined the platform began to pulse red, indicating a train on approach. I glanced one more time at him and noticed he was moving towards the guards. I straightened, suddenly intrigued. Was he going to step in? Surely not.

I never found out.

The sounds of struggle intensified and I turned my attention back to the balding man in time to see him break free of the guards and leap straight off the platform.

The man – the neg – collided instantly with the oncoming train.

it sounds so different and interesting.

That sounds so cool!

and of course, it has a classic Jess Shirvington cliffhanger end of chapter. :D

Ik right? It's kinda strange but I'm sure Jess will elaborate!! Can't believe this book is out in less than 2 months! Gahhh, still reread parts of the VE chapters constantly and I've practically memorized Empower, I just can't let that series go. It's weird to see a completely different world yet hear Jess' familiar writing style

Ahh that was awesome. I'd already read it but it was so good a second day.

I know! every time I read it the more I can't wait for it to come out

Mod
I AM ACTUALLY SO EXCITED!!!! She is so awesome at explaining new worlds and this dystopian novel wil be just amazing and incredible.
@Sofia, same! I have re-read Empower and all my favourite parts, and while I was in London the other month, I kept going around looking at apartments and construction sites wondering if Violet was/had been there. :D
AND I FOUND THE CROSS BUILDING TOO!

oh my grigori Renée! that is awesome

Mod
I may have cried.... and scared the local Londonions.
BUT IT WAS SO AWESOME ANYWAY!

AND I LOVE THE NEW COVER!!!

haha I would have done the same thing. maybe scream more than cry haha

Mod
yeah, there was some of that too. XD

Mod
I am actually so excited to see a dystopian world by Jess. It's gonna be amazing because her writing and ideas of creating these worlds and the mythology and accuracy behind her stories is just fantastic!
So well thought through, she's so clever.
GO JESSICA SHIRVINGTON!

I know I love the worlds she creates you can almost visit them in your mind. GO JESS!!!

Mod
I KNOW!!!! It just pulls you in!
I wonder if we'll get any other sneak peaks? :D

Mod
Me too! Ooh and I want to learn more about Maggie! :D

Mod
THEY ARE MAKING THE BOOK TRAILER!!!! 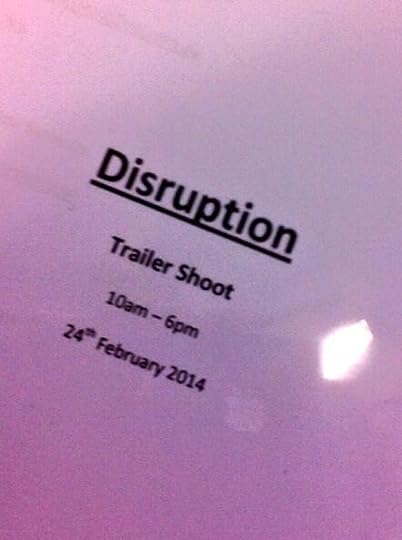 Mod
ME EITHER!!! OMG THEY ARE FILMING THE TRAILER TOMORROW!!!! WHOOOOOOO!!!!!!

I wish I was there watching the film it :)

Here's some pictures from behind the scenes of the trailer.
They look badass!!
Here's our Maggie: 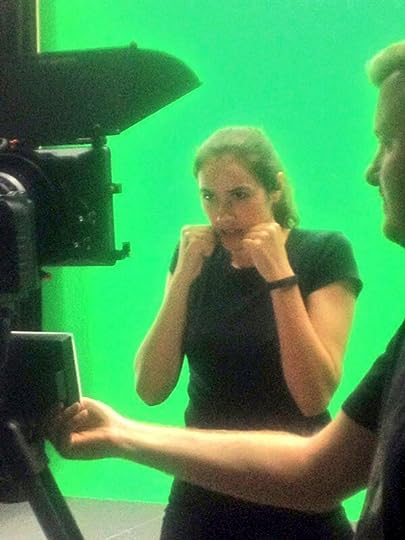 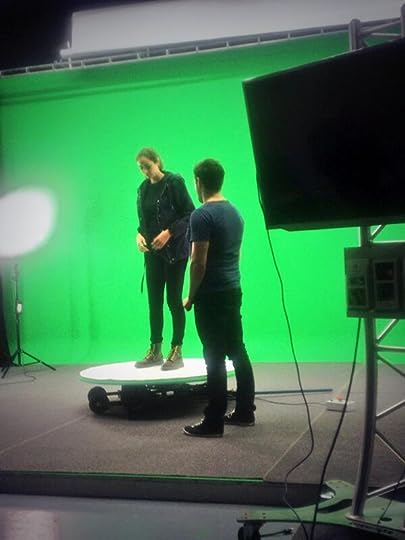 I have started my countdown.

is the date of the publication only for Australia?if yes I should change the country settings at amazon again :p

Mod
I don't know, I got the first publication date, which is the Australian and New Zealand release date, but I'm not sure about about other countries.
BUT OMG SO SOON!!! :D :D :D

I know! Good thing we dont have to wait too long:D

Yea I think it's only the Australia and NZ release, so yea, I gotta change my kindle settings too ;P

Mod
Yeah, but you never know! It might be worldwide actually... I shall look into it. :D