Mod
A Fire Swap Force Skylander with a Dark form. He uses the Rocket ability. 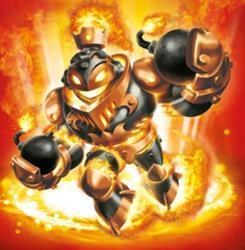 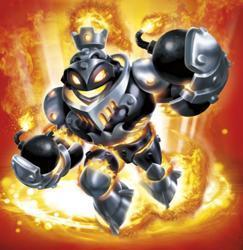 As a young furnace knight, Blast Zone was part of the Skylands Bomb Squad, specializing in the safe disarming and removal of troll bombs. But it was not long before the trolls got tired of Blast Zone constantly thwarting their evil plans, so they decided to go after the furnace knight himself. Late one night, an army of trolls snuck into Blast Zone’s village and threw 100 bombs down his chimney. Acting quickly, Blast Zone swallowed each bomb and then belched a jet of fire back at the invaders – sending them fleeing with their boots on fire. The tale of the attack eventually reached the ear of Master Eon, who knew the brave furnace knight had all the makings of a Skylander.

While on a special mission, a team of Skylanders discovered a secret lair where Kaos was experimenting with a new discovery -- Petrified Darkness -- which he initially intended to use to stage a coup against Skylands. In their fight to stop Kaos, the lair exploded, releasing a cloud of pure Darkness. The Skylanders knew they couldn't let it escape, so they absorbed this energy, transforming them into dark versions of themselves. Fortunately, Spyro learned to tame that darkness within him long ago. So with his help, these Skylanders now have also learned to control it -- combining its power with their own to fight Kaos and the forces of evil.

Bomb Toss-Hurl a bomb at enemies

Flame Breath-Breath fire and turn to create a fire wall

Sticky Bomb-Charge a bomb to make it stick to enemies

Bomb Party-Throw two bombs at once

Fuel for the Fire-Dash for an infinite amount of time

Hot Feet-Fire is left behind when dashing

Heat Wave-Blast a fireball at the end of a dash

Too Hot to Handle-Fiery aura does more damage

Mod
Woah!! Different moves for each half!

Mod
Otherwise how would it work when you switch halves

Mod
I thought it would just include the different features of the character.