Mod
An Undead Skylander with a Legendary form. He uses the Teleport ability. 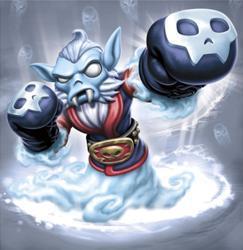 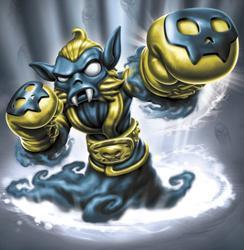 From high up in the gloomy Batcrypt Mountains, Night Shift was a full-fledged baron and heir to a great fortune. But one day, he decided to leave it all behind to pursue his dream as a prizefighter. It wasn’t long before Night Shift became the undefeated phantom-weight champion of Skylands, famous for his massive uppercut and for having once bitten an opponent in the ring. Unfortunately, a rule change made teleportation illegal and Night Shift was forced to give up his belt, officially ending his career as a boxer. Crestfallen over being disqualified from a sport he loved so dearly, his spirits picked up when he was sought out by Master Eon, who told him that his skill as a fighter could be put to great use as a member of the Skylanders.

For centuries, Skylanders have competed in gladiator-style events inside epic arenas of sport, where only the greatest of combatants become immortalized as magical, golden statues that stand watch as guardians. These are the Legendary Skylanders. Whenever the world is in peril, special Portal Masters can bring these statues to life and summon the Legendary Skylanders to defend Skylands against any evil that threatens it.

One-Two Punch-Throw a punch at enemies

Vampire's Bite-Bite down on enemies and drain their health

Don't Move, Just Stick!-Charge the punch attack to do an uppercut

Gentlemanly-Attacks do more damage when at full health

Infectious Smile-Biting does more damage over time to its targets.

Batty Coach-A bat will revive you when defeated

Grand Entrance-Enemies are slowed after teleporting

Close to Doom-Vortex does more damage

Round 2-Some health is restored when revived

Luck of the Underbat-You can be revived twice

Catchphrase: Roll with the Punches!