Create a vampire or a daylighter here

Appearance: (pictures are aloud, but a description is still required)

Place of residence now: New York but travels to london every few years. 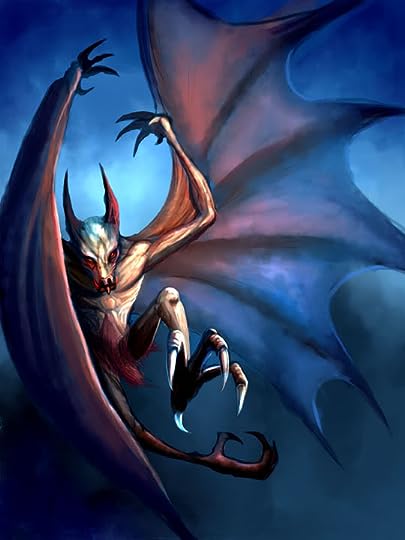 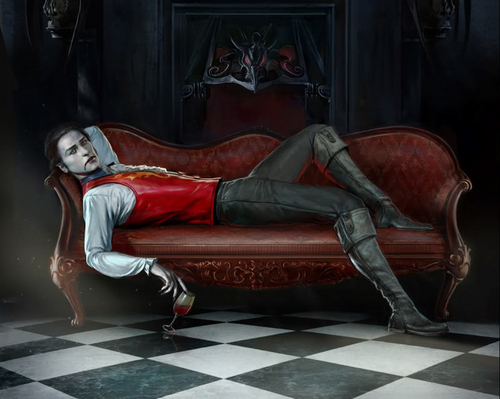 barnibus is fairly tall and muscled. His skin is a ghostly pale like any vampires from his time. He has electric blue eyes that turn red when he is angered or very angrey. He has vampire fangs like any vampire, barnibus has slightly pionted ears and deadly and sharp tallon like finger nails. His hair is a milky brown that is brushed back in the style of the 1700s

Style: he where's dress shirts with a older styled velvet vests with black Jean/sold pants like horse riders wear and male leather boots from the 1600s.

Personality: barnibus is a perfectionist. He must do things his way. Never disobey him or he'll make you pay. He loves to mess with shadowhunters. He is a big hit with the lady's.

Likes/Strengths:
Likes: warm blood
Red wine
Doing able to do things without being yelled at by shadowhunters.
riding horses

Strengths: inhuman strength,speed,sight and hearing
He is a master at wielding pistols and hand guns
His ability to fight do to his past of being a soldier in the 1700's

Dislikes/Weaknesses:
Dislikes:people that don't know there place
When something is our of order
Cold blood
White wine

History: barnibis was born into a wealthy family, he jioned the army as a american soldier. He never really had to work a day in his life. He lived in a huge mansion which he Still owns. As he turned 20 he fell in love with a widowed women a year younger than him. Both fell in love with each other but his true love had a secret she was a vampire. The young widow Turned him into a vampire, devastated Barnibus killed her and lived his life in solitude for 300 years watching the ones he loved die while he stayed young forever. He still lives out his life in the shadows and protection of night.

Other: likes to ride horses

Accepted and could you just ad where he lives now. In London or New York? That would be it

Age: Looks around 20 but turned during the WWII

Appearance: Looks more humanish than others. He has pale vampire skin and jet-black hair. His eyes turn red when hungry but their usually blue. Heโs really tall and slim.
http://s440.photobucket.com/user/kjho...

Style: Black shirts and pants, loves to blend in with the night.

Personality: Will is a caring soul. After killing people for so long he wants to help them, instead. He's kind and compassionate. He has taught himself restraint around blood. You'll rarely see him lose control, but he is stubborn.

History: Compared to his brethren, he has more control than most. Will worked as a nurse in the army before turning into a vampire, but because he was a daylighter he continued to help humans despite what he had become. He does not like being a vampire and is shunned by most vampires. The only vampire he stays in close contact with is his sister, Paige. Who he turned into a vampire in order to save her life.

Age: Looks 19 but was turned around WWII

Style: She wears short skirts and t-shirts. Not to mention short dress. All black.

Personality: Paige has learned to use her body to get whatever wants. Because of this she has a lot of male minions. Sheโs flirty and very outspoken

Dislikes/Weaknesses:
~Being told what to do
~Falling in love

History: She had a rough childhood being abused by her father, but Will had always been there to protect her. But when Will left to join the war, the beatings resumed and with no one there to stop them , she was nearly beat to death and left for dead, but Will came back just in time and turned her in a daylighter like him.

Does Raphael have a brother? It was mentioned in the first book but I'm not sure.

I don't know, it was never made clear. But he did have a family, I think.

Cool. Then a brother sounds good. I want to see what he's like!

Ananya~Shadowhunter in training wrote: "Does Raphael have a brother? It was mentioned in the first book but I'm not sure."

Oh my god!That's so cool. I never knew that. No names mentioned though.

Powers: daylighter, being young she is still discovering her abilities.

Appearance: Suri stands at 4'7, long curly milk chocolate hair flowing down to her waist, framing her round child like face. She has clear blue eyes, with golden flecks that appear at night. A slim button noes, and full lush lips. http://data3.whicdn.com/images/415329...

Style: Suri loves to wear dresses, frill, lace, even ones that flair out at the bottom. She loves her white fur coat the most, because it is a token of her past.

Personality: She is sweet on the outside, but inside sleeps a dark creature. Cross her and she wont be so kind. She uses her innocent appearance as a weapon to feed.

Likes/Strengths: Doing whatever she wants without asking. She has been very spoiled in the first four years of her existence as a vampire.

History: Suri was the oldest in her family. Before she was turned, she remembered happiness and love. But the day everything went wrong, she remembers everything turning grey and ugly. Her family, wasn't her family anymore. There was yelling and fighting, and then running. Endless running. She awoke in a dark ally, dry blood everywhere, and since then she's been on her own.

Other: She loves shopping.

I absolutely love your character!

Luka? Because I'm not technically done with Niko.

Whatever you've done with Niko is awesome even though it's not done. I'd never even think of making such a detailed character!

I personally love the GIFs best. xD And yes, I try to be as detailed as possible. But...I'm afraid this isn't the best I've done, since I'm in a rush. :(

But Vampires don't have Telekinesis.

Oh I didn't see that. Star fix that and your fine

I thought Maureen was turned when taking a picture with Simon? When she had a crush on him?

Yeah...and Elizabeth, she's an original character. You don't have to make her profile again.

[Dislikes]
| Losing | Niko has a huge pride and he does not favor having it damaged when he loses in battle, ..."

From where did you get the template? It's really detailed.

AT LEAST 10 sentences in total for history!

Yeah. That's why it seemed familiar. She even made it for the City of Ember RP. I got an invite for Posies but too busy with other RPs so I'm not joining any new groups now.


So I delete her?

You don't have to but it's not necessary you create her because her personality and apperance remains the same as the books.

History: His momory was whiped by some retarted thing gone wrong only knows the past 5 years that have gone by since them

Other: Fav blood type is b-

I'm so sorry! I didn't know! Of course you are accepted!

No problem! I only became a MOD a couple of days ago, so I couldn't of accepted him until recently! :)

Appearance:
hair long, blue eyes, Bright smile.
Style:
Kinda girly
Personality:
Sweet, kind, can't live with out a guitar or her best friend.
Likes/Strengths:
Guitar, is okay with blood. Can go a bit longer without blood
Dislikes/Weaknesses:
Too dependent on her best friend.

History:
Lives in a big mansion, but is an only child and her parents travel a lot. Was turned into a vampire by Raphael.
Relationship Status:
Her best friend is a boy and they kinda like each other.
Other
her best friend's name is Wyatt Rain

Appearance- http://www.myhdwallpapers.org/anime-v... Nick's eyes are very light gray and her skin is pale. Her hair is long and black.

Style- She usually wears black sleeveless dresses or jeans with a black tank top. Her hair is almost never up, instead she wears it loose.

Personality- Nick can be very flirty but stays away from mundanes, she finds it hard to control herself around them. She has started writing books to fill her time but most don't get published. She has a horrible temper and can snap at any second.
Likes/strengths- Darkness. Blood. Wine(she drinks wine to try to be as normal as possible). Writing.

Dislikes/weaknesses- The sun. Feeling like she isn't normal. Bad temper.

History- Her parents were killed in a car crash but her adoptive parents were very fond of her. Even after she moved out, they kept very close until her 21st birthday when she suddenly disappeared and was declared dead a year later. She couldn't bring herself to see her adoptive parents because she didn't know if she could control herself for long enough to explain everything.

Relationship- Single but flirts with various boys of various species.

I just realized it really does. I didn't even notice that 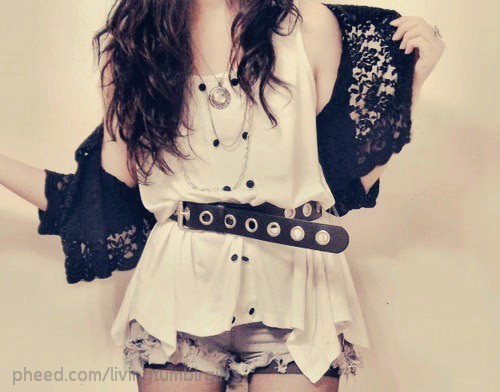 Personality:
She has been around long enough to know that she shouldn't get to know people who can die, so she knows warlocks and vampires. She misses her old life, but has mostly gotten over it. 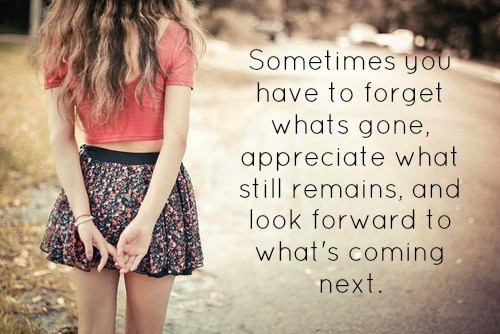 Likes/Strength
night, blood
Dislikes/Weaknesses:
Can't eat normal food, hates death of others.
History:
She was turned on a farm by a rogue vampire attaching everyone. She returned to her home and her husband tried to kill her. So she ran away and never used her last name again, She had a daughter name Violet after she ran away and kept her, Violet was also a vampire. Elizabeth brought Violet to London to raise her, Violet chose to be a pre-teen, so she look like she's 12.
Relationship Status:
Single
Other:
Violet went to La and hasn't seen her in awhile.

Powers: Regular vampire, but with distant warlock heritage, so traits sometimes manifest in form of random chaotic magic. Can grow bat like wings.

Likes/Strengths: Her weirdness, bursts of magic, ability to grow bat like wings.