So should we go ahead and do charries?

Thanks! Yours is, too!

Oh, and which person for my charrie interests you the most? Just wondering.

Personality: The Undertaker has his bad side and his good side.

The first thing you will be able to sense about the Undertaker is that he is the most evil creature you will ever imagine. He is not afraid to do the vilest thing he could ever do. Just by looking at his appearance, you will be able to see the evil. When his presence is near, you will sense it and feel it. He is a person's worst nightmare. Not to mention, he can go into a terrible, uncontrollable rage when angered.

"Turn out the lights. I much prefer the darkness."

Another thing you will instantly sense about the Undertaker is that he is dark. He carrys himself in a rather eerie way like a zombie. He loves to dwell in darkness, and his mind and soul are as dark as his black hair and as dead as his red eyes.

"All the worms, the maggots, and the larvae feast on your rotting corpse."

The Undertaker is indeed twisted, his dead mind sick as well as dark. He loves to sleep in a coffin, but a bed will do.

The Undertaker is very animalistic, having his black hair long and many times in his face. The animal language is clearly a language he knows, for he often growls and grunts and snarls.

"My tomb is not marked. It has no name. But you will know that it's mine when I tell you that my symbol is on it."

The Undertaker is very mysterious. It is very difficult to tell what runs through his mind.

"I welcome you to my domain."

Despite his dark side, the Undertaker has some warmth hidden deep in his cold heart. He will show this warmth if he likes you or has some amount of care for you. If you're lucky, you may even see his rare smile. Once you discover his good side, you will end up loving him to death.

"I know your wound stings, but I shall be gentle."

Something that's rather rare to see from the Undertaker is gentleness. If he handles you gently and takes care of you when you're hurt, you have a reason to be relieved.

Another rare thing is when the Undertaker turns loving. That will happen when he finds himself really liking you or loving you.

"When you're alone, you won't really be. I will be standing beside you."

Once the Undertaker cares for you, he is loyal to the very end. He will not back down without a fight for your life and will die for you.

"I am touched by your love. I will return the favor and give you my heart."

The Undertaker becomes affectionate when he is loving to anyone he considers dear to him. He responds very well to gentleness and love and will return it in some way. He will take you into his arms and give you the most wonderful hugs and kisses you'd ever dream. Especially when it's coming from the Undertaker, it's even more wonderful and amazing.

If you’re sad or hurt or frightened in any way, the Undertaker is there. He is quick to comfort and is willing to be the shoulder to cry on. He can change from being the nightmare to the one comforting you from a nightmare. He is a creature that will immediately take you into his arms the moment he hears a pitiful, heart-wrenching sob. He is one who can hold you and comfort you forever. He never tires of it.

"Once you place your hands upon my own, your fate is sealed."

Once he cares for you, the Undertaker is fiercely protective. He is like a guard, watching over you and protecting you. There are moments when he can get a little too overprotective, but that is not too often. When the Undertaker cares for you enough to protect you, you could never be in safer hands.

"The only way hell can freeze over is if it's Hell, Michigan."

The Undertaker has a fun side and a great sense of humor. Once you get to know him well, he becomes a total clown. He loves playing pranks on people, and he gets a charge out of their reactions. Not to mention, he has some clumsiness and can add some extra comic relief with that. He also likes it when people laugh at him and make fun of him.

Powers: The Undertaker has many powers, which shall be roleplayed.

Fears: Yes, the Undertaker does have fears. Here are a few of them.

*Any special, magical weapon that is able to kill him.
*The death of any loved ones.
*Religious crosses. They do not harm him. He’s just scared to death of them. He does, however, like non-religious, crucifix crosses and other evil-looking crosses.

*Blood.
*Falling in love with the right girl.
*Children. He has a soft spot for them.
*The colors black, purple, and blue.
*Holidays.
*Murdering and torturing.
*Anything horror.
*Tombstones.
*Graveyards.
*Moonlight.
*Fog and mist.
*Coffins.
*Burying people.
*Pizza.
*Blueberries.
*Ice cream.
*Any and all desserts.
*Candy.
*Nature.
*The night.
*Operas and singing, for he has the voice of a god. He is a professional opera singer.
*Wrestling. He is a professional wrestler.
*Acting. He is a famous actor as well.
*Anything that has to do with humor and playing pranks on people.
*Revenge.
*Pouring out his love and affection to the ones dear to him.
*Acting insane and psychotic.
*Laughing maniacally.

*Anyone who angers him exceedingly.
*Anyone who hurts and kills children.
*Anyone he loves dying.
*Anyone who tries to hurt or kill his loved ones.
*When people see him afraid. But if you’re a close friend, then he won’t care so much.

Talents: These are a few.

*Singing.
*Acting.
*Wrestling.
*Using his supernatural powers.
*Playing pranks on people.
*Playing the organ and piano.
*Rolling his eyes completely back into his head.
*Speaking in foreign languages.

*Taking walks through the cemetery, woods, pastures, nature trails, etc.
*Running. As a supernatural being, he is fast for his size and weight.
*Flying.
*Taking souls.

Appearance: The Undertaker has long, wavy, black hair, which drops down to his waist, and clawed hands, and all of his teeth are sharp and pointy. He has huge, black, gargoyle wings and devilish, black horns that he can reveal or conceal at will. His eyes are fiery red, one of the most horribly frightening things about him. He has an incredibly huge body. He is six feet and ten inches tall, a giant of a monster. His shoulders are broad, his arms huge and muscular, his chest wide and broad, and his stomach large and round (he eats a lot), showing how incredibly strong he is. He is so strong that he can literally break metal. The Undertaker is truly your worst nightmare. 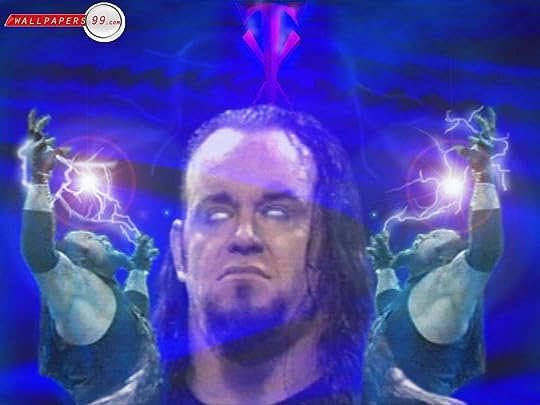 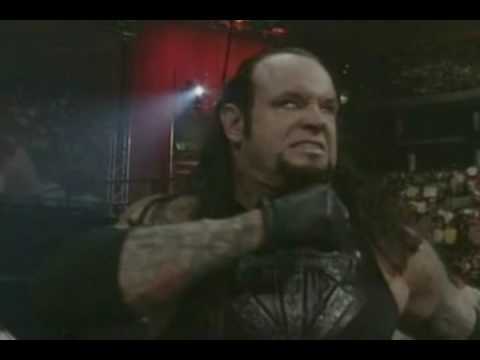 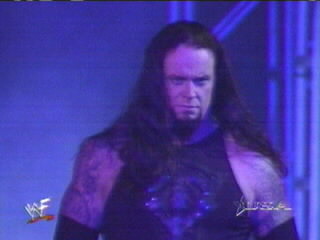 Other: The Undertaker can speak Latin and Egyptian fluently, along with communicating with animals. He is also not living. He is dead. He has no pulse, but strangely, he has a heartbeat. He lives in a haunted mansion with an eerie graveyard surrounding it.