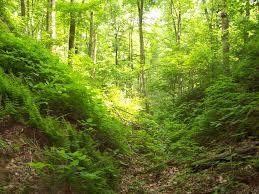 Luke had been in his wolf form more than he had been in his human form whenever he came into the woods, which was a lot now. His wolf part of him had been gaining more control over Luke's body, and his predatory instinct was in full swing now. He could smell the delicious hide of a deer close by. When he crept slowly up to the creature, he was disappointed in how scrawny it was. Still, he was hungry, and he would eat just about anything that he could find. In a flash, he had charged at the deer and had sunk his teeth into its furry leg. He had broken the leg of the crying animal with his strong jaw and began to eat it ravenously. Once the creature was dead, he began to eat its meat more slowly and savor the taste.

Luke's furry ears perked up when he smelled another wolf near by. His muzzle was still covered by the blood and meat of the deer. He licked his muzzle clean with his tongue and looked around the woods to seek out who was close by. There were other werewolves in this forest, that much he knew, but the ones he met always seemed to be the territorial and violent seeking type.

Luke's head swiveled over to see Rocky coming very close to him. He didn't know any better, so he instantly defensive about his meal and growled at her. He met her gaze head on now, but the looks in her eyes seemed to confuse him because they weren't menacing- they looked, curious. As quickly as he began to growl, he stopped.

Ulrich had been sitting in the forest under the shade of a tree near by. Ulrich's back was pressed against the trunk of the closest one to him, and his legs were resting on the thick and long tree branch he sat upon. With his arms folded across his chest, and his head dipped forward, he slept soundly. He had always found sanctuary in nature on account of his parents' obsession with it, and their obsession luckily only translated to a liking for Ulrich. On normal days, he would be dressed as if he was going to work, but today was one of his more simpler dress attire days. A white accompanied by a black over shirt and grey pants with shoes.

reply | flag *
message 7: by [deleted user] (last edited Oct 02, 2013 12:31PM) (new)
Oct 02, 2013 08:47AM
Eden was walking though the forest, she had ditched her brother and went for a walk. She was walking and found a nice shady part of the forest, she took a seat on the ground under the tree and fixed her hat so that it hid her ears, she didn't like to show them. She didn't notice a young man above her in the tree.

Ulrich woke up some time later and stretched out his arms, then he swung his legs over the side of the branch he was sitting on, and he jumped off and landed on the ground. As soon as he landed, he noticed a girl sitting under the tree that he had been on top of. A small smile came to his lips at this pleasant surprise. "Hello there," he said. He noticed her hat that she wore concealed part of her face, so he wasn't really able to see her completely.

"I'm sorry if I'm intruding or anything like that. I didn't see you until just now," Ulrich explained then. Now that he could see her better since she moved her hat aside, but not off of her head, he could see her better. She was indeed very beautiful, and her eyes had a sparkle to them when she gave him a smile.

Ulrich returned her warm smile with his own dazzling and friendly white smile. He took her hand with his own hand and shook it. "Ulrich," he said. She must have not been from town, because most girls he realized wouldn't be the first to extend a hand to shake. She was polite and beautiful, he was definitely happy to have met her.

reply | flag *
message 13: by [deleted user] (new)
Oct 02, 2013 03:56PM
Eden smile didnt leave her face "that's a unique name" she liked his name. He seemed different from most of the other boys, she couldn't tell if he was supernatural or not and decided not to ask him, it might make him uncomfortable. She put her thumbs in her belt loops like she normally did when she talked to people.

"So is your's, Eden," Ulrich pointed out then he leaned casually back into the tree. Something about her features seemed unusual compared to how most girls looked. Not that he minded it, she looked different to him, and he was fond of different. "Though if it means anything to you, I think I like your name better than mine," he said.

reply | flag *
message 15: by [deleted user] (new)
Oct 02, 2013 04:03PM
Eden shrugged "I think my name is okay, its not cool like your name, Ulrich, i have never heard it till today" she smiled "Most people call me Ed, or E" she leaned on the tree about three feet away facing him with her smile on her face

"I've never heard of your name before either," Ulrich said with a shrug. He ran a hand through his short hair then he met looked around at the forest then back at Eden. "What brings you to the forest if you don't mind me asking?" he asked her.

reply | flag *
message 17: by [deleted user] (new)
Oct 04, 2013 04:16PM
Eden smiled and shrugged "I got bored so I went for a walk" she smiled "what about you" she put her hands in her front pockets, She didnt really want to go home so she ditched her bother and went for a walk instead

"I enjoy nature, and I was bored too, so here I am," Ulrich said then he gestured down to himself and let his hands fall back to his side. He began to wonder if she too knew about supernaturals like he did. Though, he had a feeling that if he brought it up, and she didn't know about them, she would think he was crazy.

reply | flag *
message 19: by [deleted user] (new)
Oct 04, 2013 07:58PM
Eden smiled at him, he was a vary nice and handsome guy. she was happy to have company "I ditched my brother, that's why im really here, i was bored so i just ditched him" he shrugged and looked around

"I don't have any family besides my parents, so I'd consider you to be fortunate to have a sibling," Ulrich said. He wondered why he'd never met Eden before seeing as he often came to the forest.

"I haven't seen my parents in a long time, so I wouldn't know what it's like to be around them every day. Still, I like to know that I'm doing something good when I meet new people like you," Ulrich said with a smile at her.

(( Sure. It was your post I believe. I can do doubles and roleplay with you both at the same time. ))

reply | flag *
message 24: by [deleted user] (new)
Oct 05, 2013 11:27AM
She whimpered a little at his growl, moving to the ground, not wanting to fight. She looked up at the wolf with big eyes, wondering if he was going to hurt her. He then stopped growling, but she didn't move because she was still weary of the wolf protecting his meal.

Luke looked back down at his meal, then up at Rocky. He looked down then he lowered down his head and tore a piece of the meat off of the bone of the animal. While he carried it in his mouth, he walked it over to her slowly, then when he was close enough to where their muzzles were inches apart, Luke set the food down in front of her.

Ulrich shook his head. "No, it's just me," he said realizing that if he said he wanted to have a sibling, Eden would correct him on how it was t that great to have one.

"Are you a mind reader, Eden?" Ulrich asked her with a raised eyebrow then he had a smile on his lips again. He nodded his head, and said "Yeah,I'm hungry too."

reply | flag *
message 32: by [deleted user] (new)
Oct 05, 2013 08:29PM
Eden giggled "nope sadly" she stood straight and took his hand "let's go then" she walked through the forest looking around as she did and hand him next to her

Ulrich was surprised at first that she willingly took his hand. In most normal scenarios, well not in ones where couples meet in the woods, the guy would offer to take the girl's hand and she would either accept or decline. His positive energy remained as they walked through the forest.

reply | flag *
message 34: by [deleted user] (new)
Oct 05, 2013 08:35PM
Eden stopped in the middle of an open spot and looked around "and I'm lost again" she sighed not even knowing that she was holding his hand, she looked at him and smiled a little bit

"That's something i always try to avoid," Ulrich said. "I always walk into the forest, not having a plan as to where I'm going, because when I do get lost with a plan, I'll get worried. When I don't have a loan, I have no worries," he said with a smile at her. His hand that held he's gave it a squeeze.

"Then let's do it," Ulrich said and found himself wondering why he thought she looked even more attractive when she had blush in her cheeks.

reply | flag *
message 38: by [deleted user] (new)
Oct 05, 2013 08:50PM
Eden smiled and walked with him the way she pointed, they were headed further into the forest. Eden looked around then at him and smiled a little bit, blushing as well.

Ulrich walked alongside Eden until they had just crossed over the boundaries of the forest into the entrance of the town. It still amazed Ulrich to this day how close the forest was to civilzation, and it relieved him to know that man hadn't taken down this last bit of nature by where he lived.

Luke looked down at the food then up at her. He could tell that she was put off by him growling earlier, so it was understandable of her to not trust him completely. He lowered himself down until he was laying on his stomach and his chin was on the ground between his two furry front legs. He looked up at her, waiting for her to hopefully trust him now. He was surprisingly curious about who she was.

Ulrich chuckled at her apology. "You don't to have apologize for that kind of thing, Eden. I'm fine with walking with you for longer, because I also get to talk to you more this way," he said.

(( Is there a town thread that we can switch to by chance? ))

reply | flag *
message 50: by [deleted user] (new)
Oct 14, 2013 02:09PM
Rocky looked at him before sniffing the meat. She licked it once before eating it. After she was finished she looked back at him as her tail thumped the ground.