30 views
Members' Writing > How my near-death experience inspired me to write.

Before I go about promoting what I wrote, I just want to give a brief introduction.

When I was a kid growing up in Jersey, I once went to a lake with a group of boys. There was a rope for you to swing off of to dive into the water. One boy after another was leaping off, but being a timid child, I held back.

Some of the boys were teasing and insisting I do it too. The teenagers watching us were somewhere else, so I felt completely alone. I could barely swim and I was easily frightened. Yet, I took the rope they handed me.

I remember swinging once and not jumping. Someone yelled something that really hurt me and finally, I decided to just drop rather than jump.

When I hit the water, I panicked. It felt like water was rushing up my nose and down my throat, my head spun, and I was absolutely certain I had forgotten how to swim. I was so terrified, I apparently blacked out.

Next thing I remember, I was coughing with all the boys around me. Some of them were crying. The teenager watching us said (and I'll always remember this), "Holy s***, kid. You were gone. You were f***ing gone."

When he had pulled my body out of the water, he checked my breathing and my pulse. All the boys swore up and down that I didn't have a pulse. The teenager beat on my chest for just a few seconds before I regained consciousness. They said I must've been dead for at least fifteen seconds.

I wasn't sure if that was true (even to this day), but I do remember seeing something. I don't know if I saw this vision when my heart stopped or after I was rescued and only THINK I envisioned this. But during those few seconds, I didn't see any sort of bright light or tunnel.

I saw myself. I saw myself live thousands of different lives, no two exactly alike. And one of them was the worst life possible. I felt every sort of pain that there is to experience in the world in that tiny second.

The teenager and the boys got me home (I don't even remember if we walked or drove). I was in a complete state of shock the entire time. When I was finally home, I cried the entire day. I thought my parents knew what happened and I was in trouble. And I thought those thousand lives I saw were real.

That vision of me living the most pathetic life imaginable always stuck with me. I think I lose more details of it every year. But I would stay up late every night, just thinking about what could be the worst thing to happen to someone when they finally die?

I finally decided on an answer one night. And for many nights after, I obsessed over it. It grew and grew and grew, and I wanted to talk about it with others but didn't know how.

Eventually, a story flourished out of it. This story and certain characters began to evolve for years. They each earned names, seemingly out of nowhere. Sometimes I'd forget or push it aside, but it would always come back eventually.

I never had the time or the desire to write, so I just buried it away. I never jotted down any notes or scribbled any sketches.

Until almost two years ago, as I stood at my computer at work, I was compelled to write down the first line that had been swimming in my mind for days and days. I pulled up Word and wrote down only one sentence:

"In five minutes, Celadore Louvar is going to die a slow, lonely death at the age of fifteen."

Then, I couldn't stop writing. Whenever my co-workers weren't looking, I'd write. I sneaked time whenever my boss wasn't nearby, I devoted my fifteen-minute breaks to it, I almost never had a proper lunch break. I had been constructing this story for so long, I was able to write chapters without referring to any notes.

Eventually, I was caught, and my boss had to pull me aside and tell me to stop writing at work or she'd fire me.

So I finished the rest of it at home in less than a month. I've put it in the back burner since then until just last week, after editing and drawing like a madman, I released the ebook on Amazon. 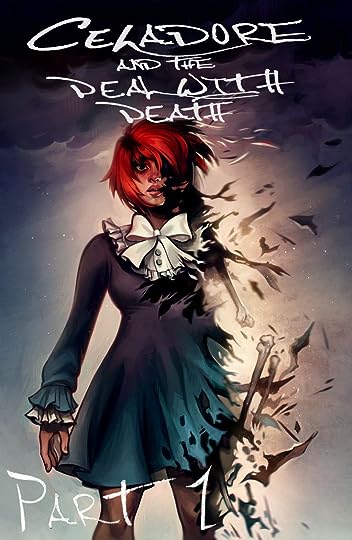 The book came out rather long, and it was only the first in a five-book series. I decided to cut the first book into five parts. They each come out to approx. 80 pages. It's only $0.99.

The link is here.

It's a young adult fantasy novel that someone once described as "Alice in Wonderland meets H.P. Lovecraft." I think it's a pretty astute comparison.

I know this was a long read, but if you burdened through it, I want to thank you for taking the time to know me a little. If you do decide to give the book a try, I hope it both entertains and inspires you. And one day, I hope to eventually be able to write what I felt.

Wow. That's a really inspiring story and I can't wait to see how your book turned out. In the meantime, my best wishes to you.

I haven't read your book but your experience is pretty interesting

I read the sample and OMG! I'm so gonna buy the book! Please keep writing and keep me posted on new stories!