Mod
Also know as water horses, the capaill uisce are extremely fast, beautiful, and just amazing. Just don't forget that they are deadly. They WILL kill you if they get the chance. Remember this when making your water horse. Also, if your horse has a rider, make sure its okay with the person if it is not your own charries horse. Also, all water horses MUST live at the stable.


Name:
Age:
Coat:
Appearance:
Weight:
Height:
Personality:
Backstory:
Rider?: (does not have to have one) 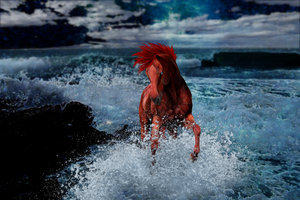 Weight: 365 Lbs
Height: 18 hands
Personality: Darcy is difficult and loves to run. He isn't too bad, though. He's less likely to eat you than a lot of the other horses. Maybe maim you though. Maimings a possibility. He loves to be by the water and race in the Scorpio Races.
Backstory: Was captured and brought to the stables. Has been in the races for three years now. This will be his fourth.
Rider?: Dylan Carver 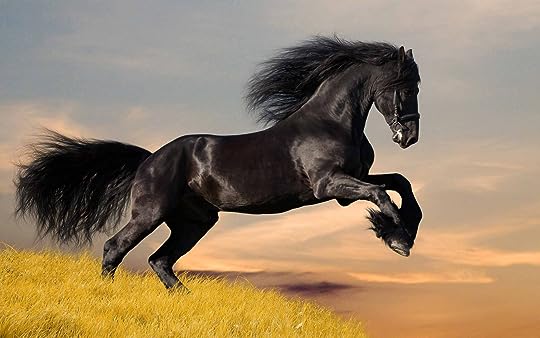 Weight: 800 pounds
Height: 19 hands
Personality: Thunder is as untamed, as powerful and wild, as the sea itself. The magic of the sea is strong around him. He's ridden many times in the races and won many times. But he's killed before. He lets no one ride him but Gaea, who he loves. He's lightning fast, perhaps the fastest on the island, and very intelligent. He loves to run and he loves the sea. He hates the iron, etc, that most riders drape on their water horses in an attempt to control them, and so Gaea rides him bareback, though that is the most dangerous way to ride a capall uisce.
Backstory: [see Gaea Envy's backstory]
Rider: Gaea Envy