This doesn't actually have to be a creature; it can be a human from the future or something. But here is where you can create a science fiction character (ex: alien, futuristic human, mutated butterfly... etc) to roleplay with.

FROM NOW ON, YOU CAN CLAIM A CHARACTER WITHOUT GETTING APPROVED BY A MODERATOR

Thanks, thought it would be fun :)

Name: Rettaya Fxchs (<--look forward to the future, people, this is the kind of last name you'll get) 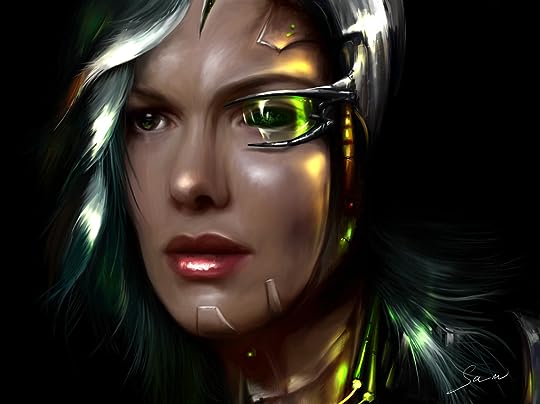 Background: She is descended from the original mutated human beings that dominated the earth 1,000 years ago. She has superhuman abilities, like the ability to change her skin color and run like lightning. She is out to seek vengence on the creatures who killed her brother.

Dunno what Defiance is

Then, probably yes. I just created the most cliched scifi premise ever, so it's probably similar to a lot of other scifi stuff

yeah. im gonna stick with X-men just to be safe. i love mutants! and hugh jackman!

Name: Willow Hughes
Gender: F
Age: 16
Species: Mutated human; angel/demon
Appearance: http://t3.gstatic.com/images?q=tbn:AN...
Personality: quiet and social, beautifully dangerous in her own way
Background: was taken from her parents and sent to an institute where scientists did experiments on her. one experiment went wrong and made her sprout angel wings and get a demon's attitude. Shes lived on her own forever and is looking for her perfect half (another angel that is a guy)

Ooo... Are you gonna make that "perfect half"? Approved

Name: Adam Sparks
Gender: M
Age: 17
Species: mutated human; angel/demon
Personality: quiet and social. dangerous in his own way. patient, honest, trustworthy, forgiving
Appearance: http://mobile.freewallpaper4.me/320x4...
Background: a science experiment gone wrong. Adam has lived on his own ever since and has been looking for his perfect other half (Willow) for years

Mod
(She is an originate character please don't steal the idea)

Name: Alizarin Bell
Gender: Female
species: Human
Personality: TBT
Family: She has no memory of them
Background: She was enlisted in a science experiment where researchers implanted a dragon essence into her body. She has been suppressing the creature’s presence.
Pets: She has a small red bird, name Jake, which sleeps in her hood of her different hoodies-she always have one on.

im not plannin on stealin. i aint no thief ^_^
im gonna stick wit my X-Men!! Anarchy!

Mod
I want one now that you say it, and my reason for not wanting anyone to use the idea is because she's a character in my book and I want to write her personalty out by rp with her first.

Ohhh... I was wondering why you always put that there.

dont you want some? i want some and Iesha wants some. dont you? 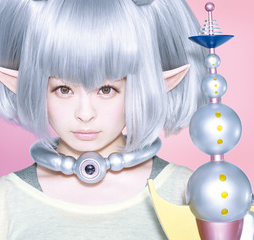 Very petite and has silvery/periwinkle hair, styled in the way of her people. she has a single antenna in the middle of her head. her eyes are a metallic copper color, although not really noticeable from afar. she's a couple inches below average human height, standing only at 5'2". Her clothing seems a bit out of place compared to the attire that the inhabitants of this planet wears. Appearance wise, just looking at her she seems to look and have the structure of any other human 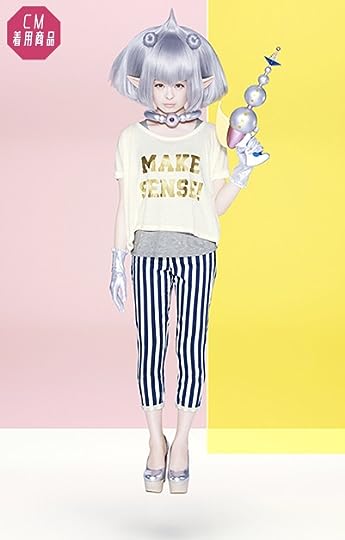 Background: InBee is from a not so distant planet, just three stars away. She was born into what we would call a political family, her being the 6th child of her large family. She was trained from a young age in combat and weaponry, sealing her fate on later joining the Exoplanetary Discovery Organization (the E.D.O), which was basically invading and taking over other planets. Her home planet already owned two other plants.

Other/Extra: InBee can shoot beams from her eyes willingly, and has telepathy.
Although she tries hard to hide it, loves fashion. Especially from different "cultures"

Mod
Name: Tubithya "Tubby" Strying
Gender: F
Family: abandoned her when she was four
Appearance: short, has strawberry blonde hair with golden highlights, her eyes are a turquoise color but they turn neons green when she is mad and uses her powers
Species: a quarter of an alien species, human, some weird ice people, and earth people
Powers: Control ice, earth, has the ability to live in extremely cold conditions, and has the ability of telepathy.

Nice... you guys can join in the dystopian world thread anytime you want.

Name: Granger Meld
Species: half robot\ half human
Appearance: buff brunette with blue eyes taller but still very cute
Background: He was made in a factory but is the only robot human left

Name: Kai Eagle
Species: His father was human, but his mother was a fairy, and his grandmother was a mermaid, while five of his earlier descendants were house-elves from Harry Potter.
Appearance: pale, dark eyes, medium height, usually looks indifferent.
Background: His parents were taken by the police when he was very young.
Powers: Can breathe underwater, and he can technically do other things, but only when he panics.
Age: 14
Flaws: Because of his house-elf ancestry, he's too obedient (like Ella Enchanted). Also, he can't use his left arm because of the attack that took his parents. Finally, he lives in fear of hurting someone with his abilities.
Personality: He has a good heart, but at first he can appear insane or cruel because of living on his own.

Are we allowed to make two in a row?

Name: Annalisa Descard
Age: 14
Species: Vampire
Appearance: Dark curly hair, violet eyes.
Background: She hates the stigma attached to her species and would do anything for anyone who asks. That's also her flaw.
Flaws: See above. Also, she has 'fits' where she stares into space and doesn't respond.
Personality: Sarcastic, snippy.

Yup... But you need to add personality for both your charries, and then I'll approve both of them :)

Name: Aedric Loveitt
Species: Time traveler from the past
Appearance: 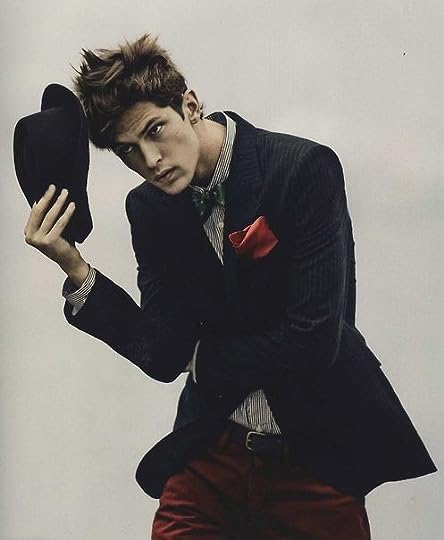 Personality: Aediric is a gentleman. He's polite and respectful. He has a dry sense of humor and enjoys being a bit sarcastic at times. He's loyal and trustworthy. He's also very adaptable.
Background: Aedric came from 1810. He's been well educated because he grew up in a very wealthy family. One day a metal rectangular shaped box popped into his bedroom, beeping and blinking with brightly colored lights. It was a time machine.
But of course, Aedric didn't know that.
The door to the time machine opened and he stepped inside. Aedric didn't know what anything was.
Dazzled by the many brightly colored buttons on the control, he pressed the big red one.
The door slammed closed and he was transported to the future.
Into the 2000s.
The present year to be exact.

Haha, really? I thought for sure there'd be another time traveler!
But thanks, I'm glad he's approved :D

Name : Robert Sanders
Age : 23
Species : Spirit-user
Powers : Can walk into people's dreams and shares spirit bonds with a few people. Is good at healing too.
Appearance : 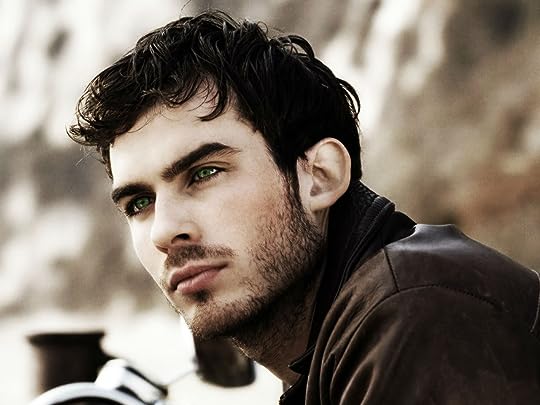 Personality : Is very charming, kinda womanizer, half-crazy, but has a heart full of love. Is witty, smart, lazy and gets angry very soon.
Background : He has an abusive father, who had thrown out his mother and him at a young age, grown up with his mother.

Name, Mary Hanson. Age 20. Gender, female. Species, spirit-user. Powers, can command as many spirits at any time and can speak to them through her mind. She can also read their minds. Personality, she is very kind and polite but gets angry very easily. Background, she lives with her father and has to care for him because he is very sick

reply | flag *
message 50: by [deleted user] (last edited Oct 10, 2013 07:36AM) (new)
Oct 10, 2013 07:35AM
Name: Alicia Holloway
Age: In physique, around seventeen. In age, a couple of centuries at most?
Species: She was one of the first mutations, created when a cure for her cancer was tested on her. Her cancer was completely cured, but she mutated rapidly, developing powers that were more for bad than for good.
Powers:
~Connection, but perhaps it isn't good. She can heal injuries and connect to anyone she has contact with, but at the same time she sucks the pain and injuries out of them and it makes her really weak.
~Prophecy - whenever she makes eye contact with a person their future flashes before her eyes.
~Photographic memory
~She can travel, but only a couple of kilometers a time and it really tires her out.
~Often she faints from all these powers.
Personality: Alicia is quiet, and though she is somewhat intelligent, she doesn't show it often. She doesn't really understand sarcasm or sadism. She doesn't often find it easy to adapt to change, and is often confused to a couple of centuries before the RP.
Background: Alicia was born a while before the present, in the early 2000s. When she was twelve she was diagnosed with cancer, but luckily a year later a 'cure' was around. She took it, as her family had enough money to make her one of the first, and like the few others who did she got a lot of mutation powers. (She was cured, but that wasn't the problem.) Her powers put her into a coma, the only of the betas and first mutants who had that fate, and she stirred again years later. She isn't sure how she survived that long, but it turned out that her mum's will said for her to be put in a cryogenic chamber.
Appearance: 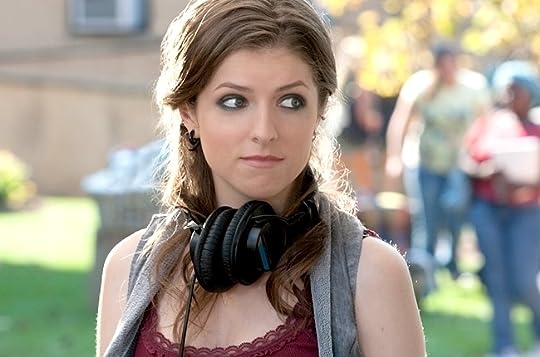