newest »
message 1: by [deleted user] (new)
Jun 09, 2013 04:06AM
Dragons
All of Tolkien's dragons share a love of treasure (especially gold), subtle intelligence, immense cunning, great physical strength, and a hypnotic power called "dragon-spell". They are extremely powerful and dangerous, though they mature very slowly. Because of this, Melkor's first attempts to use them against his enemies fail, as they are not yet powerful enough to be useful in battle. Despite their evil beginnings, they are not purely destructive by nature, as can be seen by Smaug, who wants to be left in peace, though he did force out the dwarves in the Lonely Mountain.
Dragon-fire (even that of Ancalagon the Black) is described as not being hot enough to melt the One Ring; however, four of the Dwarven Rings are consumed by Dragon-fire.

Personality: Zarnak is a ferocious dragon. A dark dragon to be exact. He is also very mysterious. Overall, he is deadly and a really bad enemy. He can be tamed with a kind and gentle heart. 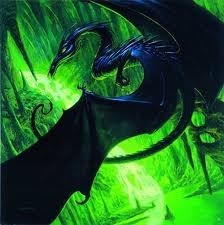 Backstory: He used to be a good natured beast. Until one day, Sauron slayed his family and corrupted his soul. He turned from a creature who would save anyone into a monster. A killing machine. He would rampage around and start to kill at random. He was greedy when he saw a huge amount of gold in a village he had terrorised. He swore to guard his treasure. Like all dragons, he has a passion for gold, and would kill whoever touched his property.

Relationship Status: Single, and NOT looking

Other:
There has been a prophecy that only one of pure heart and gentle soul can tame the wild beast and release him from the spell. Who might it be??

So.. I just send him in casually?

[Age:]
485
[Gender:]
Female
[Personality:]
Isbeil doesn’t follow ‘normal’ patterns of dragons. She likes gold, yes, but does not obsess over it. She prefers to sometimes collect people. She has 20 skulls, 10 kings, 7 princes, 2 princesses and a queen.
She was known to sleep for 200 years, after her children and mate were killed by humans.
Isbeil is still fierce, though, and fiercely stubborn as she hates to be told what to do. She has not shown warmth to any other creature than Elven for many, many years.
[Physical Appearance:]

She is quite a small dragon. 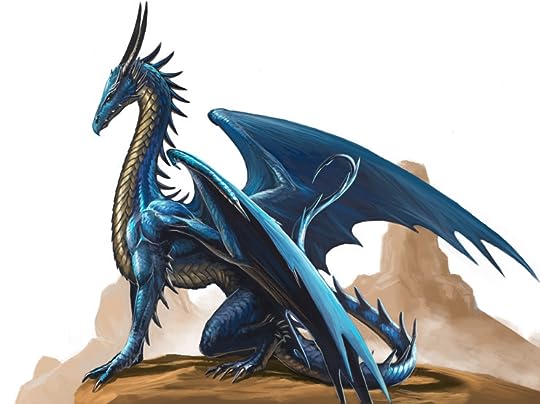 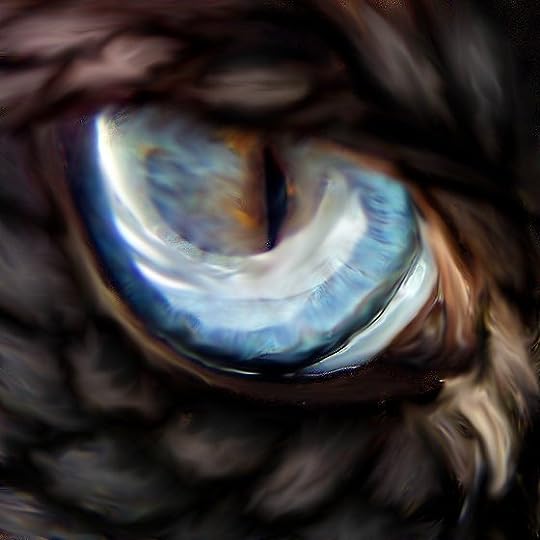 [Backstory:]
She was born to normal Dragon mother and a dark dragon father. Her mother was a stupid, mundane and gold loving, while her father an intelligent, majestic beast. She gets the Blue from her mother and the copper from her father. She was raised by a kind human, who even she believed would one day be her rider. That is, until somebody killed him. Isbeil was vengeful and furious. She did not feel sorrow, just anger that something of hers had been taken away.
She went and killed the murderer and the proceeded to the forests to become wild. She had two hatchlings, who lived to the age of 4 before being killed to sell for their scales of Gold. Isbeils mate, Qynter, was a pure gold male with black eyes. He died protecting his children and mate. Isbeil survived only because she slept at the very, very back of the cave. When she awoke and found them gone, along with now fresh human scent she roared in horror and searched the mountain in vain. From then on she slept. She slept for a very long time.

[Sexuality:]
Straight…
[Relationship Status:]
… She has had two hatchlings, now deceased, with her old mate, also deceased.
[Other:]
N/a

That was fast! Thanks!

First Name:} Roulette
[Last Name:] Legas
[Tittle:] The Stalker, Amethyst Shadow, Assassin
[Age:]555
[Gender:] Female
[Personality:] Roulette can be very persuasive. She can easily lure her prey into her den. She has a very suspicious tendency. Roulette does not believe everything, and often she can be very stubborn. She lives in a secure surrounding, and has trained herself to kill if necessary. She, as most dragons, guards her treasure, but unlike most, not with her life. She is friendly with people if they agree to her conditions, or else forget it!
[Physical Appearance:] She is very sleek. She isn't small, but is very strong.
[Scales:] Purple with hints of gold on it.
[Eyes:] Luminous gold
[Weight:]About 75 tonnes
[Height:]20 meters
[Distinguished Marks:]Gold claws
[Backstory:]Born when Sauron took over, she saw many people killed, which hardened her heart, the same heart which thanks to her parents was before soft and tender. When her parents were murdered, she wept. She wept while killing the men who had killed her parents. that was the day when she made a resolve never to be weak and let anything take control of her, not even her emotions, although sometimes she could get teary-eyed. Soon, she found a strong and powerful dragon called Kaspar and they eventually settled down. Kaspar is a red dragon, with copper claws. Roulette's was kinda confused, since she had murdered many mortals (humans) although she did it driven by madness. This earned her the tittle 'Assassin'. She used to go mad for periods and often had black outs. But with her husbands love, she grew back to her old self.
Relationship status:]Has a mate Kaspar, and is considering about having hatchlings.

Roulette had heard of this area, but had been too weak and confused to fly to The Golden Forest. Now, while her mate Kaspar was hunting, she set out to explore that area and hoped that she would find others who were like her. If not...then, as her mate had told her, she had the luck of a devil. "Oh well, here goes nothing" she thought and soared up high into the sky. She suddenly saw the forest, shining bright. She swooped down to examine the world hidden behind- or rather beneath- the golden tree tops. ((I hope I've not written too much, and I've kinda used my imagination for this!))

[Personality:] A arrogant and cocky dragon solely based on his sheer size. He views most things as unimportant so unless you have something golden he won't bat an eye. Unless directly spoken to, he may let you waist his "valuable time". His old age has not helped him get any wiser, and he doesn't try to act it. He does have a small soft spot he doesn't usually reveal. 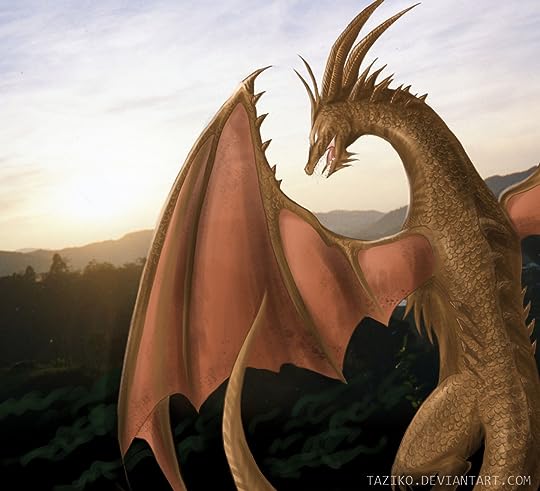 [Backstory:] At a young age he was a a particularly large dragon, not extremely big but big for a hatching. He was easily the strongest of any dragon his age, and when he left his mother he easily beat the other dragons. He soon had a nicely sized pile of trasure under him. He was a big dragon so not many things could stop him. He thought about helping Sauron, but his arrogants in his strength kept him from joining a side. Even after many years he still keeps growing. He figured out a way to shrink himself because finding a place to keep his treasure safe was hard. He now resides alone in a mountain where his treasure hoard is. He will sometimes leave the mountain to find more treasure.

[Other:] He got his tittle the sifter from being able to change to a smaller size

[Personality:] veati is a aggressive dragon. She is quick to anger and quite proud of herself. She spends a lot of time fighting instead of talking, but she may find you not a threat and not worth her time. She is also usually irritated and annoyed with things. She also vary impatient. 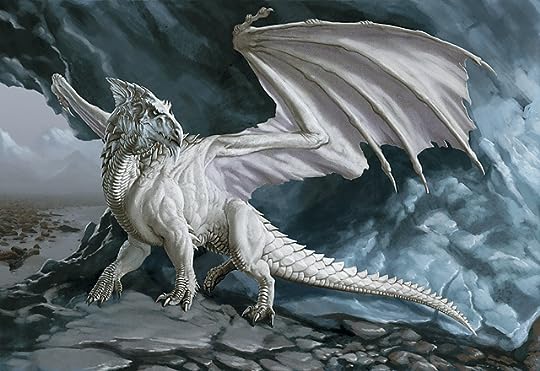 [Backstory:] Veati was the top dragon of her kin easily beating the others. She was the fastest, strongest, and most cunning of them. She easily had a large hoard in her first 100 years. She was strong and could easily beat any dragon out of the way. She became a legend because her fire so hot it was even blue, but no one in the past 10,000 years has seen her do it, so many believe it a myth. She has also been know for being fast and agile, never letting a thing touch her hoard.

[Other:] He fire is so hot it burns a color blue instead of red.

Mod
Fat and agile? Do you mean fast?

Mod
Okay, that just made me chuckle a little.

Mod
Neverwinter Nights, and that first one was a skit from the Fairly Odd Parents CN show that I watched a lot as a kid.

Mod
* looks at ilsa* help it's the picture you showed me!

Anyway, you two are hopeless, Ty and Thegotenza.

Personality: Warm hearted, prefers only speaking to one person at a time, as large crowds are what he calls " Overt and unnessesary "
Valdur is known to be the wisest and most intelligent of all dragons, speaking many languages that he learns in his spare time. 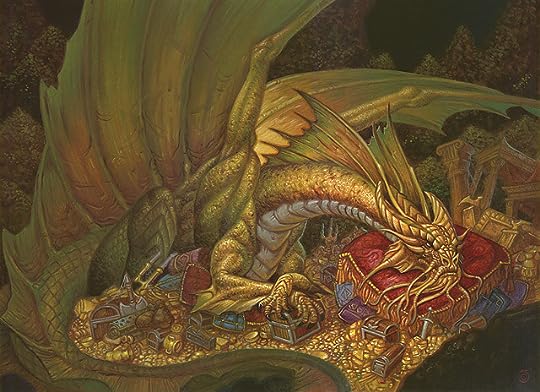 Scales: Golden, imbued with gemstones, like that of Smaug himself, although he has no openings, as his time spent in his cave of gold has been plentiful.
Eyes: Can change colors depending on his mood. (view spoiler)[ Red: Angry Blue: Curious Purple: Calm Golden: usually when he is in battle White: Before he casts his Dragonspell (hide spoiler)]
Weight: 2040
Height: 50 Ft
Distinguished Markings (If any): He has somewhat of a beard (If dragons could have one)

Backstory: Valdur was one of the firstborn of Melkors winged beasts in creations, although he was firstmost a non winged beast. After the war on the great fortress of Morgoth, he retreated into the mountains in the east, where the first dwarven lords had stayed their hand and collected money for the last hundred years. Deep in this cave, is where Valdur slept, after orcs had already purged the cavern, he had flew in and decimated them with his Dragonfire. Since those old days, He has learned ancient magics to take elvish form, and walks among those unwary of his immense power. 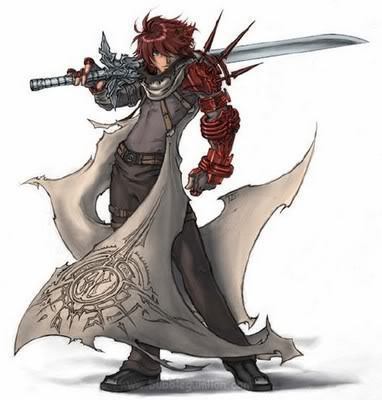 Sexuality: He is straight.

Mod
((Everyone's a little bit hopeless. But there's hope for everyone. God, I sound like a Christmas card right now.))

Mod
Great character, by the way.

Mod
Come on.... Somebody approve them

Mod
Well maybe one of us should try out for mod, so we can actually approve things.

Mod
Now where to do that * looks at topics*

Mod
I'll ask sarah for the position, I've been in this group since it was first made, and have constantly contributed.

Mod
Ty and Mr Rock your drgons are approved!