newest »
message 1: by [deleted user] (last edited Jun 09, 2013 04:04AM) (new)
Jun 09, 2013 03:59AM
Goblins
Orcs are technically Goblins. In The Book of Lost Tales the names Orcs and goblin are given to creatures who enslave and war with the Elves. Goblins have a taste for meat, especially that of poneys and Elves and Dwarves and Hobbits. They are brutal and disgusting creatures who follow the rule of Sauron and Saruman.

Orcs
Orcs or Orks are a race of creatures who are used as soldiers and henchmen by both the greater and lesser villains of The Silmarillion and The Lord of the Rings — Morgoth, Sauron and Saruman.
Although not entirely dim-witted and occasionally crafty, they are portrayed as miserable beings, hating everyone including themselves and their masters, whom they serve out of fear. They make no beautiful things, but rather design cunning devices made to hurt and destroy.

THEY HAVE RANKS:
Warrior
Commoner
Soldier

[Last Name:] See some of her titles
{Titles/other names} The hunter, Princess of the Goblins of Moria, The pale orc's daughter, the destroyer, Weapons Crafter, The defiler's daughter

[Personality:] She is ruthless in battle. She is kind to other urk-hai. She is fearless in battle, but with serving her master, Rokal fears her master. She hates The neutral people. She would gladly betray her master and go on the Bright Side. She keeps secrets from her father. Rokal does not tell her father about what Rokal is planning on doing. She only tells him later on and he well, he understands. Rokal is glad that her mother is dead because she would never understand what Rokal wanted to do. 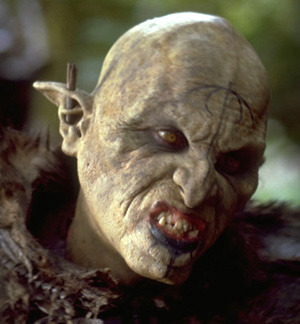 Hair: none
Eyes: Yellow
Weight: 128
Height: 5"3
Distinguished Markings (If any): See her physical appearance and look on he forehead, that mark there is what her distinguishing marking is.
[Backstory:] She was born and raised in Moria, Mount Gundabad. She had a younger sister, who was 21, but that sister was killed last week. Rokal does not remember her parents at all. She remembers almost next to nothing about her past. She found out that Sauron had other Urk-hai kill Rokal's mother. Rokal's father is a secret, but it is later revealed that Rokal's father is Azog the defiler. Rokal has hated Sauron since then and only submits to him out of fear. She would gladly betray her master and leave him behind, which she is secretly plotting to do. Once she has done that she will help the Bright Side win this war and she will be a great asset to them. She loves to make weapons, fight, and kill things, but only the enemy. But it is later revealed that she was forced to kill her own sister.

ya, only at the time Rokal doesn't know she has a brother