Brief Description of Appearance: spiked scales along her back, white scales

History: Born an only child she has always been a free spirit. About two years later her parents died at war and she became an orphan. Now she lives alone in a cave searching for more dragons.

Both when done, approved

Triseaton3 - Please move her to Supernatural/Power Welding Character's. Also, please add more information and stick to the form above. Thank you. :)

Mod
NOTE: This is going to be one of the demons in the roleplay Ellsworth's Demons.

Appearance: (I'm sorry, I would do a picture, but I can't really find one that I'm imagining. So, I'll just describe it)

Brief Description of Appearance: Not very tall, but very powerful. Probably 5", but is always in a crouching position. A blue smoke covers his body. He does have hair, but it's hair made out of smoke.

Personality: Very wise. In fact, he was one of the wisest demons in the house. Not the leader, but kind of acts like it. All of the demons are afraid of him, but not SUPERR afraid.

History: His parental demons (I guess..) were one of the dumbest demons alive. People used to make fun of it because of it when he was little. When he turned of age, he decided to study up. He read, "Demons for Dummies" and did a lot of research in the library in order to be the best demon possible. Both his parents are dead now, but feel they would be really proud of him.

Powers/Abilities: Very wise, stealthy. Knows how to make sneaky deals, and get out of them fast. King of finding loopholes. Not trustworthy.

Oh thank God - that means I won't have to do Albath. Thank you Samoorii! I didn't really want to do him anyway.

Actually - I change my mind. I WANT TO DO ALBATH.

NOTE: This is another demon appearing in the roleplay Ellsworth's Demons. 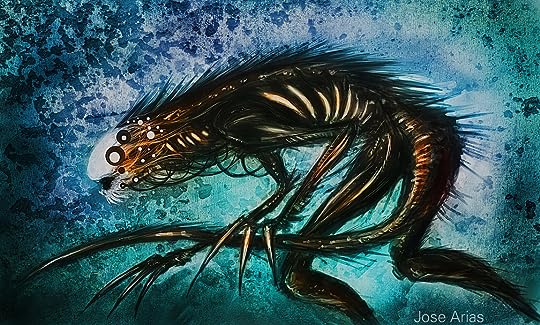 Brief Description of Appearance: Hunched over, Albath sands at 5'6. If he pulled himself to his full height, he would be somewhere pass 6''. He has a long, black, leather-like tail and knives for claws. His face is skull like. His teeth are just as sharp as his claws. His body is lined with black (body) and white (neck/head area) fur. Albath has a extremely thin stature, making him quick and agile.

Personality: Albath is also known as the lunatic of the Ellsworth house, continuously making clicking/growling noises with his mouth. He also cannot stand still, and must move around. He rarely talks, and when he does he always refers himself in the third-person tense, and it never makes sense.

History: Albath supposedly lost his mind after his “rising” into this world. Something happened, and no one knows what.

Powers/Abilities:
~ Has a great sense of smell.
~ Can confuse his pray easily.
~ Is speedy and powerful with attacks.