This topic is about Eye of Dominion
155 views
(AUTHORS) PROMOTIONS > David Staniforth: Alloria 1 & 2 on countdown deal, only 99p/99c

Hi all. I've been writing for around ten years, but only published as recently as November 2012. I write all genres, but prefer YA fantasy. That is incidently my favourite read too. All my books are only available as e-books at the moment, through Amazon and smashwords.

Alloria
Was published only two weeks ago but has been well received on goodreads so far. Finger crossed. If you'd like to check it out, you can find it here:

Fuel to the Fire and Ruler's Desire are a little darker. and to my mind are 15+. If you'd like to check them out you can find them here:

Edit to say I have more than one finger to cross (fingers: plural)

Ok... I know you're all to busy either reading books, or talking about books you intend to read, or have just read, or are in the process of reading to go and have a look, so here's the blurb for Alloria for you:

Perhaps the night they celebrated Alloria’s tenth birthday was not the correct time for Thomas and Bessy Merryweather to reveal that they were not actually her parents. Perhaps they should have told her years before how they discovered her in the cellar of their cottage, bare-footed and clutching under her arm a rag-doll she called Saphjrina. Perhaps they shouldn’t have hidden away for seven years the amulet she had around her neck, with the promise of gifting it back to her when she reached the age of ten. Had they told her sooner, had they told her when she was less spirited, she may not have ventured into the cellar with her friend Nat and discovered how the amulet opened up a mysterious labyrinth. Had they kept it from her altogether, their lives would not be in danger; their lives may not have, but the plight of an entire planet would have been.

Feel free to post on here if you have any questions about my books, or writing in general, or about books I like to read

Thought you might like to know that Alloria and my other two novels Fuel to the Fire and Ruler's Desire have all recieved excellent 5 star reviews from a respected goodreads reviewer.

You can check them out here:

Typical young girls; the protagonists of both my books overindulged on chocolate yesterday, and this morning are feeling rather queasy :~/

The latest review to come in for Alloria. I'm not quite certain but I think Lily kind of liked it:


Lily (The Novel Nerd) rated it 5 of 5 stars
Shelves: favorites
Rated *It was amazing* 5-stars

Why you ask? Because it was TRUELY amazing!!

I could probably sit here and describe every emotion i felt while reading this, but unfortunatly i dont think goodreads will allow as many words.

The story follows a young girl by the name of Alloria and her best friend Nat. They go on a magical journey through the labyrinth and meet a whole host of interesting and wonderful people.... ok and some right horrible ones aswell.

My favourite? BANE!! He is the gentle giant everyone wishes they knew.

The writing style is fantastic, you really get to know the characters and you wind up really caring for them. Your truely brought in and immersed into the world, so much so, i didnt want to leave! That brings me onto my one and only downer... i want a part 2 now!! :) haha. Its going to be a killer waiting for it, but i will, for as long as i need to.

Victoria rated it 5 of 5 stars

I come to the end of another Staniforth novel and find myself once more hopelessly in love with the characters and hoping for more.
Alloria is a beautifully rich novel that follows the title character, a young girl, and her friend and guardian, Nathan as they are unexpectedly thrown into another world – a world of magic and monsters and dark powers – and forced to undergo a perilous journey to return to the parents she loves, who are in mortal danger back home. They are aided by Bane, a character who could easily become a contender for my favourite fictional warrior.
This could so easily have been just that, a standard swords and sorcery book and been a good book for it. Instead Staniforth weaves in a much deeper emotional level to the story, as Alloria grapples with who she is and where she belongs. I also like the richness of the setting in this book. People from different districts had distinct dialects and customs and, despite being set in a world where magic is possible, it all felt very believable. For example at one point, a few weeks after having her long hair cut short Alloria puts a necklace on and automatically goes to sweep her hair back, before realising she doesn’t need to, and it brings her a moment of sadness. The small details like this one – knowing that a young girl would be sad about the loss of her long hair, the changing of dialects and accents and landscapes, that make this stand out from other fantasy novels I have read. Even during a Gutterwraith attack, or while battling dark powers it feels very real.
The relationship between the two children is beautifully written, as is the development of trust between the children and Bane. Even the “walk-on parts” were well-rounded, full characters, easy to fall in love with. I hope I’ll soon meet lots of them again. I think this may be the first in a series – there are one or two story arcs that I feel could be further explored, and the ending would suggest more to come (fingers crossed), but it stands nicely on its own and is well worth a read.

Alloria has been out for almost a year now, selling on average 3 books per month. A slow grower then, but one that seems top be enjoyed by those that do read it, generating a 4.87 average review score. Why not check it out?

Go on, read the sample on Amazon. What have you got to lose :D 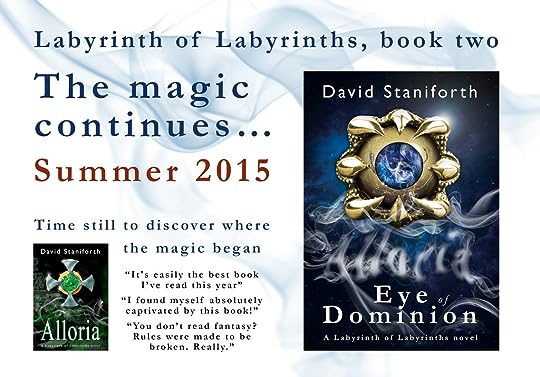 You'll have to wait a little while longer for book two, but if you've not read book one, that leaves time to catch up with the magic.

Still not ready to commit? Check out what your fellow Goodreaders think of the book: Alloria 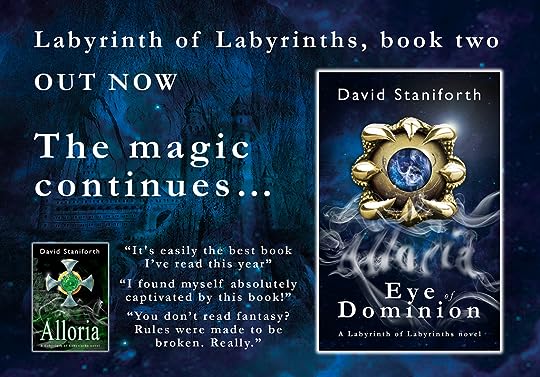 To mark the release of

I am also giving away a signed paper back of

Not one, but two books on a countdown deal.
If you ever wanted to try my fantasy titles, now may be a good time. 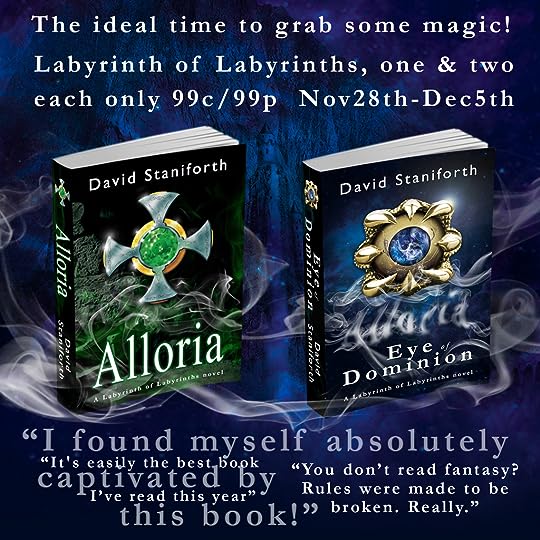 Due to Amazon restrictions, the reduced price is only effective in the UK & US, but here are the world wide links anyway:

On her tenth Birthday Alloria discovers her true identity is a mystery.

Her adoptive parents return to her an amulet they took from her after finding her in their cellar,
bare-footed and clutching a rag doll.

Exploring the cellar and discovering that the amulet opens a mysterious labyrinth,
Alloria embarks on a quest in search of answers, a quest that flings
her into an adventure brimming with danger, pain, love, magic, and brutal honesty.

Alloria returns to the planet of her birth, triggering dark forces that begin to influence her brother, Yrion. His fears nettled, Yrion is driven onto a path for dominion that involves those beyond the realm of the living and a pursuit across the far reaches of the universe in a fight for survival.