Awesome ;D What do you want this to be about?

An Academy For The (Arts, Rich, 'Special' as in powers, troubled :P, etc)

Island (Shipwrecked, sent because they're criminals, sent to be protected from something, each ended up there differently, etc)

Or, I don't know, any others we can think of XD

XDD I'm sorry, but I just can't understand why everyone goes for that one XD

Sorry, sorry. I copy and paste those suggestions on just about every RP I got to, and everyone always goes for the island ;P

So, are they criminals getting shipped to some high-security prison, when the ship wrecks and they land on this island? Since you want Shipwreck and criminal ;P

Mkay, I'll follow after you. . . to see which of my male characters would go with your girl ;P 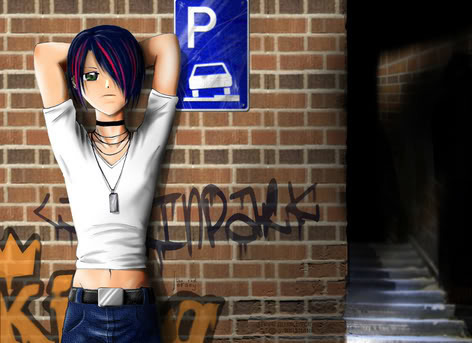 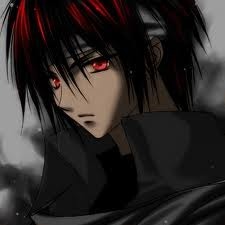 Agapios coughed as he finally made it to shore, choking up water as he dragged himself out of the water.

His lungs burned, and he had wounds covering his body due to the debri he had hit on the way in, but I smirk slowly spread across his lips. He looked back at the sinking ship behind him, a dark chuckle coming from his mouth.

They had tried to take him, they tried to lock him up, and look what happened. The ship had wrecked and he had jumped off during the commotion, swimming to a nearby island.

He doubted there were any other survivors, but that suited him just fine.

Agapios's pleasure was ruined soon, of course, when he noticed another person swim up to shore. Luckily, it seemed it was another criminal, other wise he would have been forced to kill her.

He flashed a knife quickly, before it disappeared into his coat once again, just a warning for her not to try anything. You could never tell with these female criminals, they were the moodiest things.

reply | flag *
message 18: by [deleted user] (new)
Mar 09, 2013 03:43PM
Arrow glared at him. she gripped her dagger and threw it in the sand as she pressed her hand against a deep cut on her arm that was bleeding badly

Agapios raised an eyebrow at the dagger, now planted firmly in the sand, and then at her arm. He walked over to a tree standing in the sand nearby, leaning against it with a look of complete calm on his face.

"What's the matter? Get a cut? Looks like it's bleeding pretty badly, you know, you could die of too much blood loss out here." His voice was even, completely relaxed as he watched the girl.

Agapios smirked at her respond, watching her as she tied some cloth around her wound. He should really be thinking of a way to get off this island, or maybe making a shelter. For a criminal like him, staying here might not be a bad idea.

The only problem was the girl. She had been on the ship, as well, and she obviously wasn't a sailor. Which means they were taking her to the prison they had planned to take him which means, she was not someone he planned to turn his back on. Criminals like them, they couldn't be trusted.

reply | flag *
message 25: by [deleted user] (new)
Mar 09, 2013 04:10PM
Arrow grabbed her dagger and attached it to her belt, she stood up and looked at Agapios before looking back at the sinking ship

"Messed up fate, isn't it? We get out of that rotten prison, but now we're stuck on this island. Together." Agapios sighed. "The world does seem to hold a grudge against me."


"Probably the prison." He said with a shrug, "At least here there is only one person I have to deal with."

she nodded her head in agreement "we should at least get some shelter set up."

"Probably, but are you planning to stab me in the back once you have used up all of my amazing skills?" He asked with a smirk.

Agapios smiled, seems this girl might just make landing on this island a little more interesting.

"Well then, you better keep your eye on own back, as well." He sighed, turning around to start off into the jungle. "Guess I'll go search for supplies, come if you want."

Agapios shrugged, continuing into the jungle. His knife slipped into his hand then up his other sleeve, then showed up on his shoe. He kicked it in the air, catching before it came down to his waist.

Playing with his knife, he searched for any good wood supply, and good trees to build in.

reply | flag *
message 38: by [deleted user] (new)
Mar 09, 2013 06:51PM
Arrow walked through the jungle with her dagger in her hand, she walked quietly until a bird landed in the tree above her, she slowly moved the dagger over her head and threw it at the bird, the dagger went through its chest and it collapsed onto the ground.

Agapios glanced up as he walked underneath a huge oak tree, its limbs growing thick and long into all directions. That was strange. An oak tree, out here?

Curious, her jumped onto the enormous roots and began climbing from limb to giant limb, finding something very interesting near the middle of the tree.

A hole had been carved out, like an entrance covered in a veil of vines. He pushed the vines aside and jumped in, careless of if the hole led to anything dangerous.

Of course, it was far from what he had expected. Looking around, Agapios was surprised to find a home carved out inside the center of the tree. It's furniture all bamboo and other such supplies you might have found in the jungle surrounding.

Someone had obviously spent years making this shelter, and died doing so, if the skeleton on the bamboo couch proved anything.

"No, but I made a quick shelter. Nothing fancy, just something I whipped up!" Agapios called back, lying easily as he climbed back out of the extravagantly carved out oak.

"Of course, you don't believe me?" Agapios asked innocently, looking up at her with his eyes widened. Their red color didn't really help him look innocent, however.

Agapios sighed dramatically, as if the pains of being untrusted were too much for him.

"How I long for trust and love." He said in the same dramatic tone, his hand on his heart. His red eyes glinted as he looked up at her.

It seemed it was easier for him to talk to another criminal than it was for him to speak with normal ones. Normally he was simply a dark outcast who never spoke a word to anyone.

"The horrors of this life to take on, yet no one to share such feelings with. It's too much for an innocent young man like me." He rolled his eyes as he said that one, turning to pick up the skeleton behind him. "Speaking of horrors of life, what should we do with this?"