The Once and Future King by T H White.

This book is NOT a Disneyfied horror, as you might fear. I read it many years ago and have several times since. It's in three parts and begins with the childhood and education of the young Arthur (known to his foster-brother as Wart since it sort of rhymes with Art). Merlin's Owl helps with his education. The lad is introduced magically to lots of animals and learns from each of them, strength, patience, courage etc. They all, even the least significant, have something worth learning.

Parts 2 and 3 cover the parts of the Arthurian Legends you might be more familiar with. T H White writes with such wisdom though, that the book touches on the very deepest of human emotions and dilemmas. It covers subjects like honour, betrayal, the good of the community against that of the individual. It deals with a life that has to be lived apart, by its nature, and the loneliness of the outsider. It leads us to consider how the King has to balance the love of his friend, of his wife, the knowledge of an infidelity he would rather not acknowledge, the betrayal by another woman, family honour - oh, it's a wonderful book and involves me so deeply every time I read it!

The first part might seem trivial (although if you look deeper it isn't) but the rest is pure drama. I love it!
Ignite

another WOW!!
I also read this many moons ago, and I would love to do so again!
good start to the year with these choices...I am spoiled as to which to start!!

I've not read this since my childhood! I'm really looking forward to this, as soon as I've finished Whispers Underground

My 9 year old daughter has now read it and also enjoyed it. It blew me away when I first read it years ago.

It blows me away each time Bev. I thnk he writes with great wisdom, humanity and humour.

Inspired choice to start the year! Read this years ago and loved it. Will enjoy reading it again

Since I love Arthurian stuff, I couldn't resist buying this. Oh my poor bulging Kindle. Don't know when I'll get around to it though.

Oh, do it now Andy! I absolutely love it.


You know when you tell a friend he'll love something and he can't stand it? ..... It was nice knowing you!

Ignite wrote: "It blows me away each time Bev. I thnk he writes with great wisdom, humanity and humour."

Yes he does a lovely piece of writing.

Ignite wrote: "Oh, do it now Andy! I absolutely love it.


You know when you tell a friend he'll love something and he can't stand it? ..... It was nice knowing you!"

I'm sure I'll love it, Kath. Might take me a year to find out though ;)

I've had to go and get a copy. Mine had gone missing., I searched the house twice yesterday, and only found The Sword In The Stone.

You remember the scene in the Hobbit, where Smaug finds a cup missing from his hoard? I was like that.

Were you breathing fire?

A missing book? Everything stopped whilst I turned the house upside down. And then sulked.

I was like that a couple says ago Will. Only it was a receipt, not a book.

A missing book is a crime against nature, which cries to the heavens for vengeance!

So, I've finished the first book in the collection, and loved it for the wit, warmth and writing.

But i'm not enjoying the second book at all. I'm finding it a bit preachy at the moment.

The second book starts off with Arthur as the new king and not very good at statecraft or ruling! I think it's preachy because it needs to show him as in need of guidance. I prefer the later books when he gets into his stride and then realises that you can't solve everything with wisdom and good judgement. He has to choose deliberately not to notice his best friend and his wife have a need for each other. He can't be seen, as king, to be weak and to let it happen so he tries not to see it. I love the deceptions of the women - the spancel - oooh, heck!

I'm not sure I could read this book without my fandom head crying and chucking it across the room. Merlin & Arthur 4eva.

Not sure I understand what this fandom stuff is. Remember, I'm aged!

LOL! Fandom is just the group of fans relating to a certain show/book/pairing. I really loved the new Merlin adaptation on the BBC so I'd have a hard time separating my love for that and the fanfiction I read about it, and this book!

Ah. But there are so many Merlins. I think my favourite is the one from Mary Stewart's The Crystal Cave. A good character is so mighty s/he cannot be encompassed by a single author's imagination.
Who said that?
Oh, I did, just then!

I've just finished reading this book myself. I love it! There is a bizarre mixture of historical facts, pure fantasy, historical inaccuracies and legend/myth .. well ... all I can say is Blast me to Bermuda!!

... and back! Hi Bob. I'm glad you've enjoyed it. I know you're big on the myth/legend stuff. I love the fact that each person who writes about Arthur and Merlin adds another layer to the legend. One thinks of Mallory of course, but all Arthurian stories accrete a little more nacre around the pearl! I'm waxing lyrical again!

Ignite wrote: "Ah. But there are so many Merlins. I think my favourite is the one from Mary Stewart's The Crystal Cave. A good character is so mighty s/he cannot be encompassed by a single author's imagination..."

There is! I've ever really got into one though, so maybe it's more of an anxiety that the rest won't be just as amazing!!

I wonder what it is about Merlin and Arthur that captures the imagination so? In British legend we have Michael Scott, Myrrdin, St Germain and many others, but it's Merlin who has survived with as much interest in him now as there's ever been. Up until the turn of this century, you'd say 'wizard' and kids would immediately say 'Merlin!' Now of course they'll say 'Harry Potter'...

I think it's because he is the guide, the mentor, the knowing, critical friend who not only brings Arthur to the throne and shows him Kingship but in many stories is actually instrumental in bringing Uther to Ygraine to ensure Arthur's conception. The problem is that Ygraine's husband is then almost immediately killed so Uther could have father the child legitimately. Merlin foresees that Uther and Ygraine must be the parents; he doesn't foresee that it could be achieved legitimately. It's an example of how the magic, the sight, only shows you what it wants, not what you need.

I think Merlin can be a comical or a stern character but to me, he's at his most sympathetic when he wields a great power but can't control it. He's someone we might envy for his power but yet, when we look deeply, we see he is in thrall to it. He's not in charge of it.

I say a bit of both. In the HP books, Merlin does feature, so it's a nod to the past!

Ignite wrote: "I think it's because he is the guide, the mentor, the knowing, critical friend who not only brings Arthur to the throne and shows him Kingship but in many stories is actually instrumental in bringi..."

Very true. So many books hint that Merlin is not always in full control of his power. I think that makes him more human, more accessible, and maybe even a little tragic

Yes. Ultimately his end is tragic. He is captured, enslaved by Nimue/Vivian (depending on your version!) in spite of all his powers. In some stories he colludes with this; he's a willing captive.

I think we all envy his gifts and feel maybe a touch of schadenfreud that in spite of them he ends up no better than us. Or maybe (like me) we all love an underdog!

Plus of course, Merlin has a tragic destiny in the hands of a woman..

Don't you all? Am I being cynical here?

Or disloyal to the sisterhood?

After a convent education, I'm off sisters. After a scientific University education, I rather like men. I got to know many more of them.

And Colin Morgan plays him. 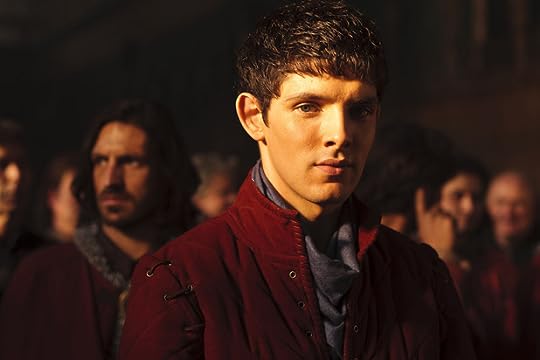 Merlin. I watched it avidly, sad as it is for a 45yrld man to admit. I thought the ending was ... quirky. They should have shown him return to Camelot, have a big hug off Guinevere, THEN jump forward in time to glastonbury. Would have made a nicer ending!

I thought the same Bob! I would of loved a non-homeless looking Merlin as well!

He's Northern Irish Ignite, I must cheer on my fellow countryman!

Merlin. I watched it avidly, sad as it is for a 45yrld man to admit. I thought the ending was ... quirky. They should have shown him return to Camelot, have a big hug off Guine..."

They should have let YOU write it Bob!

Lol And you know I would have loved to have done it too! Never mind. When they make a serial out of my books .... (optimist Bob, optimist!)

We'll have to get Elle to read them.

so many books, so little time!

Ignite wrote: "We'll have to get Elle to read them."

I think she'd enjoy them ... they cover characters she likes!

I think I would! I have them on my wishlist! Eventually I'll get around to them.. I am going to make an effort to read books from our authors this year!

Late to the party but as I said, this was a book I read over and over so I'm really interested in your views. The tortured soul of Lancelot particularly appealed to me as an adolesecent but the wild Orkney character of Morgan le Fay made a big impression too.

In 'The Sword in the Stone' I loved the relationship between Merlin and young Arthur, and Merlin's teaching methods ought to be in the National Curriculum :)