Mod
A Tech Giant with a Legendary form. 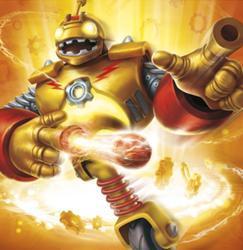 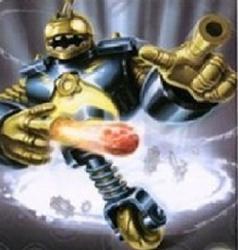 While still an All-Star Roboto Ball player, Bouncer had a big, lively personality that helped popularized the sport. Even after he no longer plays the sport of Roboto Ball, he still holds a sense of loyalty to his Mabu fanbase, who remembered the security-bot fondly from his playing days, and Bouncer became determined to defeat the Arkeyan King, not wanting to let his fans down when they were enslaved by the Arkeyans.

For centuries, Skylanders have competed in gladiator-style events inside epic arenas of sport, where only the greatest of combatants become immortalized as magical, golden statues that stand watch as guardians. These are the Legendary Skylanders. Whenever the world is in peril, special Portal Masters can bring these statues to life and summon the Legendary Skylanders to defend Skylands against any evil that threatens it.

I-Beam - Shoot lasers from your eyes

Targeting Computer - Target your enemies with the shoulder rockets

Fists Of Destruction - Shoot your rocket-fists at enemies

Targeted Missiles - Target enemies and fire missiles at them

More Missiles - More missiles can be fired at a time

Laser Speed - Blast laser beams from your eyes while sprinting

Catchphrase: Deal with the Wheel!

Mod
I got him Yayz!

Mod
Yea! Will get him soon!