Got a manga you want to do?
Ask here.

This was a good idea, now lemme think of good manga to rp....

haha Skip Beat! love that one

No! Not yet! I'm not very far into that~

darn it! lol hurry and read it gets crazy!

how about host club? or hana no kishi or deathnote or lol there is alot

YAY! Finally someone who reads it!

YESH!
I just had something else in mind.....
High School of the Dead!

i started reading that but then got bored of it..didn't get passed the vol.1

it's actually really good if you watch it first, then skip through some chapters to read the rest.

Name: Minnie Mouse
Manga: SA (Special A)
Plot: A girl has always been second to her childhood rivalry. When they were six years old, their pro-wrestling loving fathers introduced them to each other. Assuming that she was the best in wrestling, the young girl challenged the boy to a wrestling match only to be thoroughly defeated by him. Ever since that fateful incident, the girl swore to beat the boy in school grades, sporting events or any competition. To do this, she has enrolled in the same school as him since elementary. Now she attends Hakusenkan, an ultra elite school for the wealthy, that costs her carpenter father a lot of money. The girl and the boy are the top two students in the school, with the boy holding firmly to that number one position. While the girl considers him to be a rival and important friend, she is completely unaware that he is in love with her.

lol i read special A, i forgot where i'm at though XD

and I will try Fiend!

I got halfway through it but stopped reading it for school. I just remember really enjoying it.

Yeah I remembered laughing about it

Name: The Mad Bunny
Manga: Ouran High School Host Club
Plot: Haruhi is a poor tomboyish student at a school for the ultra-wealthy, and is able to attend because of a scholarship, but is unable to even afford a uniform. One day, she stumbles across the peculiar but very popular Ouran Host Club. She tries to leave, but accidentally breaks a vase, and is unable to pay for it. She's told that she'll have to stay and do odd jobs. That is, until they decide she would be more valuable as a club member. Not realizing she's female due to her appearance, they fix her up and give her a male uniform. She's an instant hit, so they decide to have her keep up the charade even after they find out the truth. Haruhi, being common almost to a fault, doesn't know what to make of the unconventional activities of the Host Club (or of the even more unconventional members), but having little choice, she plays along. Before long, real bonds are formed, friends made, and Haruhi finds herself accepted in a way she could never have been otherwise in this affluent school
Image: 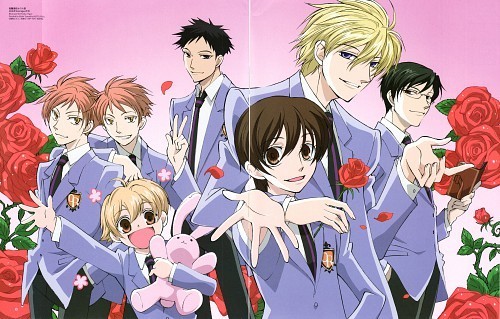