Around the World discussion

235 views
Ask Each Other > Finding books from less-represented countries

newest »
message 1: by [deleted user] (new)
Dec 18, 2012 03:23AM
It would be helpful to me, and perhaps to others, to have a thread for requesting titles and authors for more obscure countries. Please give the country for which you seek a book and any rules you've imposed on your challenge. I'll post mine below.

My rules: The writer (or one writer, if there are multiple authors) must have lived in the country for at least two years. Books set in the country are preferable, but this isn't a requirement. Genre doesn't matter.

Countries I'd like suggestions for:
Comoros: I've read A Fish Caught in Time: The Search for the Coelacanth and I have a drama/poetic something in French (a language I functionally don't read).

Palau: I read a governmental report of over 100 pages on education in Palau, but I'd like to read a book, even if it's a monograph.

Andorra: I read a cookbook by Eric Ripert, who was raised in Andorra and says this influenced his culinary style, but the book doesn't go into it.

I'd also be happy for a recommendation for a Basque writer.

I'd also like a better book for Bahrain. The one I read was historically important but bland.

Shirley Deane (author of The Road to Andorra) and her family didn't live in Andorra for very long, but they did visit all of the villages and try to learn about the culture. The book was written in the 1960s however, so it does not exactly provide a modern view of the country.
For Palau I found a book called The Fish and Rice Chronicles: My Extraordinary Adventures in Palau and Micronesia. I don't know how long the author lived there and if it meets your requirements, but several Palauans reviewed it on Amazon and enjoyed it.

reply | flag
message 5: by [deleted user] (new)
Dec 18, 2012 04:15PM
Thanks. The Palau book sounds better than reading the education report (not that it wasn't interesting, it just wasn't quite a book).

I've wishlisted The Fish and Rice Chronicles and downloaded MY ARAB SPRING.

Osho wrote: "I've read books for these countries, but I want books that match my rules better or that are more emblematic of the country.

My rules: The writer (or one writer, if there are multiple authors) mu..."

For a Basque writer, I can highly recommend

by Bernardo Atxaga. I found it a brilliant book.

I ran across a couple books for Bahrain: Travel Letters from an American Living in the Middle East-Bahrain: And Other Travel Tales and My Beautiful Bahrain: A Collection of Short Stories and Poetry about Life and Living in Bahrain. The author of the first book lived there for three years, the second seemed to have multiple authors.

The Stones Cry Out! is written by Josh Raul Conte, a native Andorran. I'm not sure where the book takes place.

I read The Road to Andorra and it is a nice look into the Andorran culture (written in the early 60s). The author only lived there for about a year and a half (she is from Australia originally).

For Bahrain, I picked up these two on Kindle:
Crowded With Voices: Thirteen Years In The Middle East (I think the author is of Indian descent, but lived in Bahrain for several years) and Bras, Boys, and Blunders: Juliet & Romeo in Bahrain, a light YA read (author of Indian descent and grew up in Bahrain).

For Palau, Being a Palauan. Author not from Palau, but book offers good insight into culture.

Chelsea, my rule is that the author must have lived in the country for at least 2 years, though those look interesting.

"This is the story of how that dream became a nightmare and of his complete dedication to his faith and ideals throughout the various vicissitudes of his life from his ordination until he is driven from the priesthood by a practicing homosexual archbishop. This is story of that nightmare."

Osho wrote: "From the description of The Stones Cry Out!:

"This is the story of how that dream became a nightmare and of his complete dedication to his faith and ideals throughout the various vicissitudes of h..."

Does anyone know of a good book for Brunei? The only "books" I can find for it are Some Girls: My Life in a Harem and Fifa 192: The True Story Behind the Legend of the Brunei Darussalam National Football Team neither of which I have much interest in. I don't have any rules, it doesn't matter if it is fiction or non-fiction.

Notes from the Jungle - International Education in Our Time

A Photographic Guide To Birds Of Borneo, Sabah, Sarawak, Brunei And Kalimantan

Wild Borneo: The Wildlife And Scenery Of Sabah, Sarawak, Brunei And Kalimantan

Osho, for Basque authors I can recommend Miguel Unamunoand Pío Baroja. They are 2 of the greatest authors in Spanish literature, and both happen to be born in the Basque country. Some of their books are translated and even free online.

Thank you, that's helpful. I'll have to see if I can find those wildlife books, I bet they are filled with pretty pictures!

I ran across this website and thought it could be helpful:
http://www.packabook.co.uk/
Just click on the country and it will give a list of travel memoirs, novels, and guidebooks along with their descriptions.

Has anyone any ideas for South Sudan?
South Sudan only became an independent state on 9 July 2011, so I am not expecting there to be many authors giving South Sudanese as their nationality, but I can live in hope.
The closest I have found so far is A Long Walk to Water: Based on a True Story, which is partly about a 'lost boy' from South Sudan, but written by an American.

Hi Val, I found a few books for South Sudan, most of them seem to be about the "lost boys" hopefully one of these will be helpful:
They Poured Fire on Us From the Sky: The Story of Three Lost Boys from Sudan This book is written by three boys from southern Sudan about there experiences during the war for independence.
The Humanitarian (not listed on goodreads): http://www.amazon.com/Humanitarian-1-...
This book is set in the new South Sudan, however the author appears to be foreign.
Lost Boy, Lost Girl: Escaping Civil War in Sudan Like They Poured Fire, Lost Boy, Lost Girl takes place in southern Sudan before independence, but does have Sudanese authors.
From Bush to Bush. Journey to Liberty in South Sudan I don't really know what kind of book this is, if it's a memoir or a historical account, but it is both set in South Sudan and written by a South Sudanese.

Thank you for those Amanda.
From Bush to Bush. Journey to Liberty in South Sudan seems to be a mixture of memoir and political analysis. It looks the most interesting, but is very expensive.

also by Margaret Brooke.
They are both about her life as Ranee in the 19th century. She was married to Charles Brooke, the White Rajah of Serawak.

Mod
Val wrote: "Has anyone any ideas for South Sudan?
South Sudan only became an independent state on 9 July 2011, so I am not expecting there to be many authors giving South Sudanese as their nationality, but I c..."

Hi Val - if you're still looking for one, check out What Is the What.

Thanks Lilisa.
I have ordered From Bush to Bush. Journey to Liberty in South Sudan through the inter-library loan system. It may take a long time to get it, but I am on a waiting list.

Mod
Val wrote: "Thanks Lilisa.
I have ordered From Bush to Bush. Journey to Liberty in South Sudan through the inter-library loan system. It may take a long time to get it, but I am on a waiting list."

the humanitarian sounds like a great book and has 4 to 5 stars from readers. south sudanese book

Does anyone know of a good book set in Liechtenstein? Travel and adventure memoirs, mysteries, and historical fiction are my favorite genres, but I'm not very picky, as long as it isn't extremely political.

Mod
A Year of reading the world (http://ayearofreadingtheworld.com/the...) has these down for Liechtenstein

And this http://ayearofreadingtheworld.com/201... was her post about it. May give you a couple of ideas?

Thanks, that helps. I'll be sure to take a look at those!

Mod
No worries. Again, not personal recs but a start!

Now the important question. What are you going to cook for Liechtenstein?

Good question! Unfortunately, I'm not too certain at this point. Some Öpfelküechli (Apple Ring Fritters) maybe?

I've just found this group. I recently read Suzanna Fisher's 90 Daze in Lusaka, http://www.angusrobertson.com.au/book...
which was interesting and based on the author's time there.

reply | flag
message 40: by [deleted user] (new)
Aug 14, 2013 07:50AM
Anyone got something by an author who lived in São Tomé and Príncipe for at least two years? I read a book about the literature of ST&P for my challenge, but the authors examined have no books in English.

Osho wrote: "Anyone got something by an author who lived in São Tomé and Príncipe for at least two years? I read a book about the literature of ST&P for my challenge, but the authors examined have no books in E..."

Osho wrote: "Anyone got something by an author who lived in São Tomé and Príncipe for at least two years? I read a book about the literature of ST&P for my challenge, but the authors examined have no books in E..."

This is an obscure book and no longer on Goodreads (and is probably boring as heck):

Sleeping Sickness: A Record of Four Years' War by Bernardo Francisco Bruto da Costa. The author was a government official in São Tomé and Príncipe back in the 1920's. I am pretty sure he lived there at least two years, although I can't find much about him.

There is also a short story writer named Gervásio Kaiser (also not on Goodreads). I don't know if you have a length requirement - his short stories are pretty short. Two of his stories that have been translated to English are Native Dance: An African Story and The Stranger.

Here's another one by a native author:

Here's the Penguin Great Journeys series--excerpts from longer works. They're short, nicely made, and mostly available from $.01 to $4.00 used at Amazon. You can see the regions on the spines, and should be able to see the countries from descriptions of the books: 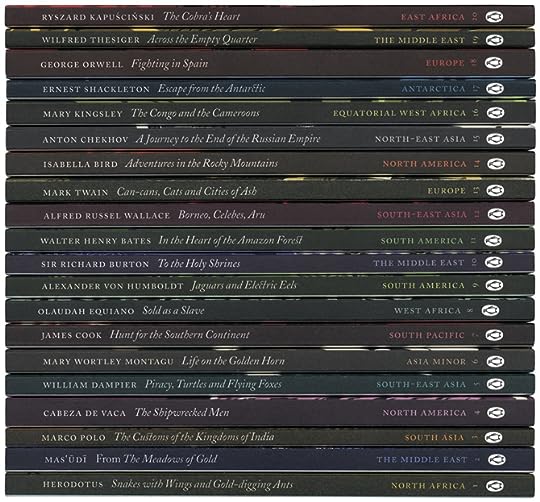 Very helpful Stelleri! Thanks for sharing!

I now have all but two books of this series in hand, so let me know if I can give you information about any of them. I'm looking forward to reading the set!

Mod
Anyone have suggestions for books set in the Turks and Caicos Islands?

Ann Morgan who spent one year reading around the world (the work of author's who came from each of those countries) and then recently published a book about the experience has published a list of all the recommendations she was given during that year. You can find it here:

The List - Ann Morgan's Year of Reading the World

I didn't find anything written by or set in the Turks and Caicos Islands though.

Mod
Thanks Claire - I've seen the list before - it's a great list and I've now bookmarked it. And yes, it doesn't have any books for Turks and Caicos so still on my quest...