Tommy needs the opportunity to stand on his own—even if that means another separation from Brett. Passing Shadows by M. King, available from Dreamspinner Press. 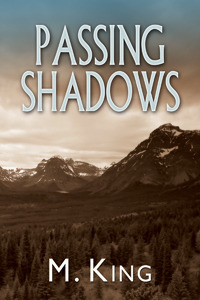 After serving six years for murdering his abusive father, Tommy Hawks is released from prison. He moves back in with what’s left of his family and tries to negotiate a new life with them and his partner, Brett, who has stood by him through everything. But moving on isn’t so easy.

For six years, Brett Derwent sacrificed any chance of a normal life: he spent his college fund on defense lawyers, drove hundreds of miles to visitation days, and had his love letters read by strangers and his phone calls monitored by jailers. Now he and Tommy are faced with the monumental task of starting over as adults when they hardly had the chance to begin together as teens.

Resentment simmers just below the surface, but so do gratitude and guilt. Brett and Tommy need to give each other the time and space to discover who they are individually, and Tommy especially needs the opportunity to stand on his own—even if that means another separation.

Oooh! I loved the first book! Sooo much!. Can't wait to read this one.