167 views
What Else Are You Reading? > Does anyone know the title of this book or the author

A few years ago I read a series of book and for the life of me I can't remember the name of the author or any of the three titles. I was wondering if anyone recognized the books and would have any of that information.

In book one it was a space story, colonizing an alien planet. The significant part of this story is the great donut like wheels of vegetation (I think they might have been an animal) but the sentient being of these wheel where actually micro organizes that evolved on the planet.

The second story involved what seemed to be basically space faring medieval humans. It focused around two women with special abilities, especially language. They had to travel to another world to set up a very important trade agreement. (again the thing that made at least one of these women special was the microorganism living in her brain, unlocking her own human potential.)

The final book is place in a very scifi kind of world. We learn the micro-0rgamism basically colonize human brain. They have a city within you. For the most part this is a desired state and a cooperative arrangement but the organisms have learned they can control there human host by altering their brain chemistry. The human's basically become addicted to the microorganisms and will do what ever they are told to do. Our hero/hero's is one woman and her colony trying to stop the evil organisms from taking everything over and infecting everyone.

I am pretty sure I read at the time the author is a real biologist and I think she puts these book out like 10 years apart.

I don't know but they sound good to me. Would be be the author of A Door into Ocean? She's a biologist I think. 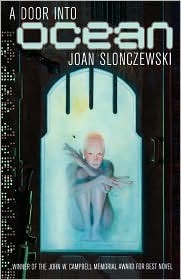 That is exactly who it is and the third book was Brain plague. Thanks so much I just couldn't remember and I wanted to reread and it looks like she has more out, Awesome.

And I think A door into the Ocean was the second book I read. I'm not sure yet which was the first book.

Good job Tamahome! Are you sure you're not secretly a librarian?

Maybe I have the librarian gene?

A Door Into Ocean (other topics)