14 views
Out There > Corn Field

Outside of the village is a gaint corn field with so many mazes and roads it's easy to get in. Mortals are not allowed to be in the fields at night, but during the day you can sometimes see them hard at work. Some people go missing though...if you ever get lost there is a cabin in the center of the field. But that's if the outside creatures - the ones who are forbidden from entering villages - don't kill you first. 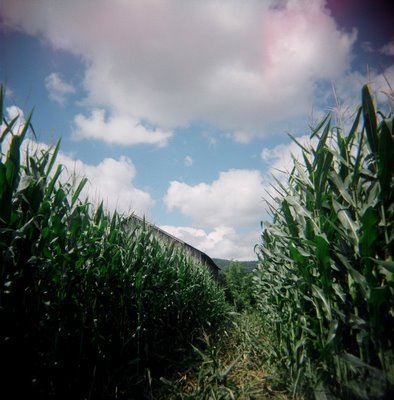 Lydia walked alongside the cornfield, plucking off some of the leaves and letting them fall to the ground. She found her way out always so easily. Simple. Fleeing the outside creatures weren't that hard. Except she usually ended up arguing with them or something. But she was fine. Perfectly fine.

Pine skipped around the corn field, her bright blonde hair bouncing as her porcelain skin seemed to have beautifully painted features. Oh, the lovely Pine. She heard Lydia and grinned evilly. Of course, no seducing Lydia then killing her to feed her need of new......fertilizer. She was going to "play" with her.

Amara was laying the the center of the corn field, right next to the cabin. She didn't know why, but this was one of her favorite places to escape to, and it was also Adorians most hated place for her to go.

Emily ~Everybody Talks~ wrote: "Pine skipped around the corn field, her bright blonde hair bouncing as her porcelain skin seemed to have beautifully painted features. Oh, the lovely Pine. She heard Lydia and grinned evilly. Of co..."

((You do realize Lydia's a creature and she can't be really killed that easily. How can you hear her anyway? She's just killing the leaves. -.-))

Lydia snapped off a corn, before throwing it. So annoying. These people have to do things right. Now being stupid idiots. "People who can't do anything right shouldn't do anything at all." she said in disgust.

(( She is a 'mist' right? That would mean she would be able to make herself 'gas-like' or have Intangibility(go through solids) right? Hahaha, like someone like that would be killed easily, physical attacks would be useless practically, unless the combatant knows how to deal with such things. ))

((Yeah sure she can make herself like that, and people can't touch her once she's in that form. It would be impossible to kill her. Almost. She's not invincible but she won't be so easy to be killed.))

Daniel's hands were tucked tightly into his front pockets, his breath visible around him. Keeping his gaze down he ignored the crunches of leaves around him; he was used to being watched.

A boy in a black shirt banged shoulders with him, forcing him to stumble b
ack and fall into the tall abyss of leaves. He could for just a second - just a small second - see the fear on the boys face before he took off. His feet following closely ehind him. He pushed himself up with his same old expression. Brushing his arm off he looked from left to the right. The boy was nowhere in sight.

He pulled out a cigarette from his back pocket lighting it with his neck craned forward. He took a breath or two of it before he began walking again.

Lydia ripped off the ears of corn again. "Hopeless corn. It had no chance anyway." she said coldly. She should be doing something better. But she wasn't. Did it matter to her? No.

Madness looked around hearing a voice. He stopped dead in his tracks. He started mumbling.