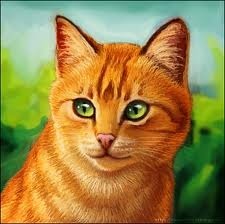 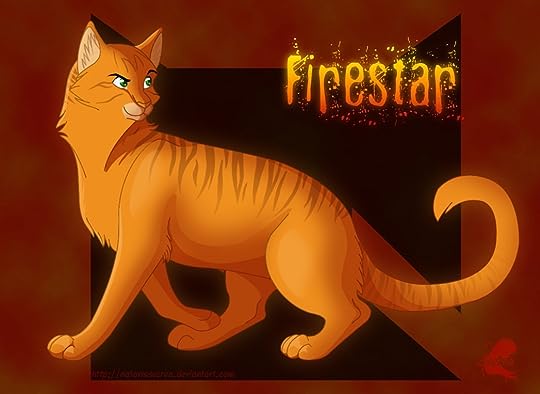 [image error]
Go on Youtube and type this out: Firestar and Sandstorm love story.

Firestar is so patient how did he ever put up with Yellowfang? i mean she is so ugh whats the word....?

Yellowfang is a hero in my opinion. She went back and tried to save Halftail when the fire raged through Thunderclan's camp and while her and Fireheart could not save Patchpelt, they tried. Don't forget that she is the one that told Fireheart that he is the fire that will save Thunderclan. She was a good mentor to Cinderpelt, guiding her through the realization that she would never be a warrior but teaching her well in the ways of being a medicine cat. Firestar is the embodiment of all things that are good and that is why he will always be the best warrior and leader of all times. I really like that his father was Jake, Tallstar's best friend from when he was Talltail and had left the clan for awhile. No wonder Firestar and Tallstar always got along. I wonder if Tallstar ever told Firestar that he knew his father :)

reply | flag *
message 15: by [deleted user] (new)
May 21, 2014 06:44AM
I don't think Tallstar ever did tell Firestar anything and I don't think Tallstar even knows that Jake is Firestars Father so I don't think that Tallstar would dare tell Firestar that he knows his father anyways it would spark something that should have never been sparked but anyways Bluestar or Spottedleaf told him not Yellowfang she told him about Brokenstar and how the leader of shadowcaln is her son but i don't know maybe im wrong.

Tallstar does know that Jake is Firestar's father, just look at the manga short in the back of the Warriors Super Edition book Tallstar's revenge, it's from Tallstar's POV, and, at the end of the manga short, he(Tallstar) is welcomed to STARCLAN by JAKE!!!

Tallstar does know that Jake is Firestar's father, just look at the manga short in the back of the Warriors Super Edition book Tallstar's revenge, it's from Tallstar's POV, and, at the end of the manga short, he(Tallstar) is welcomed to STARCLAN by JAKE!!!


I didn't read that about when Tallstar died and went to Starclan but by then he and Jake were old cats. I think it fitting that while Jake was a kittypet that he was there to greet Tallstar as they were best friends. Also, because Jake is Firestar's father I guess he was welcomed into Starclan as well. I think that is awesome! Maybe when Firestar went to Starclan he will be greeted by him and Tallstar as well. Maybe we will see that in BRAMBLESTAR'S STORM if they do a section on Firestar enetering Starclan :)

Tallstar does know that Jake is Firestar's father, just look at the manga short in the back of the Warriors Super Edition book Tallstar's revenge, it's from Tallstar's POV, and, at..."

what am I going to do?

Yeah, it was when he got his 9 lives. I think Tallstar's father told him that he'd see a cat who looked like Jake, who was obviously Firestar.

Crowleaf wrote: ":D"
Firestar is the most bravest cat!!!

Tallstar does know that Jake is Firestar's father, just look at the manga short in the back of the Warriors Super Edition book Tallstar's revenge, it's from Tallstar's POV, and, at..."
Actually, if you read it, you will see that Jake says that he is not in starclan, he just was there to welcome him.