This topic is about Jax Cordoba
note: This topic has been closed to new comments.
18 views
Author Spotlight - book excerpts > Jax Cordoba - September 9, 2012

This week our Spotlight author Jax Cordoba has adult novels out but just released his first YA book:

Bio:
Jax Cordoba grew up learning the gift of gab from his Irish family, and soon turned his talent of weaving oral tales to writing silly stories. After college, a Journalism degree with a minor in computer science led, with a surprising twist, into software design.
Years of toil later, Jax returned to his silly stories, hoping to provide inspiration, and maybe a chuckle or two, to the younger generation struggling with bullies and all the other nasties of the world. He promises, hang on, it gets better.

From the author:
I've had other m/m works published under the name Jackson Cordd, but this is my first Young Adult novel.
In my original story concept, Calvin was a recent college grad moving to a new town for his first job. But, after watching an episode of the "Ellen" show, where Ms. Degeneris was dealing with the subject of bullying and teen suicide, she said, "We must all, in our own way, try to reach out and help."
Those words continued to resonate in me, and I soon realized, Calvin's story would work even better if he were a high school student. The end result is "Fate Lends a Leg". I hope the readers enjoy the novel as much as I enjoyed writing it.
And, I'm suspecting this won't be my last YA novel. It seems Brian, the ex Cal left behind in Virginia, also has a story to tell. 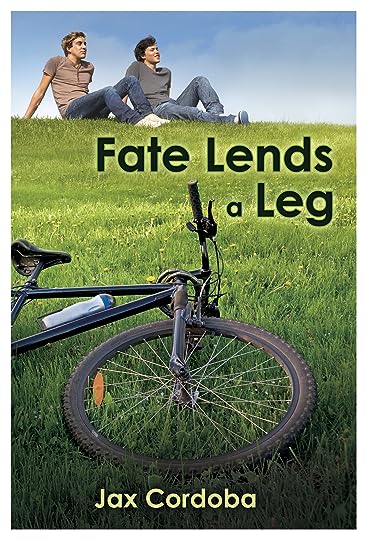 Blurb:
Teenage Olympic running hopeful Calvin Granger arrives in his new town angry about changing schools--again--and sad about leaving his boyfriend behind. Then he meets skittish cyclist Bill Moilet, and soon strange dreams and thoughts of Bill distract Calvin from his misery ... until Calvin breaks his leg and his Olympic ambitions crumble.

Cal's injury does have one up-side: it brings him closer to Bill, who offers to help him out while he's recovering. But whenever they start to get too close, Bill clams up or disappears. To add to Cal's frustration, living with a full-leg cast proves to be another miserable experience.

When Bill finally begins to open up to Cal, the strange dreams become more vivid--dreams, Cal learns, that they both share. Can the boys decipher what their subconscious minds are trying to tell them, or is history doomed to repeat itself?

Much sooner than Cal would have expected, Bill returned. Cal watched Bill fight with the driver’s seat, pulling it up as far as it would go before he could comfortably reach the pedals. Cal handed over the car keys.

“Just that burger joint down the road is fine.”

Bill started the car. A rockabilly song came through the speakers. He reached over and turned the radio off before putting the car in gear and backing slowly out of the driveway.

Bill drove without speaking, his light eyes darting from one mirror to another, then out ahead again.

Steel. That’s the color, Cal thought. The color of Bill’s eyes shined like the gray-blue of Damascus steel.

Pulling into the lot of the restaurant, Bill glanced over at Cal’s cast. “Just drive-thru, I assume?”

Bill pulled up to the speaker and placed Cal’s order, but didn’t get anything for himself.

They pulled up to the window. Cal reached forward toward the little tray in the center console to grab his wallet and noticed that Bill jerked his hand away. Watching more closely, Cal fished out some money and handed it to Bill, who sort of shrank back slightly before taking the cash and paying the employee. Bill handed over the change and the fast-food bag, being careful not to touch Cal.

While Bill drove them back to his house, Cal kept a careful watch on him. Even though Bill’s eyes were always focused on driving, when Cal leaned over slightly toward him, Bill would also move over. It was like Cal had an invisible force-field around him that nudged Bill away when he moved closer.

And Bill seemed completely unaware he was doing it. The strange behavior struck Cal as very odd.

Back at the Granger house, Bill turned off the car. “Which one is the house key?” Cal pointed to the key.

Bill jumped out of the car and rushed around to the passenger side, then opened the car door and retrieved the crutches from the backseat before handing them to Cal. As Cal slowly crawled out of the Camaro and managed to stand, Bill hurried to the porch, unlocked the front door, then came back to get the fast-food bag. Bill closed the car door when Cal was safely out of the way. He then ran back to the porch and held the screen door open for Cal. After they got in the house, Bill followed behind, still carrying the food bag as Cal slowly made his way to the dining room.

Cal noticed in all of his super-speed running around, Bill never got within twelve inches of him. He sat down at the end of the dining table. While he fought with the crutches and tried to find a convenient place to put them, Bill put the bag on the table in front of him.

Cal smiled appreciatively. “Did you want—”

“Can’t stay, Mom will have dinner waiting,” Bill announced as he left.

“Hey, you want to—” Cal yelled out before he heard the front door close. “—drive me to school tomorrow?” he said to an empty room.

Cal ate his dinner, just thinking about Bill. He was a puzzle wrapped in an enigma. Taking another bite of the hamburger, Cal didn’t know which he should try to figure out first.

Late that night, after finally falling asleep, Cal had the weird dream again. He stood in a forest, surrounded by trees, and he desperately had to find something. He tried to take a step forward, but his right leg felt strangely numb, and he couldn’t seem to bend his knee. But he had to move, had to find—

Then the jolt of the cast banging into his left knee as he tried to roll over woke him.

As that sense of desperation faded, Cal struggled to go back to sleep.