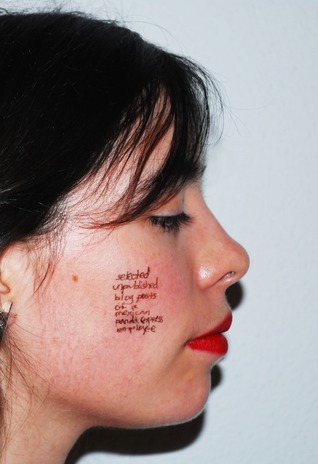 Stirring exposition? Over-sharing? Blogger and essayist Megan Boyle lays bare her innermost thoughts with her debut collection of confessional poems, Selected Unpublished Blog Posts of a Mexican Panda Express Employee. Culled from blog entries dated from 2009 to 2010, Boyle reflects on her life in Baltimore with titles ranging from "everyone I've had sex with" to "lies i have told." Her inventory of emotions reads like a diary, but its form signifies the ever-evolving way that people are communicating online.

Boyle's poems, short stories, and essays have been published by Thought Catalog, Vice, and 3:AM Magazine. In 2010, she cofounded MDMAfilms, an experiment in extreme mumblecore filmmaking, with her husband, writer Tao Lin. Boyle shares "a collection of photos of my apartment and places I'd go to write."

Goodreads: For you, what is special about blogging as a means to access creativity?

Megan Boyle: When I sit down to write a story or essay I usually need to trick myself into thinking I'm doing something else first, even though my initial impulse to create happens spontaneously and effortlessly. I've never been taught how to construct a "good" blog entry: my blog hasn't been graded or workshopped; blogs aren't anthologized. I'd start typing into a blogger.com draft window, and it would feel like I was transcribing my thoughts into a vacuum. There was no pressure, and I could invent my own set of formal expectations, so I think that allowed me to be uninhibited, and my ideas flowed easier.

GR: Your output is intensely personal. What motivates your level of sincerity? Do you find it necessary to hold anything back for yourself?

MB: Every person is an individual mass of potentially sincere or insincere output. If someone is acting "insincere" it probably means they're wanting to project an idealized version of themselves—which isn't any less real than their "less ideal" self, just like "up" isn't any less real because "down" exists; the process of getting to know a person becomes longer because it now requires guesswork. I always want to fast forward a person's coding to get to the thing writing it, which to me seems infinitely more complex and interesting, but also unreachable because I'm never going to enter someone else's consciousness. I like reading things that make me feel like I sort of can, though.

A lot of my book is just the result of me milking my brain for boring, intimate details because I think boring, intimate details about people are funny and honest and comprise so much of what life feels like to me. I also don't like, ooze sincerity. I lie. Being honest seems like the best method of connecting with another person, but it feels easiest when I'm alone and typing things into a computer.

GR: Do you expect your writing and filmmaking will intersect? What's next for you as a writer?

MB: Recently I read about this technology they're developing to visually map the brain's images, which is something I've wanted to exist for a long time. It would be like an empathy machine. That's immediately what I thought when I tried to imagine a future where my writing and filmmaking intersect. I honestly haven't thought much about my future with filmmaking.

Working on a bunch of nonfiction things for websites and magazines, mostly. About every two years, if I've lived in the same place or developed a lifestyle routine, I start feeling restless and easily distracted, so that's going on right now. I'd like to learn how to drive trucks or work on a cruise ship or maybe a farm. Truck driving appeals the most, I've been drawn to that for a few years, I have good ideas when I drive.

Good to hear, it is always good to learn from other peoples idea....

I always want to fast forward a person's coding to get to the thing writing it, which to me seems infinitely more complex and interesting