Posted by Goodreads on July 6, 2009
11 likes · 0 comments
With a hint of danger and a whiff of the supernatural, Alice Hoffman's portraits of family life are anything but mundane. Influenced by magic realism and fairy tales, and tethered to emotional human drama, Hoffman is best known for the novels Practical Magic and Here on Earth (an Oprah's Book Club pick). Her new book, The Story Sisters, follows the downward spiral of a charismatic but damaged older sister named Elv, who invents a fantasy world to cope with a childhood trauma. Hoffman talked with Goodreads about inventing the language Arnish for The Story Sisters and why she lets her characters have their own way.

Goodreads: In The Story Sisters, Elv careens into dangerous territory, experimenting with drugs and sex. Throughout this journey, Elv's mother is arguably ineffective. As a parent, do you feel there's a limit to what an adult can do for a child?

Alice Hoffman: Some readers are frustrated with her—almost hostile—and I don't get it. I think it is very easy to blame the parent. Part of what the story is about is that siblings can grow up in the same house and live in the same room and experience similar traumas, and still be so different. Also, parents and children live in separate worlds. To think that you know what your child's life is like, or what your mother's life is like—no matter how close you are—you can never really know. And now I've been on both sides, and I know that this is true both ways. I think she's a good mother. I think she's an overwhelmed mother. She doesn't get what's going on because she doesn't want to, because it's so tragic and sad to think that your child has experienced something horrible and you couldn't protect them. But I see her as a very good mother.

GR: Fairy tales have become a motif in your work. Did you read them as a child? What about fairy tales intrigues you?

GR: There is a fascinating dynamic among the three sisters. Is there something magical about the number three? How did you shape the interaction of their three distinct personalities?

AH: So often there are three sisters, three brothers, three quests. I think it is a very mystical number. I don't feel that I do shape their relationship. The characters shaped it. It just kind of happened; they become who they were, and then everything that happened among them followed. I think my work is very character-driven, and once the characters are who they are, I just follow them.

GR: The Story Sisters is full of evocative imagery, including smells, as reflected in Annie's observation, "Claire smelled like vanilla, Meg like apples. Elv's skin gave off the scent of burning leaves." You used to paint your office the color of the book you were working on. What kind of brainstorming work do you do with imagery?

AH: I had totally forgotten until you asked me this, but there was a certain candle that I was burning the whole time that I was writing. I don't remember anything specific about scents or odors, but I got this candle in Barcelona, and it smelled like roses. And now it is missing! I don't know what happened to it. It was just for this book. I also tend to listen to music, and I listen to the same thing over and over again. It's a rhythm, but I don't have to pay any attention to it.

GR: The three sisters sometimes talk to each other in a fictional language, Arnish, the language of their imaginary world of Arnelle. How much of the language did you define? Did you create a grammar?

AH: I did, but I was creating a language begun by young girls, so I didn't have to do a Tolkien kind of grammatical study. So I just did what I thought a 14-year-old girl would do. It has a grammar and vocabulary, but it is simplistic.

GR: You wrote your first novel at age 21 (Property Of), and now you've published 19 novels, two works of short fiction, five young-adult novels, and three children's books. Have you seen your style change and grow over the years?

AH: Yes, I think it has changed. Artists have themes that they go back to—that they are haunted by and obsessed with. I certainly think that's true of me. My first novel, Property Of, was just re-released by Farrar, Strauss in the classics division, and that novel was also about a teenage girl, but in that book there are no parents. There are no adults! Now I have a fore sense of story, more than I used to.

GR: Do you see any overarching relationship among your many books?

AH: This is maybe a terrible thing to say, but I think it's bad for writers to think too much about what their themes are, or to over-intellectualize their own work. I think it is much better for readers to think about that. They are not defensive, so they usually understand it at a different level, a purer level. I don't want to understand it too thoroughly. I just want to do it.

AH: If I'm writing, I usually get up early. I like to get up at 4:45 a.m. I like to write when no one else is awake, the phone isn't ringing, and nothing is happening. I write for usually about two hours, and then I might stop and have coffee or exercise, and then I go back to it. But I always feel like those first two hours produce my best work.

GR: Is it true that you like to write a very fast first draft?

AH: Yes, it really is. I feel that if I didn't, I'd stop. I'm like a shark—I have to keep swimming, or I sink. I think I would become so censoring and self-critical that I wouldn't be able to continue.

GR: Does the first draft hold up, or is it followed by a lot of revision?

AH: A lot of revision. For instance, from the original draft of The Story Sisters, there are probably 60 pages that are the same. And even those 60 pages are hugely rewritten.

GR: What are some of your favorite books and authors?

AH: My favorite book of all time is Wuthering Heights. Here on Earth was my homage to Wuthering Heights. I think it is the most psychologically brilliant book ever written. I also felt very affected by Ray Bradbury's books and by a lot of fantasy and science fiction. Also, The Catcher in the Rye.

AH: I've been working on a sequel—which I've never done before—to my teen book, Green Angel. It is called Green Witch, and it will be out in March 2010. I had a lot of letters from people who didn't think the story was over, and I realized that it wasn't over for me either. I didn't know if I could do it—if I could be back in that world with that character—and it worked out. It was really fun for me to do. 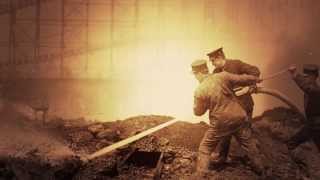