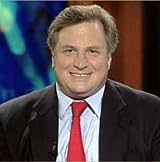 Self-described conservative Dick Morris is credited with masterminding President Bill Clinton's reelection in 1996. But that was a long time ago. These days he's a well-known critic of the Clintons and a bestselling author of political commentary. His latest book, co-written with his wife, Eileen McGann, Fleeced: How Barack Obama, Media Mockery of Terrorist Threats, Liberals Who Want to Kill Talk Radio, the Do-Nothing Congress, Companies That Help Iran, and Washington Lobbyists for Foreign Governments Are Scamming Us, and What to Do About It, takes on both the Republicans and Democrats. He's also a frequent commentator on Fox News and a weekly columnist for The New York Post. Morris talked with Goodreads about Fleeced and what campaign advice he has for Senators McCain and Obama.

Goodreads: What does it mean to be "fleeced" in the United States?

Dick Morris: Fleeced talks about the rip-offs that we're exposed to on a daily basis in the United States, which we're seeing coming home to roost on the stock market and with the financial crisis. For example, credit card companies are now charging incredible interest rates, as high as 30% for people who have committed very minor sins — like being a few days late in paying. In fact, sometimes credit card companies raise the interest rates just simply based on another creditor who is complaining that you're late in paying him. You can be perfectly on time in paying credit card A, but because you're late in paying credit card B, credit card A raises your interest rate by 8 or 10 points. Those kinds of practices are just outrageous, and they're the product of no government regulation at all. The reason they don't regulate is that the courts have held that the regulator needs to be in the state in which the credit card company operates, not the state in which the borrower lives.

We also talk about how 425 inmates have been released from Guantanamo, and 50 of them have been found on the battlefield shooting at American soldiers. We know this because we've had to capture them again or kill them. We talk about the problem of unsafe toys coming in from China, which is fueled by the absolute failure of the federal product safety commission to regulate effectively things coming into the country — toys and other merchandise. And when Congress passed legislation increasing the size of their budget, giving them more inspectors and giving them more power, the head of the agency asked the president to veto it, because she said she didn't want that extra power because she didn't believe in intense government regulation.

And, of course, we have a whole chapter devoted to how the sub-prime crisis got started. We make the point that the people who precipitated that are now long gone. They're not the big Wall Street houses that are going broke now — those are the people who are left holding the paper. The real sinners are people like Countrywide, the mortgage company, the CEO of which has long since bailed out with a $55 million golden parachute. We also talk about Congress' total lack of action on regulation of the sub-prime crisis, regulating of the mortgage lending, Freddie Mac and Fannie Mae. It is a whole book about rip-offs going on in the United States.

GR: Given your extensive experience in running campaigns, what is your critique of the campaigns run by Senators McCain and Obama? What advice would you give each of them in this final month?

DM: McCain needs to hammer away at one of the things we talk about in the book: the tax increases that Obama has proposed. It is clear that with the current fragility of the economy, tax increases would just tip us over into a horrific depression. We need to realize that the Great Depression was caused not so much by the stock market crash of 1929 as by the tax increases that were passed in 1932, which triggered the big banking crises of 1933, when Roosevelt had to close the banks when he took office.

From Obama's point of view, he is facing a situation where essentially the Iraq war is winding down and his spending programs seem impractical. What he needs to do now is articulate a vision that is relevant to the current situation, rather than simply do what he's done before, which is just to say, "I have my old vision — I'm just going to implement it more slowly."

GR: The majority of Goodreads members are under the age of 40. It follows that we have a lot of young voters. How do you think young voters will affect the presidential race?

DM: When they lowered the voting age to 18, people were surprised by the lack of power and the lack of cohesion among younger voters. This is the first election in which young voters have really played a key role in the campaign. I think they are clearly for Obama. They've had a great deal to do with his surge, and they really made his candidacy possible. A lot of attention is paid to the African American vote, which was significant for Obama, but people under 30 are twice as numerous as African Americans. Their votes have been just as heavily for Obama and just as important. They want change. They want a different kind of political leadership in the country, an end to the war in Iraq, and I think Obama will give them what they want. The story here is not so much the potential of the young vote but the fact that it is actually reshaping this election.

GR: You run a website, Vote.com, an online ballot box where anyone can log an opinion on public issues. How do you think the Internet has shaped political campaigning in recent years?

DM: The Internet has totally changed everything about politics, and the changes will be even more profound in the future. I think that the use of the Internet for fundraising has really made the old system of reliance on a few wealthy donors and a few special interests essentially obsolete. It has created a situation where large masses of small donors, who represent no special interest, can dominate the political process. I think it has accomplished campaign finance reform. It would never be accomplished by legislation, but it is being accomplished by the fact of Internet fundraising dominating the process.

The second biggest fact is that it has created an alternative to spending money for winning elections. Money doesn't matter that much because of the free communication both through YouTube and through people emailing one another and blogging. The old phenomenon, which is that you had to spend a certain amount of money to be able to win an election, is increasingly going away. More and more, elections are being determined based on the content of what you have to say, not the amount of money that you have. Through both of these connections, the Internet has been revolutionary and incredibly positive. In the future, television advertising will no longer be particularly important in political campaigns, because with the growth of the Internet, fewer people are watching television, and that trend is going to continue. Ultimately, on the Internet, advertising is effective, but it doesn't have nearly the power of a television commercial. But paid communication in a political campaign is becoming less important than free communication.

GR: Is it harder to control the message online?

DM: Yes. Candidates become, in effect, franchises, and people adopt them, take them over for themselves, and speak about their political views in their name. Each of the campaigns control probably only about a quarter of the things that are said on their behalf. It must drive them crazy. The average campaign manager probably can't even keep track of what's being said in the campaign, much less generate it.

GR: Thanks for talking with us!