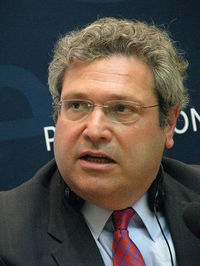 Born
in Athens, Greece
September 26, 1958
Genre
Politics, Nonfiction
edit data
Robert Kagan is an American historian and foreign policy commentator. Robert Kagan is the son of Yale classical historian and author, Donald Kagan. He is married to Victoria Nuland, the former U.S. ambassador to NATO, and has two children. He is the brother of political commentator Frederick Kagan.

Kagan is a columnist for the Washington Post and is syndicated by the New York Times Syndicate. He is a contributing editor at both The New Republic and the Weekly Standard, and has also written for the New York Times, Foreign Affairs, the Wall Street Journal, Commentary, World Affairs, and Policy Review.

“Americans, in foreign policy, are torn to the point of schizophrenia. They are reluctant, than aggressive; asleep at the switch, then quick on the trigger; indifferent, then obsessed, then indifferent again. They act out of a sense of responsibility and then resent and fear the burden of responsibility they have taken on themselves. Their effect on the world, not surprisingly, is often the opposite of what they intend. Americans say they want stability in the international system, but they are often the greates disrupters of stability. They extol the virtues of international laws and institutions but then violate and ignore them with barley a second thought. They are recolutionary power but think they are a status quo power. They want to be left alone but can't seem to leave anyone else alone. They are continually surprising the world with their behavior, but not nearly as much as they are continually surprising themselves.”
― Robert Kagan, The World America Made
tags: americans, foreign-policy, military-theory
8 likes
Like

“Foreign policy is like hitting a baseball: if you fail 70 percent of the time, you go to the Hall of Fame.”
― Robert Kagan, Dangerous Nation: America's Place in the World from Its Earliest Days to the Dawn of the Twentieth Century
5 likes
Like

“International order is not an evolution; it is an imposition. It is the domination of one vision over others- in this case, the domination of liberal principles of economics, domestic politics, and international relations over other, nonliberal principles. It will last only as long as those who imposed it retain the capacity to defend it.”
― Robert Kagan, The World America Made
tags: international-relations, military-power, order, political-science, war
5 likes
Like