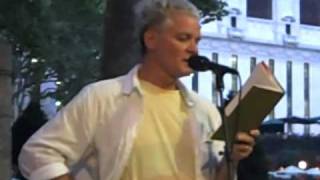 Charlie hasn't connected with their friends on Goodreads, yet.

· 709 ratings · 136 reviews · 61 distinct works • Similar authors
More books by Charlie Smith…
Quotes by Charlie Smith  (?)
Quotes are added by the Goodreads community and are not verified by Goodreads. (Learn more)
“...it is not news that we live in a world
Where beauty is unexplainable
And suddenly ruined
And has its own routines. We are often far
From home in a dark town, and our griefs
Are difficult to translate into a language
Understood by others.”
― Charlie Smith
4 likes
Like

“The Meaning of Birds

Of the genesis of birds we know nothing,
save the legend they are descended
from reptiles: flying, snap-jawed lizards
that have somehow taken to air. Better the story
that they were crab-apple blossoms
or such, blown along by the wind; time after time
finding themselves tossed from perhaps a seaside tree,
floated or lifted over the thin blue lazarine waves
until something in the snatch of color
began to flutter and rise. But what does it matter
anyway how they got up high
in the trees or over the rusty shoulders
of some mountain? There they are,
little figments,
animated---soaring. And if occasionally a tern washes up
greased and stiff, and sometimes a cardinal
or a mockingbird slams against the windshield
and your soul goes oh God and shivers
at the quick and unexpected end
to beauty, it is not news that we live in a world
where beauty is unexplainable
and suddenly ruined
and has its own routines. We are often far
from home in a dark town, and our griefs
are difficult to translate into a language
understood by others. We sense the downswing of time
and learn, having come of age, that the reluctant
concessions made in youth
are not sufficient to heat the cold drawn breath
of age. Perhaps temperance
was not enough, foresight or even wisdom
fallacious, not only in conception
but in the thin acts
themselves. So our lives are difficult,
and perhaps unpardonable, and the fey gauds
of youth have, as the old men told us they would,
faded. But still, it is morning again, this day.
In the flowering trees
the birds take up their indifferent, elegant cries.
Look around. Perhaps it isn't too late
to make a fool of yourself again. Perhaps it isn't too late
to flap your arms and cry out, to give
one more cracked rendition of your singular, aspirant song.”
― Charlie Smith, Indistinguishable from the Darkness
1 likes
Like