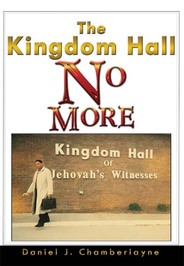 NOW AVAILABLE AT BARNES & NOBLE, AMAZON AND BOOKS A MILLION


I'm the author of my freshman book, "The Kingdom Hall No More"

NOW AVAILABLE AT BARNES & NOBLE, AMAZON AND BOOKS A MILLION

“If you have no critics you'll likely have no success. ”
― Malcolm X
497 likes

“Be peaceful, be courteous, obey the law, respect everyone; but if someone puts his hand on you, send him to the cemetery.”
― Malcolm X
tags: islam, militancy
779 likes

TV We've Just Watched — 602 members — last activity Jun 11, 2020 07:10PM
A place to give your recent impressions of a TV show you just watched, a series you love or one you've just discovered.

Plain White T's Fan Club — 30 members — last activity Nov 28, 2009 10:27AM
heres the place who are fans of plain white ts.if u love emo punk rock or love songs this is the place for u
More of Daniel’s groups…

Diane Chamberlain
author of
The Silen...

Liz Rettig
author of
My Desper...

Daniel Chamberlayne
author of
The Kingd...

I pray your day is a blessed one. Please visit http://theuniqueview.blogspot.com/ and enjoy the read. My goal is to encourage and motivate using my life experiences.

Peace to you all

I appreciate the love!

Don't be a stranger!


Hello Daniel!
Thank you for the friend request!
Nice to meet you! :)

Hello Daniel, it is a pleasure to meet you. If you ever have any questions about Harlequin or our books, please feel free to ask.

Hi Daniel! Thanks for the add!

Thanks so much for friending me!

Thanks for your friendship. I look forward to our future interactions.

First, I am blessed that goodreads affords us the opportunity to be friends. Therefore, I wanted to invite you as a fan and request your support for my book.

Many are being healed from the pages of this book. I thank God that I did not allow my fears to hinder my progress to get this book out. Transparency is the antidote that has touched several. My journey is to help others through the healing process--an intrepid life's journey.

Please help me get this book out to others by recommending it and spreading the word.

Thank you for all of your support

Daniel, thank you for the friendship.

Hi Daniel, stopped by to see what's new on your page. Have a great week.
Blessings CJ

I don't get to Goodreads nearly as often as I'd like because I'm writing my 4th book. So, I wanted to make sure and stop by and let you know that I am thrilled to be your friend here! Are you on twitter? My twitter name is: linc0lnpark

Have a fantastic day!

Thanx for the add...

HELLO TO ALL MY GOODREADS FRIENDS !

MY FRESHMAN BOOK IS NOW AVAILABLE TO PURCHASE !

Good Morning to all my friends !!

Here is an excerpt from Chapter 16 called "Disfellowshipped"

Then all the Elders closed their Bibles simultaneously. They said if I had anything else to comment on about the matter I should do so now. I thought long and hard. I really didn’t have anything to say. In my mind, I wanted peace and closure, to finally move on no matter what their decision was. I said, “No, I have nothing to say.” They stated that their position of being Elders was a very difficult one. They had to adhere to bible scriptures for reproving, correction and for discipline. It was not always an easy task but it had to be done in order to keep the congregation morally clean. Brother Ivory and Brother Badstone looked at Brother James for him to speak. What needed to be said finally came out. Brother James stood up and looked right at me. He was void of any facial expression. He said, “Danny, we have come to a unanimous decision that you will be expelled from the Christian Congregation of Jehovah’s Witnesses, and no longer to have any association with Jehovah’s Witnesses in good standing until you produce works or fruits that is befitting repentance and find it in your heart to return to being in Jehovah’s favor. You are not allowed to participate in any Field Service activities and are restricted from commenting at the meetings.” Brother James continued, ”If you believe that a serious error in judgment has been made, and you wish to appeal the decision of this committee, you may do so by writing a letter clearly stating your reasons for an appeal. You have a week from today to do so. An appeal committee could again hear the case.” He then asked if I understood what he just said and I told him that I did. Then Brother James said, “If you felt that I or Brother Ivory or Brother Badstone weren’t fair in this decision, another committee can be arranged and that request must be in writing as well. If there isn’t a written appeal received by next weekend, we take it that you won’t be appealing our decision and an announcement will be made at the Kingdom Hall next Thursday night that you have been disfellowshipped. If you request to be reinstated, a written plea of reinstatement must be made to the body of Elders no matter what congregation you attend. You will have to go through us for recommendation.” He had a smirk on his face, sounding like the King of all Elders when talking. I guess he wanted to let me know no matter what congregation I attended; there wouldn’t be a loophole or a way of escaping them. I would always have to go through them because they were the original committee from where I was disfellowshipped. I didn’t care. I don’t remember if a prayer was said to conclude the meeting, I just remember leaving. Brother James dismissed me from his house like he would a dog. And then, it was all over. The double life was now single. There I was alone. I kept saying, “I’m disfellowshipped.” and started thinking about what that really meant. I felt like I lost everything but couldn’t really explain what I had lost. One part of me wanted to jump for joy. I wanted to yell and call all my Kingdom Hall peeps and tell them the good news. The other part of me wanted to hide somewhere. I was ashamed to be disfellowshipped. I didn’t want to be seen by anyone again. I only knew a handful of people that were disfellowshipped. Just about all of them used to study the Bible with me at one point in time. I would to see them after they were disfellowshipped months or years later, and they sure didn’t look well spiritually, mentally, physically and financially. They all had this lost look about them and they appeared confused about life. I wondered if I would become like them. Will Jehovah put a curse on me so I would never be successful no matter what I did in life all because I’m disfellowshipped?