Goodreads helps you follow your favorite authors. Be the first to learn about new releases!
Start by following David Bohm.
Follow Author

“A great many people think they are thinking when they are merely
rearranging their prejudices.”
― David Bohm
95 likes
Like
“Perhaps there is more sense in our nonsense and more nonsense in our 'sense' than we would care to believe.”
― David Bohm
tags: particle-physicist-s-view
76 likes
Like
“
Suppose we were able to share meanings freely without a compulsive urge to impose our view or conform to those of others and without distortion and self-deception. Would this not constitute a real revolution in culture? ”
― David Bohm
tags: culture
55 likes
Like
“The ability to perceive or think differently is more important than the knowledge gained.”
― David Bohm
50 likes
Like
“There is a difficulty with only one person changing. People call that person a great saint or a great mystic or a great leader, and they say, 'Well, he's different from me - I could never do it.' What's wrong with most people is that they have this block - they feel they could never make a difference, and therefore, they never face the possibility, because it is too disturbing, too frightening.”
― David Bohm
37 likes
Like
“Ultimately, all moments are really one, therefore now is an eternity.”
― David Bohm
32 likes
Like
“Universe consists of frozen light.”
― David Bohm
tags: quanta, science
22 likes
Like
“Space is not empty. It is full, a plenum as opposed to a vacuum, and is the ground for the existence of everything, including ourselves. The universe is not separate from this cosmic sea of energy.”
― David Bohm
21 likes
Like
“Indeed, the attempt to live according to the notion that the fragments are really separate is, in essence, what has led to the growing series of extremely urgent crises that is confronting us today.”
― David Bohm
19 likes
Like
“For both the rich and the poor, life is dominated by an ever growing current of problems, most of which seem to have no real and lasting solution. Clearly we have not touched the deeper causes of our troubles. It is the main point of this book that the ultimate source of all these problems is in thought itself, the very thing of which our civilization is most proud, and therefore the one thing that is “hidden” because of our failure seriously to engage with its actual working in our own individual lives and in the life of society.”
― David Bohm
19 likes
Like
“Thus, in scientific research, a great deal of our thinking is in terms of theories. The word ‘theory’ derives from the Greek ‘theoria’, which has the same root as ‘theatre’, in a word meaning ‘to view’ or ‘to make a spectacle’. Thus, it might be said that a theory is primarily a form of insight, i.e. a way of looking at the world, and not a form of knowledge of how the world is.”
― David Bohm, Wholeness and the Implicate Order
19 likes
Like
“But what is [the] quality of originality? It is very hard to define or specify. Indeed, to define originality would in itself be a contradiction, since whatever action can be defined in this way must evidently henceforth be unoriginal. Perhaps, then, it will be best to hint at it obliquely and by indirection, rather than to try to assert positively what it is.

One prerequisite for originality is clearly that a person shall not be inclined to impose his preconceptions on the fact as he sees it. Rather, he must be able to learn something new, even if this means that the ideas and notions that are comfortable or dear to him may be overturned.

But the ability to learn in this way is a principle common to the whole of humanity. Thus it is well known that a child learns to walk, to talk, and to know his way around the world just by trying something out and seeing what happens, then modifying what he does (or thinks) in accordance with what has actually happened. In this way, he spends his first few years in a wonderfully creative way, discovering all sorts of things that are new to him, and this leads people to look back on childhood as a kind of lost paradise. As the child grows older, however, learning takes on a narrower meaning. In school, he learns by repetition to accumulate knowledge, so as to please the teacher and pass examinations. At work, he learns in a similar way, so as to make a living, or for some other utilitarian purpose, and not mainly for the love of the action of learning itself. So his ability to see something new and original gradually dies away. And without it there is evidently no ground from which anything can grow.”
― David Bohm, On Creativity

Wholeness and the Implicate Order
1,158 ratings 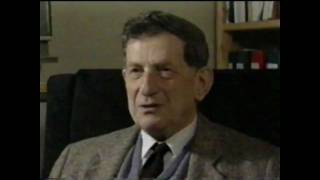