Goodreads helps you keep track of books you want to read.
Start by marking “Chasing Lance: The 2005 Tour de France and Lance Armstrong's Ride of a Lifetime” as Want to Read: 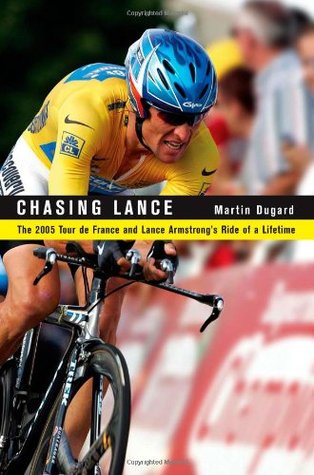 We’d love your help. Let us know what’s wrong with this preview of Chasing Lance by Martin Dugard.

Chasing Lance: The 2005 Tour de France and Lance Armstrong's Ride of a Lifetime

To ask other readers questions about Chasing Lance, please sign up.

Be the first to ask a question about Chasing Lance

Start your review of Chasing Lance: The 2005 Tour de France and Lance Armstrong's Ride of a Lifetime

Feb 26, 2017 Lois Keller rated it liked it
I learned things about professional cycling, but I also wanted to shake the author sometimes. No one cares what you ate for breakfast!! We don't care about you - we read this book because we wanted to know what Lance ate for breakfast.

Jan 06, 2011 Jason rated it really liked it
Recommends it for: Cyclist and those thinking about going to the Tour
Recommended to Jason by: Doug
Good casual book about the 2005 Tour de France and Lance Armstrong's attempt to win 7 times. It was filled with great Tour details, historical references and tidbits about the authors travels while covering the Tour. Very interesting; I learned more about the Tour than I had know when I started the book even though I have followed the Tour over several years. Some of the information was basics, but that is understandable since it's a book for many audiences.

Jan 06, 2011 Adrian Colyer rated it liked it
Shelves: sport
A bit formulaic (standard one-chapter-per-stage format for these type of books). Didn't provide the insights into the racing itself that the blurb suggested it might, and contained a couple of basic errors in some of the tour facts presented. But it is an interesting insight into the lives of those who *follow* the tour, and into the Lance-mania in the tour circus at the time.

Sep 09, 2016 Gene rated it it was amazing
If you read this book hoping for a tell-all about Lance & drugs you'll be disappointed, but if you want insight into professional bike racing & the Tour de France, this is very good. Well written with a lot of inside information about personalities as well as how the Tour works & what watching in person is like.

Jun 16, 2008 Rebecca rated it liked it
So interesting! I did not know much about cycling or the Tour de France before I read this but now I'm really looking forward to watching this year's race on TV. This book was a little bit cycling history, French/world history, Lance Armstrong biography, a behind the scenes look at the Tour and overall an entertaining and inspiring story.


This book seems to be more about the author's time in France rather than about Lance. Lacking the objectivity of a sports reporter (a sad statement in and of itself). For a much better book about Lance and The Tour de France, try 23 Days in July.

Feb 10, 2014 Eric rated it really liked it
Shelves: sports
Good book even if you are a little done with the whole Lance drug thing. Such a good read to know what it's like to follow Le Grand Boucle. As others have said, this is partly a cycling book and partly a guide book to traveling around France, in this case, Chasing Lance.

Jun 20, 2010 SJH (A Dream of Books) rated it liked it  ·  review of another edition
Shelves: sport
I really liked this book. It was part-travelogue, part-biography and part-sports book, following Lance Armstrong on his record breaking seventh tour win.

Jul 23, 2011 Shannon rated it liked it
Some cool facts about the Tour de France.

Feb 28, 2015 Stuart Hatcher rated it did not like it
a good read in itself shame that it turned out to be fantasy by way of lance anyway but well written

Sep 14, 2011 Jeff rated it really liked it
Very quick read, really liked it. Not as much about Lance as it is about Dugard's experience following Lance on his last Tour victory.