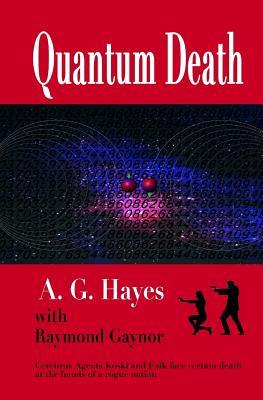 4.00
3 ratings2 reviews
Rate this book
Koski and Falk come up against what very well may prove to be their most complex and dangerous case yet: The Quantum Death Machine. For the first time, Koski and Falk must separate during a mission. Each faces mortal peril, while, at the same time, their smoldering relationship begins to heat up. The fifth in the riveting Koski and Falk Series by multi-award-winning author A. G. Hayes with Raymond Gaynor, author of TOTAL MELTDOWN (Borgo/Wildside)"

QUANTUM DEATH (Savant 2016) by A. G. Hayes with Raymond Gaynor (that's me) is a great re-read, re-re-read and, as of today, re-re-re-read. To me, that's the acid test of a good thriller: It's got to have enough embedded within the story so that, like the best of rollercoasters, it remains a thrilling experience when experienced again and again. Part of its staying power, I believe, are the protagonists, Koski and Falk, whose relationship changes throughout the previous five books in the series, and will continue to do so. Another part of its staying power is that it is more aptly a politico-techno-thriller with distinctly humanistic overtones that can be re-read from any of these distinctly different points of view. Another part is that while clearly fictitious, it could almost qualify as historical fiction, in that everything from politics to technology to thrills are plausible extensions of existing sticky situations within the world today. Finally, as in "real life," not all of today's "good" and "bad" guys who appear in the novel end up such.

In short, QUANTUM DEATH is a somewhat complex, sometimes sit-back-and-yell, sometimes thoughtfully cerebral work that I hope readers will find worth not only reading, but re-reading, re-re-reading and re-re-re-reading, like me.
Liz
1,632 reviews38 followers
January 6, 2017
I won a copy of this book in a Goodreads giveaway.
Wow! This book epitomizes my definition of a thriller. It had me from the get go and kept me interested until the last page. It was an intriguing concept with great characters. It was more than simply a good read ... it was also a challenge to the mind. I want to go back and read the earlier books in this series.
Displaying 1 - 2 of 2 reviews