Discover new books on Goodreads
See if your friends have read any of A.G. Hayes's books 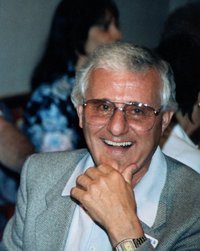 I have done a change of pace so to speak with my latest book, "Chang The Magic Cat." This is is both a book and a working script for little theatre groups. I am not charging Royalties to groups who buy the book and use it to be their playbook. Those in the know will understand this is a great saving to the players. I have taken off my Thriller hat and written a cheerful rollicking adventurous scre Read more of this blog post »
Like  •  1 comment  •  flag

“Eternity is not something that begins after you are dead,it is going on all the time.
CP Gilman.”
― A.G. Hayes
1 likes
Like

“Reality is always so obstructive.”
― Eric Ambler, Epitaph for a Spy
19 likes
Like

“Never miss the opportunity to keep your mouth closed.”
― A.G.Hayes
2 likes
Like

“A person who searched rooms, brandished pistols, dangled promises of half a million franc fees for nameless services and then wrote instructions to Polish spies might reasonably be regarded with suspicion. But suspicion of what?”
― Eric Ambler, The Mask of Dimitrios
5 likes
Like

“Never tell a lie when you can bullshit your way through it”
― Eric Ambler, Dirty Story
40 likes
Like

“Yet, when these facts are seen side by side with other facts in the case, it is difficult not to become lost in superstitious awe. Their very absurdity seems to prohibit the use of the words 'chance' and 'coincidence.' For the sceptic there remains only one consolation: if there should be such a thing as superhuman Law, it is administered with sub-human inefficiency.”
― Eric Ambler, The Mask of Dimitrios
tags: chance, fortune
18 likes
Like

GOOD REVIEWS — 8045 members — last activity Feb 04, 2023 02:14PM
This Group is only for authors who are looking for reviews and Reviewers who love to read books and share their reviews.

Langley suckers — 184 members — last activity Jan 31, 2023 08:51AM
If you love to read anything about spies, international intrigue, special ops, clandestine services, and anything about CIA, this group is for you....

With his heart fluttering like a bird, the old wino stumbled down a trash-strewn alley, desperately seeking a hiding place. His mind was fuzzy from muscatel and the fact someone had attempted to kill him while he slept in his cardboard box in the doorway of a shoe store on Hollywood Boulevard at three in the morning. He leaned against a wall and gasped for air, wondering who wanted to kill him. Not the cops, he could die on the street for all they cared.

Cocking his head, he heard footsteps; slow, measured and deliberate as a pallbearer. A cold wind flicked a crumpled newspaper down the alley and the stink of rotting garbage swirled around him. With one hand outstretched, he staggered forward, bumping along the wall, until he contacted the cold iron of a dumpster.

The lid was propped open, and with the last of his fading strength, the old man hiked his scrawny body up into the evil-smelling container. He was reaching up to release

the bar holding the lid open, when a hand grasped his wrist in a powerful grip, and a flashlight beam blazed in his face. He screwed his eyes shut, his corneas reacting to a burst of luminous blue light. In the grip of his unknown assailant, he felt the sleeve of his threadbare jacket pushed up to his elbow, then a needle slid into a vein, and a sudden reeling in his brain made him aware a powerful drug coursed through his bloodstream. Then a voice whispered. “Don’t fight it -- just close your eyes.”

This is rather interesting and true. I spoke to someone the other day who had shaken hands with Wernher Von Braun designer of the V2 rocket. The handshaking took place at my friends high school in Alaska, and when he said, "I shook hands with Von Braun." I replied, Von Braun shook me out of bed when his first V2 hit London. I was a young soldier going home on leave, and I was staying overnight at an army club on the Strand. The government withheld the news on the V2, saying it was a bomb that had hit a gas main that caused such a huge explosion. Later we were given the truth.

In memory of the OSS/SOC intelligence service agents who made D-Day, 6 June 1944, a reality, I'm inviting you to download a fee copy of my Kindle genre best-selling action/adventure novel, WHO'S KILLING ALL THE LAWYERS on Thursday 6 June 2013 through Friday 7 June 2013 (http://www.amazon.com/dp/B008P4WH4U) - A. G. Hayes, author of WHO'S KILLING ALL THE LAWYERS (Savant 2011), THE JUDAS LIST (Savant 2012), IMMINENT DANGER (in production).

Anthony wrote: "My second book, 'THE JUDAS LIST.' WILL BE DUE FOR RELEASE CHRISTMAS 2012. The second in a series of four Koski and Falk books.

ABOUT THE BOOK. Set in modern-day Vienna and the Czech Republic. FBI..."

In honor of Koski's birthday, I will be offering my Kindle genre best-selling action/adventure novel WHO'S KILLING ALL THE LAWYERS in Amazon Kindle format for $3.95 from Saturday 1 June 2013 through Wednesday 5 June 2013 (http://www.amazon.com/dp/B008P4WH4U). Happy Birthday Susan! - A. G. Hayes, author of WHO'S KILLING ALL THE LAWYERS (Savant 2011), THE JUDAS LIST (Savant 2012), IMMINENT DANGER (in production).

Dawn. I am on authors page to ask how do I go about submitting to you for a review of Who's Killing All The Lawyers, and would you consider it?
Looking forward to your answer.

This just in. 'Who's Killing All The Lawyers' is now on KINDLE. If you enjoy Political/Thrillers, give it a read. It is the first of a Four book series. 'The Judas List' will be available in November/December.

My second book, 'THE JUDAS LIST.' WILL BE DUE FOR RELEASE CHRISTMAS 2012. The second in a series of four Koski and Falk books.

ABOUT THE BOOK. Set in modern-day Vienna and the Czech Republic. FBI agents Susan Koski and Joe Falk, go undercover as doctors of archeology to locate the so-called ‘Judas list’ - a compendium reportedly compiled by Reichmarshall Herman Goering of individuals, and organizations who had financed World War Two with the intention of manipulating world finances for generations to come; and total control of the United Nations.