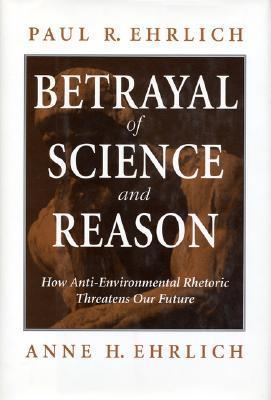 Betrayal of Science and Reason: How Anti-Environmental Rhetoric Threatens Our Future

3.74
39 ratings3 reviews
Rate this book
Despite widespread public support for environmental protection, a backlash against environmental policies is developing. Fueled by outright distortions of fact and disregard for the methodology of science, this backlash appears as an outpouring of seemingly authoritative opinions by so-called experts in books, articles, and appearances on television and radio that greatly distort what is or is not known by environmental scientists. Through relentless repetition, the flood of anti-environmental sentiment has acquired an unfortunate aura of credibility, and is now threatening to undermine thirty years of progress in defining, understanding, and seeking solutions to global environmental problems.

In this hard-hitting and timely book, world-renowned scientists and writers Paul R. Ehrlich and Anne H. Ehrlich speak out against what they call the "brownlash." Brownlash rhetoric, created by public relations spokespersons and a few dissident scientists, is a deliberate misstatement of scientific findings designed to support an anti-environmental world view and political agenda. As such, it is deeply disturbing to environmental scientists across the country. The agenda of brownlash proponents is rarely revealed, and the confusion and distraction its rhetoric creates among policymakers and the public prolong an already difficult search for realistic and equitable solutions to global environmental problems.

In Betrayal of Science and Reason, the Ehrlichs explain clearly and with scientific objectivity the empirical findings behind environmental issues including population growth, desertification, food production, global warming, ozone depletion, acid rain, and biodiversity loss. They systematically debunk revisionist "truths" such as:


population growth does not cause environmental damage, and may even be beneficial
humanity is on the verge of abolishing hunger; food scarcity is a local or regional problem and is not indicative of overpopulation
there is no extinction crisis
natural resources are superabundant, if not infinite
global warming and acid rain are not serious threats to humanity
stratospheric ozone depletion is a hoax
risks posed by toxic substances are vastly exaggerated
The Ehrlichs counter the erroneous information and misrepresentation put forth by the brownlash, presenting accurate scientific information about current environmental threats that can be used to evaluate critically and respond to the commentary of the brownlash. They include important background material on how science works and provide extensive references to pertinent scientific literature. In addition, they discuss how scientists can speak out on matters of societal urgency yet retain scientific integrity and the support of the scientific community.Betrayal of Science and Reason is an eye-opening look at current environmental problems and the fundamental importance of the scientific process in solving them. It presents unique insight into the sources and implications of anti-environmental rhetoric, and provides readers with a valuable means of understanding and refuting the feel-good fables that constitute the brownlash.

87 books67 followers
Paul Ralph Ehrlich is an American biologist and educator who is the Bing Professor of Population Studies in the department of Biological Sciences at Stanford University and president of Stanford's Center for Conservation Biology. By training he is an entomologist specializing in Lepidoptera (butterflies), but he is better known as an ecologist and a demographer, specifically for his warnings about unchecked population growth and limited resources. Ehrlich became a household name after publication of his controversial 1968 book The Population Bomb.

3.74
39 ratings3 reviews
5 stars
11 (28%)
4 stars
11 (28%)
3 stars
15 (38%)
2 stars
0 (0%)
1 star
2 (5%)
Displaying 1 - 3 of 3 reviews
Sovfedfreg
1 review
June 20, 2021
Written by Paul R Ehrlich, a writer whose only other major work was debunked long ago, this book hides behind the facade of environmentalism and is, in reality, purely Malthusian, and this is not even mentioning that this book was in fact written by Ehrlich more as a rant, after they lost a bet of 10,000 to a person who argued that natural resources aren't going to run out as Ehrlich had predicted (look up Simon-Ehrlich bet on Wikipedia).
Russellbarabe
86 reviews
June 27, 2011
This book was a very interesting read. It labeled right-wingers who deny global warming and over-population as the "brown lash" and their denial of science and data is the reason for the title. The book is good overall and provides many good talking points relating to environmental issues and the science that supports each issue. I would recommend to anyone.
John
457 reviews5 followers
Read
August 23, 2007
nonfiction,science,naturalism