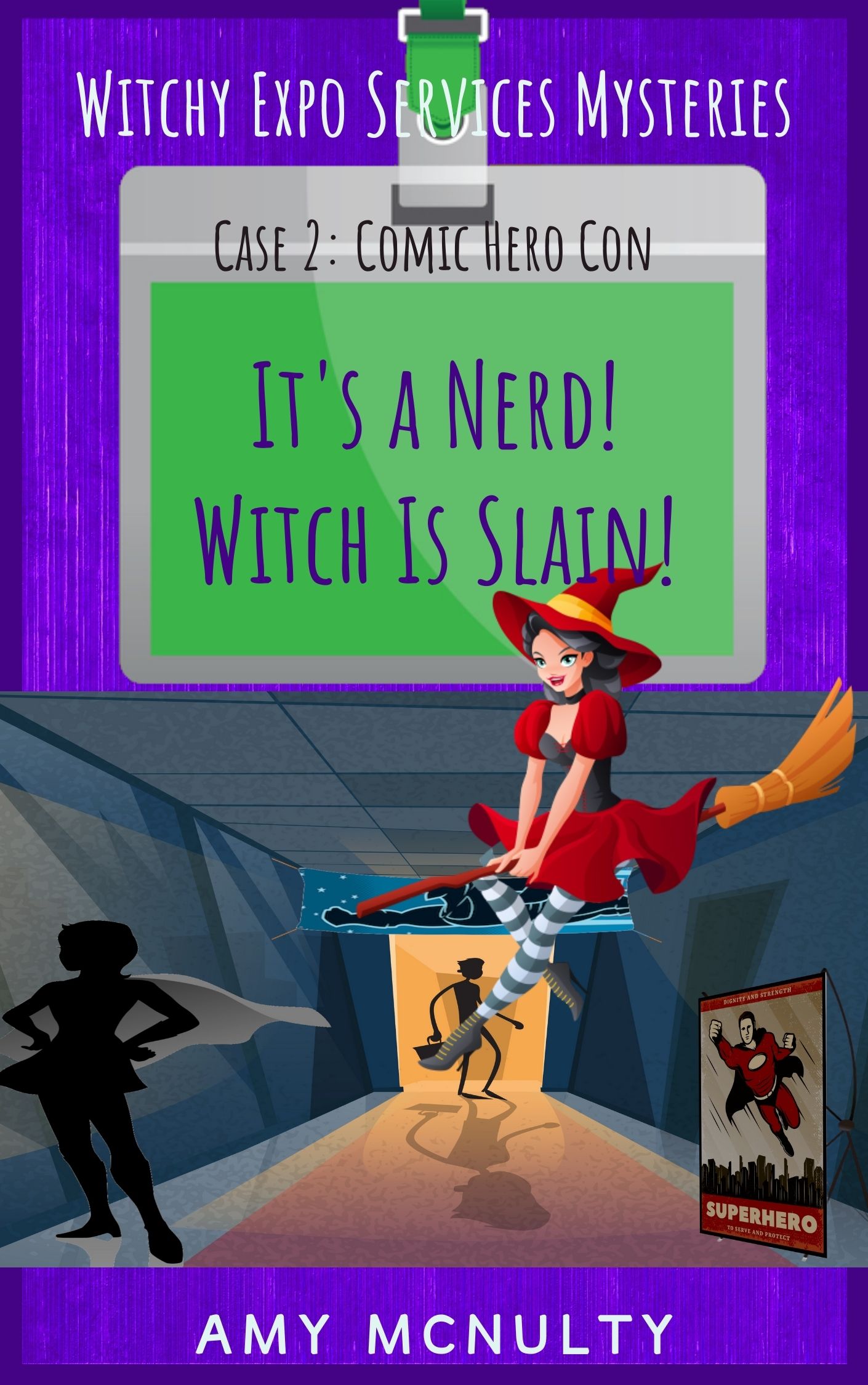 It's a Nerd! Witch Is Slain!

4.63
8 ratings2 reviews
Rate this book
Witchy Expo Services. We host your convention, expo, or trade show—with a dash of magic!

Nimue Toothaker, recently named co-Head Witch General Manager of Witchy Expo Services, is finally getting a handle on the job—and the dual-personality warlock with whom she shares it. While the fallout from the murder at her first convention as manager certainly led to plenty of publicity, she’s not eager to repeat the dreadful experience for her largest con yet: Comic Hero Con, which brings in comic book fans and comic hero film buffs from around the world.

The highlight of the con? One of the biggest stars in the mega comic hero film franchise of the century. Unfortunately, his real-life persona is nothing like his on-screen one, and it’s up to the Witchy Expo Services staff to make sure the neurotic celebrity shows for his advertised con appearances. To make matters worse, the head of the group that booked the Cauldron Cove Convention Center for the con doesn’t know what she wants—but she knows she isn’t happy with Nimue and her staff’s top-notch efforts.

Juggling two eccentric VIPs is just the start of Nimue’s problems when a Cauldron Cove witch turns up dead on the showroom floor. Because of the town’s magic, the convention must go on—and Nimue and her co-workers will have to table their grief until they can figure out if there’s another murderer in the convention center. It’ll take a heroic feat, but they have to beat the villain on the loose before it’s too late.

31 books495 followers
Amy McNulty is an editor and author of books that run the gamut from YA speculative fiction to contemporary romance. A lifelong fiction fanatic, she fangirls over books, anime, manga, comics, movies, games, and TV shows from her home state of Wisconsin. When not editing her clients’ novels, she’s busy fulfilling her dream by crafting fantastical worlds of her own.

Case Two: Comic Hero Con The newest event at Witchy Expo Service is the annual Comic Hero Con sponsored by the Comic Enthusiast Society, and excitement is buzzing over the appearance of non-magical Maverick Vanedestine, the star of the new Stellar Comics Extended Universe movie. However, Nimue learns that despite working with a few magical people on his films, he is, in fact, terrified of witches. Then, a “Code Red!” sends Nimue and her team on a mission. Mia Estrada, the new head of the Comic Enthusiast Society, demands a particularly magical booth at the convention be changed, the star of the event is found writhing on the floor in fear, and a dead body is found in the convention room. With humans and witches roaming the area, will the investigation ruin the event and send the community into peril?

Amy McNulty has created a fascinating magical environment adding unique elements to the mythology of witches and warlocks and overlapping human and magical worlds in a realistic manner. It is not a secret or hidden world since humans can participate in the special magic and the variety of witches’ familiars including Nimue’s unique dragon. This offers interesting opportunities for cohabitation, collaboration, and conflict. The victim, albeit a surprise, brings to light issues with strogaphobia, insights into a criminal organization, and some shocking connections and hidden identities. It’s a complicated tale with a large cast of human, magical characters with all the different familiars, and lots of spell casting, but it was easy to follow once the core group is identified and the witchy world is understood. Nimue is a delightful, determined and capable, with a unique knowledge of both worlds that help blend the two communities together. Gowdie, Nimue’s familiar dragon, is a clever sidekick using a telepathic link to communicate with Nimue offering her insights, advice, and “just in the nick of time” support. I enjoyed the bit of romantic tension or healthy romance in my cozy and there is some inklings, but I’d like more. Fun!

Disclosure: I received an ARC from the author. My review is voluntary with honest insights and comments.

Tiffany Murphy
457 reviews68 followers
October 31, 2022
The second book in the Witchy Expo Services Mysteries series is even better than the first. Nimue and her staff are absolutely delightful, well, most of them are. Nimue and Ren are getting used to working together and their strengths balance each other well. Amy is incredible at writing characters that are incredibly fun to get to know and even her villains are believable. There were so many surprises to this story that I couldn't stop reading it. I simply had to get to the bottom of the mystery. I dearly hope that there will be more books in this series.